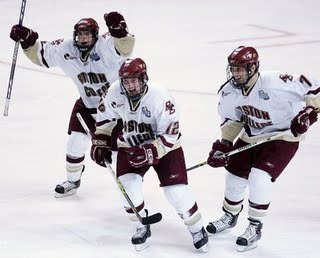 The three point weekend was good enough to keep the Eagles in 2nd place in the latest Hockey East standings behind surprising Northeastern.

For his efforts, senior forward Brock Bradford was named Hockey East Player of the Week and INCH Player of the Week. We should think so ... 8 points, 5 goals, 3 assists, +3 and his first collegiate hat trick. Beast mode. Yes, it is still November, but we need to seriously start talking about Bradford for Hobey. Someone get the website name registered ...

Minnesota is your new #1 in the latest USCHO.com/CBS College Sports Poll, after Boston U had a weekend split of UMass and Northeastern. The Eagles are up 1 spot in the polls to #4 this week, but aren't getting any first place love sitting at 6-3-1.

The College Hockey Blog has the Eagles coming in at #5 and asks the question: How good is the Beanpot going to be this year? Boston U is ranked #2 nationally, BC ranked #4, Northeastern #6 and Harvard #18.

This week's short term fan vote considers the best goal scorer and best playmaker in Hockey East history. There are a lot of Eagle greats on the list and it's a little difficult to chose one (there are 10 Eagles up for best goal scorer of 35 candidates!) Lucky for you, we've done some homework for you. Here are the Eagles stats for best goal scorer:


We aren't sure if this is the most goals ... or the best goals ... but regardless, BC Interruption endorses voting for Brian Gionta. Despite not being there in person (doh), five goals in the first period of a home game against Maine (when Maine was ... well ... Maine ... and not the Maine program of the past 2 years) won us over. Voting ends on November 23 so be sure to support your fellow Eagles!

Friday and Saturday the Eagles face the Massachusetts Minutemen for the first time this year in a home-and-home Hockey East series. The game on Friday night will be played at Conte Forum, while Saturday's match will be played at the Mullins Center. UMass goes into the weekend series with a mark of 5-3-1 overall and 3-2-1 in Hockey East play (good for 4th place).