It's easy to say the sky is falling, considering the men's hockey team got swept last weekend by Notre Dame and Maine, and our B line rivals are now the no. 1 ranked team in the country. But then again, this is college hockey. Sometimes the puck bounces your way, other times it doesn't. And unlike college football, you can drop a game here and there and it has little to no bearing on your postseason aspirations. In York We Trust. 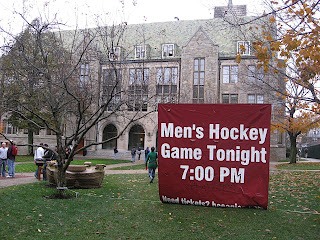 I was at this game. (Thanks to readers John and Ben for reaching out with tickets.) Here is a pretty good write-up of the game from another BC blogger.

Brock Bradford continues to pick up where he left off last season, leading the Eagles in goals and lighting the lamp in this game.

The second period. BC came out strong in the second period, resulting in Bradford's game-tying goal at the 5:41 mark. We didn't have the lead for long, however, and in the third we looked more like the team that came out in the first period.

The crowd. The student section was really into the game. Yes, I know it was Notre Dame, but the packed Conte Forum was fairly energetic for most of the game. The band's rendition of Coldplay's Viva la Vida is as cool indoors as it is in Alumni Stadium. It certainly helped that after Notre Dame's Christian Hanson scored the game-winning goal on the power play in the second period, he taunted the Superfans by slamming into the glass to celebrate.

The penalties. The penalty box was a revolving door, particularly in the first and second periods. BC failed to capitalize on a 5 on 3 opportunity and generally didn't get much of anything going on the power play.

Muse did make 19 saves, but he did let 3 goals in and didn't look like the Muse that the Irish saw last April.

The four referee system. When did that happen? The band playing Three Blind Mice to start each period doesn't even make sense anymore! Let the kids play: there were way too many ticky-tack penalties called in this game.

On the man advantage. BC went 0 for 10 on the power play, which as a statistic in and of itself, looks pretty awful. Worth mentioning that a lot of those were shortened power plays based on taking some pretty dumb penalties. BC added 6 more unsuccessful power plays in Sunday night's upset loss to Maine. Yes, it was considered an 'upset' loss to Maine. That is how far Black Bear hockey has fallen.


Next up: BC has a road game against Merrimack on Friday in North Andover. That game will finish up the regular season series against the Warriors. The Eagles beat Merrimack 4-1, 4-3 (OT) in a weekend home-and-home back on October 30-31.


On to other college hockey news ...

As previously mentioned, Boston University (6-1-0) is the new #1 in the latest USCHO.com/CBS College Sports men's poll. The Terriers only played once last weekend, beating UMass Lowell on the road 6-4 last Friday. BU was last ranked #1 in the final poll of the 2006 season, after beating our Eagles in the Hockey East championship game.

Boston College drops to #5 this week as their overall record drops to 5-3-0. Fellow Hockey East members New Hampshire and Northeastern occupy spots #6/7, respectively, Vermont is #15 and Massachusetts drops one spot to #20. The College Hockey Blog ... not so impressed. The Eagles check in at #7 this week. INCH is even less impressed with the Eagles of late.

Hockey East fan voting. The next poll runs from November 13 to November 23 and includes polls on "Best Goal Scorer" and "Best Playmaker." We haven't seen the ballot, but might we suggest Brian Gionta and/or Nate Gerbe? The last fan ballot was for "Best Hockey East Goaltender" and went to Providence's Chris Terreri. BC's Cory Schneider finished in the Top 10 voting. APB on votes for Scott Clemmensen.

Is there an East coast bias in college hockey ballot voting? The College Hockey Blog explores. (Spoiler alert: no way!)

Programming note: the December 6 game between Boston University and Boston College will be shown on ESPNU, for you non-New Englanders with a ESPNU-friendly cable package. That is, if you're not celebrating victory postgame in a Tampa watering hole (poor scheduling, BC Athletics!)

Finally, here's some recent college hockey news/rumors that has been circulating regarding the possibility of Division I conference realignment. (Feel free to stop reading here if this doesn't interest you ...)

With the impending demise of the four team College Hockey America - Robert Morris, Bemidji State, Niagara, and Alabama-Huntsville (yes, apparently they play college hockey in the state of Alabama!). - the rumor is that Robert Morris and Niagara will apply to the AHA, while Bemidji State and Nebraska-Omaha would join the WCHA. UNO would leave the CCHA for the WCHA, and the CCHA would pick up Alabama-Huntsville. That would leave college hockey with five major conferences, 4 of 12 teams and 1 of 10 teams (Hockey East).

While this doesn't affect Hockey East directly, the addition of teams to the WCHA and the CCHA would further restrict the options that BC and other Hockey East teams have to schedule out of conference games, as the conference schedule would likely have to expand to a greater number of games per season for the conferences gaining more members.

The bigger impact, as Brian over at mgoblog points out, is that with the death of the CHA, there won't be any room for schools to start up a Division 1 program. Previously, schools were able to start up a program, join College Hockey America, and enjoy an automatic berth into the field of 16 if you won the conference. Now, with five mega conferences, there really isn't a good opportunity for an independent program to crop up without joining a conference.

I think the better solution is to break up these 12 team mega-conferences into something like 8 separate conferences - 2 with 8 teams and 6 with 7 teams. Break these conferences up so they are much more geographically aligned - currently Air Force plays in a conference with teams from New York, Pennsylvania, Connecticut and Massachusetts, while the state of Alaska is split between two conferences (Alaska-Fairbanks plays in the CCHA and Alaska-Anchorage plays in the WCHA). Because that makes sense, right?

The six conferences with 7 teams would be soft landing pads for other schools who want to start up D-I programs, allowing for a fairly easy expansion plan for up to 8 more D-I teams. The national tournament would then have 8 automatic bids and 8 at-large berths.

This will never happen, just a thought. Certainly more news is to come on college hockey and realignment.