We preview this weekend's crucial Atlantic Division game with Wake Forest with a game of over/under. 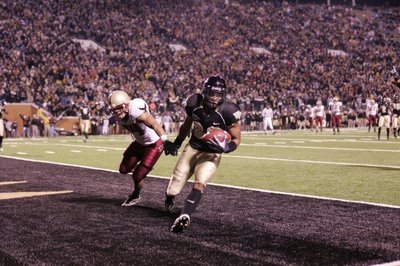 Brian: Wake Forest is currently ranked 27th nationally in rushing defense, allowing 118.0 yards per game on the ground through 10 games. The only back that has rushed for over 100 yards all season was Navy's Eric Kettani who ripped off 175 yards on the ground against the Deacons defense. Most games Wake's defense doesn't allow more than 100 yards combined. The flipside is Harris has rushed for over 100 yards in his last two games (Notre Dame and Florida State) and has rushed for 100 yards in four games this year (add Rhode Island and Central Florida). While I think we will have a similar offensive gameplan in the Wake game as we did last weekend at Florida State, I am going to go slightly under on this one. I'll say Harris gets a fair share of yardage on the ground – say around 75-85 yards – but doesn't eclipse the century mark. Under.

Jeff: What will it take for Montel Harris to have a 100 yards on the ground against Wake Forest? Harris needs to break a big run and/or BC needs to have the lead in the fourth quarter and be running the ball to seal the victory. I think the chances of BC having a good lead in the fourth are good and you never know if Harris might break one so I will say Montel does have a 100 yards rushing Saturday. Over!

Jeff: I'll say OVER! I'm saying over though only because this is touchdown-to-interception ratio and not touchdown-to-turnover. This is a very optimistic over because Chris Crane can play well and still throw one pick and no touchdowns or one and one and push.


Over/Under - 3.5 field goals made by Wake Forest and BC kickers combined on Saturday

Brian: The bad news is that Sam Swank is back for the Demon Deacons after missing the last 6 games. Swank is the school's career leading scorer and one of the best kickers in the country. When Swank was healthy this season, he averaged 2.5 field goals made per game over Wake's first four games. On the other sideline, Aponavicius is averaging 1.0 field goal per game over the Eagles first ten games. But there has been 4 games where Aponavicius hasn't hit a field goal (the most costly of those games being Clemson). I'll say Aponavicius knocks in one this Saturday and Swank hits a pair, but am going under 3.5 as four field goals seems a little steep.

Jeff: 4 field goals in any game is a lot but certainly not unheardof and with the quality of BC's defense and Sam Swank's leg, you would think there would be at least a couple of Wake field goals. The key is how many field goals BC will kick. The planets aligned for Steve to knock in two last week so this week the planets must have drifted apart at least slightly meaning Aponavicius is maxing out at 1 FG make. If Swank hits three I'll be a little surprised, but, Brian is terrible at this game and since he went under I am certainly going OVER!


Brian: We've now seen Brandon Robinson and Billy Flutie throw a pass on the reverse, albeit unsuccessfully. We haven't seen Dominique Davis hit the field since the Rhode Island game ...

Jeff: In the final two games there is certainly a chance that someone other than Crane completes a pass. It can either come off a trick play or it can come from a Chris Crane injury, or it can come from Dominique Davis getting some playing time in mop up duty after we are up three touchdowns at Wake Saturday. However, someone completing a pass is still only a push and I'm not going to take the easy way out and push so I am going under. Chris Crane will be the only QB to complete a pass for BC in the next two games. This is not what I want, but it is what I think will happen. The chances to insert Davis for a series have passed. We need Crane playing every snap. At this point all our eggs are in Chris Crane's basket.

Brian: With Megwa out for the season, I liked getting Brandon Robinson and Rich Gunnell more involved in the offense with end-arounds, trick plays and reverses. I think we'll see more of the same in our last two games as Logan will be opportunistic in his play calling. I am optimistically going to go over on this one. We will steal a play from Wake Forest's playbook with a gimmicky WR completion this Saturday, and will get an unconventional completion from someone else in the Maryland game – be it a fake punt pass or an end-around. You don't have to be accurate … you just have to throw it up for Momah to come down with it.


Over/Under - 1.5 Eagles wins on the gridiron to finish the regular season

Jeff: This can certainly go either way but I am predicted the Eagles get it done and make it to the ACC Championship game. OVER!

Brian: This is a tough question. While I am optimistic, I also have some reservations about these last two games. The Wake Forest game is always interesting and Jim Grobe's offenses always seem to give the Eagles fits. Maryland has been playing well but I'm a bit more confident about that game as the Eagles will enjoy the home field advantage. I will agree with you Jeff and go over, although I'm not going to go out and buy a non-refundable plane ticket to Tampa just yet.

Brian: Our semifinal game in the Preseason NIT is agaist Purdue, who is ranked #10 in the nation and straight up smacked around its opponents in the North Region. Purdue is led by sophomore guard E'Twaun Moore (averaging 16.3 points, 5.7 rebounds per game). While I am ever the BC optimist, I don't think that the Eagles can get past Purdue in the Garden. I hope to be in attendance, but I am not expecting an Eagles victory in the semifinal. Under.

Jeff: I would not be terribly surprised if BC gets past Purdue. I think Purdue is a little overrated this year. They have a bunch of players returning after having a decent season in the Big Ten last year but the Big Ten in basketball is similar to the Big Ten in football the last two years in that it has seen better days. After the Boilermakers, the Eagles would play the winner of Arizona/UAB vs. Oklahoma and I am just not going to predict a Boston College victory in that game. So I will go under here as well.


Brian: Last one, a bit off topic, clearing up the ACC bowl picture ...

Jeff: I have been on the road a lot yesterday and today listening to Columbia sports talk radio and Gamecock fans talk about Spurrier and their dismal performance in Gainesville on Saturday. Every radio host and seemingly every caller predicted Clemson to win the Clemson vs. South Carolina game in two weeks. I agree with them there. The only question then is can Clemson win Saturday at Virginia. Clemson is favored by a field goal Saturday so I will hesitantly go with that and say OVER. Clemson will go bowling this year!

Brian: A Lee Corso-esque "Not so fast my friend!" Clemson is not going bowling this year. I am surprised that Virginia is a home underdog in this Saturday's ACC matchup. Virginia has some impressive home wins this year in conference. They shut out Maryland 31-0, survived North Carolina in overtime, and pushed Miami (FL) to overtime. The Cavaliers are 4-2 at home this season, with their only losses coming to USC and Miami (FL) in overtime. Clemson is a mere 1-3 on the road / neutral site, and we all know the one win Clemson was able to get on the road. And don't forget, the Cavaliers are still playing for an outside shot at playing in Tampa representing the Coastal Division, while the Tigers are merely playing for a bowl berth.

Road wins in the ACC are hard to come by, and if the Tigers can somehow get past the Cavaliers, I see them falling to South Carolina in the finale. South Carolina has a week to lick their wounds from their beatdown in the Swamp and will regroup nicely. The Gamecock defense will be too much for the Clemson offensive line, and the Garnet & Black win the battle for South Carolina for only the second time in seven seasons.