NEXT: Six Words for Matt Ryan?

Share All sharing options for: NEXT: Six Words for Matt Ryan?

As part of ESPN the Magazine's 2009 NEXT campaign, there is a competition to come up with the best six word phrase to describe any of the four finalists - Ricky Rubio, Joey Logano, David Price and Matt Ryan. We got to brainstorming different ideas for Matt Ryan. It's a lot of fun. Give it a try ... 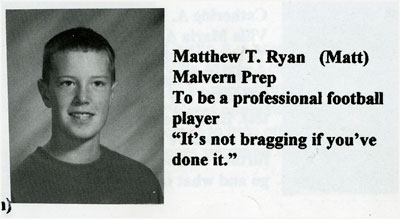 
Your turn. Leave your thoughts in the comments section and be sure to submit your ideas over at ESPN the Magazine.