Share All sharing options for: Irish Revisited, Seminoles and the Big Finish

Jeff: After Tomahawk Nation asked us a few questions yesterday, BCMike commented that you and I are in the 40% minority of BC fans that do not think that the Notre Dame game is that big of a deal. He and the other 60% of BC fans apparently think that ND is still the most important game of the year every year. Do we need to clarify our stance? Tell BCMike that he is right on although his percentages might be slightly off? Or do we need to remind him and other BC fans that Notre Dame is 1-15 in their last 16 games against teams with a winning record? 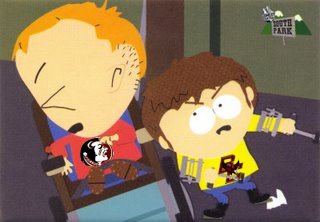 Brian: Commenter fight!! Look, first props to BCMike for sticking up for us over at Tomahawk Nation. Maybe we are in the minority, but the Notre Dame game doesn't mean much to me. It's a nice out of conference game and a cool rivalry between the two Catholic schools that play D-I football, but that's it for me. We have bigger games every year - eight to be precise. Case in point: while it was nice to beat up on the Irish last year en route to their 3-9 season, I would trade that win in a heartbeat for a win against Maryland or Florida State last year. Yes, we still would have won the Atlantic and lost to Virginia Tech in the ACC Championship game ... and 6-2 in conference play vs. 7-1 may seem inconsequential, but it's not. If the Eagles finish 7-1 last year in regular season ACC play, they go to a better bowl. After the Hokies get the Orange Bowl, the Chick-Fil-A bowl would have had to choose between the Eagles and the Cavaliers (and probably take the Matt Ryan-led Eagles over the pinot grigio drinking Wahoos). We win the Chick-Fil-A bowl, pack the Georgia Dome, and improve our travel reputation with the other ACC bowls, etc. Beating the Irish is nice, but isn't in line with the stated goal of this team every year ... winning an ACC championship and the Orange Bowl.

Jeff: There are two factors working here that make the Notre Dame game less significant that it was back in the Big East days. First back in the Big East days, we had NO chance in recent memory of winning the conference until the one lame duck year in 2004 after Miami and Virginia Tech left. Now, BC has a very legitimate chance of going to the ACC Championship Game each year and with the ACCCG comes the chance of playing in a BCS bowl. That is big time. No matter how enjoyable a Notre Dame beatdown can be, it does not compare with a trip to a BCS bowl. Secondly, Notre Dame was terrible last year. If they continue to improve, the game in 2010 will be a much bigger deal than it was this year, but if they continue with their seasons of being unranked, it is hard to get too too excited about Notre Dame.

Having said that, I do not agree completely with you, Brian. I would not take a win over Maryland any year over a win over Notre Dame. Notre Dame is a football rival with us, while Maryland is not. Notre Dame is another private Catholic school with similar academic standards to BC so it creates a great rivalry because many BC students also apply to Notre Dame and vice versa. I don't think too many BC students spent their senior years of high school deciding between BC and Maryland. In my opinion the ND-BC rivalry is not dying, but is falling slightly, and only slightly, from BC's perspective because of the move to the ACC and Notre Dame's lack of recent success.

Brian: Stop right there. You misunderstood my point. It's not that I want to beat Maryland instead of Notre Dame every year. Replace Maryland with any other ACC team name if it betters our chances of going to a more significant bowl game each year. We aren't going to play in better bowls if we leave room for these bowl selection committees to pick teams other than BC. So the more games we can win in conference, the fewer teams can be considered for the same ACC bowls.

Also, in the Big East, BC was competing directly with Notre Dame for bowl selections as Notre Dame could take up a slot in one of the Big East bowls. Now we don't have to worry about Notre Dame when it comes to ACC bowl selection. Since BC is a member of a conference and Notre Dame isn't, I would argue the BC game is more important to the Irish's season than it is to the Eagles. Reason is because Notre Dame's path to a BCS bowl hinges on all 12 of their games ... for the Eagles, we can get to the BCS by taking care of business in conference.

On to the big ACC Atlantic showdown this weekend. Jeff, based on all the back and forth in blogfrica yesterday, do you think the Seminoles are looking past the Eagles?

Jeff: I am not going to say yes, but I will say it wouldn't surprise me. Give me three keys to winning the game.

What is the biggest mismatch you see between the Eagles and Seminoles tomorrow?

Jeff: Placekicking, without a doubt. Gano is a very, very good kicker for Florida State. Do we even know yet who is going to get the nod for the Eagles?

Brian: No, I don't know who is handling field goals for the Eagles.

[UPDATED] As a result of the on-campus brawl on Wednesday night, Florida State has suspended 5 players for the game tomorrow. Taiwan Easterling, Bert Reed, Corey Surrency, Cameron Wade and Richard Goodman will all be suspended for the Boston College game.

Brian: The popular sports website The Big Lead is going with the Eagles ... while your girl, HD, is not. You surprised?

Jeff: HD has been wrong about us more than she has been right. In fact, I'd guess her record for BC games is 3-6. I feel better that she picked against us this week.


Jeff: BC men's hockey tries to rebound from last weekend's sweep when they play tonight at Merrimack. Who ya got?

Brian: Bradford continues his hot streak and lights the lamp and the Eagles rebound against Merrimack 3-1.


Brian: The University of North Carolina at Charlotte (a.k.a. Charlotte 49ers) has voted to begin a college football team by 2013. How many years until they join the Big East?

Brian: ... or the South Florida plan.


Brian: The director of the ACC-affiliated Music City Bowl thinks there are too many postseason games. Jeff, your stance?

Jeff: Right now, yes, there are too many bowls. If you are at the point where you might not have enough eligible teams, that is a HUGE problem. But come 2013, at least UNC-Charlotte is one more potential bowl team!


Jeff: Last one, give me two predictions. First, the women's soccer game against Central Connecticut State this afternoon at the Newton Campus in the first round of the NCAA tournament. Second, the big game tomorrow night - Boston College at Florida State.

Brian: First, what are the chances the women's soccer team plays Central Connecticut the same day the men's basketball team tips off against Central Connecticut? I literally know next to nothing about this year's women's soccer team, but I do see that they beat CCSU earlier this year at home 1-0. I will go by that very same score and say the Lady Eagles advance to the next round of the NCAAs.

As for this weekend's football game, back in August I initially predicted a low scoring affair while you thought the it would be quite the opposite. I'm staying with my relatively low-scoring prediction. Eagles get it done on the offensive side of the ball and the Eagles find creative ways to get into the end zone. Eagles 21, Seminoles 19. Yes, that is a touchdown and 4 field goals.

Jeff: Oregon State? I think you are hoping they'll win and keep USC out of the Rose Bowl. Jumping on the Penn State bandwagon!

Brian: You bet I'm hoping for Oregon State to go to the Rose Bowl.

Because the Rose Bowl, Pac 10 and Big Ten deserve to take one on the chin every now and again for standing on ceremony and annually squashing any talk of a college football playoff. I'm sure the Rose Bowl will love another 45-14 Penn State beat down of the Beavers. The rooting interest is always chaos.

Jeff: My picks are all road teams this week.

Jeff: Brian gets to pick his games first since he is trailing so he clearly did not pick the Eagles +6.5 despite predicting an Eagles victory today. On Wednesday though, he gave BC less than a 50% chance of winning the game. Brian is just not quite sure what will happen Saturday night.

Brian: Why do we play the game, Jeff? We play to WIN THE GAME. While I am predicting an Eagles victory today, I am more confident in my five games than I am the Eagles.

Good luck to all the Eagles teams in action this weekend. Get to a game watch to enjoy the Saturday night football game between BC and FSU with your fellow Eagles fan. I will most likely be crossing the Hudson River this time around and watching at the New Jersey game watch. Stop by and say hello. Go Eagles!