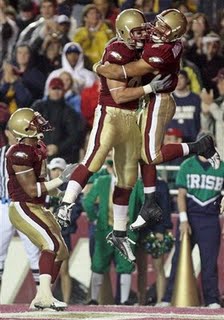 Brian: Jeff, you were able to watch the game more closely than I was, tell me what you liked about the Eagles 17-0 win over the Irish.

Jeff: In short, there was not even one second of the game where I thought the outcome was in doubt. Even after Steve Aponavicius missed the first field goal. This was dissappointing but I never thought it would come back to haunt us because the team was looking good early.

Brian: Yes, the field goal kicking continues to be a problem. Should Jags start Aponavicius next week, or should he throw Quigley out there at this point? If this week's game against Florida State comes down to the kicking games, huge advantage to Florida State.

Jeff: We should not attempt field goals until the game is in hand and at that point we only attempt them with Quigley to give him some experience. You laughed when I said this last week but I really mean it. I do not want to see a place kicker on the field this Saturday for anything other than XPs. If we lose, we lose, but at least Jags will be giving the team the best opportunity to win. Putting one of our kickers out there no matter what the distance is not giving our team the best chance to win.

Looking back at the game though, BC forced 5 turnovers and blocked a punt and only won by 17. Should that concern us?

Brian: Absolutely it's a concern. I know you are more confident than I am for Saturday's 8pm game with Florida State, but I don't see how the Eagles will be able to move the ball against the Seminoles defense with the same conservative offensive play calling Logan employed in the Clemson and Notre Dame game. Sure Harris was able to rush for over 100 yards but he picked up a lot of that yardage in garbage time in the fourth quarter. In order to beat FSU, we are going to have to be more aggressive in our play calling when the situation allows.

Hats off to the defense though for pitching the shutout behind Paul Anderson's two interceptions. Even ESPN's HD had good things to say about the Eagle defense:

There is no question Boston College has one of the best defenses in the country, and Notre Dame realized that tonight. Odds are one of the ACC teams remaining on the Eagles' schedule will find out, too.

Brian: Here is the fallout from the Irish's shutout. Charlie Weis says he's going to play a more active role in the offensive playcalling. Will this help or hurt the Irish?

Jeff: The Irish are still not a great team. They are improved from last year but after a 3-9 season, the only way to go is up. It will be interesting to see is ND can beat Navy and finish 7-5 or if they'll finish 6-6 and what bowl they'll end up at. Is it possible they'll go to the Gator Bowl with that terrible record?

Brian: The Irish will get to 6-6, maybe 7-5 if they can beat Navy. If they get to 7-5, they will definitely play in the Gator Bowl. If they are 6-6, it will be interesting to see where the Irish land in December. If they play in a Gator Bowl or equivalent bowl at 6-6 (having not beat any team with a winning record), I will lose the little faith I've had in the bowl selection process.

Jeff: The Big East bowl choices are horrible though this year. I feel bad for bowl selection people who are invloved with Big East and Notre Dame. They have a tough decision this year.

Brian: ESPN College GameDay announced it's hosting its popular pregame college football show from Tallahassee this week. However, they aren't going to the BC at Florida State game but instead Hampton at Florida A&M. Look at a map of Tallahassee! The two campuses are right across the street from one another. What gives?

Jeff: This is a monumental slap in the face. Clearly BC is dragging down ranked FSU here. But hey, we are the 8:00 game on ABC so that is some serious coverage for BC and a win should really help recruiting.

Brian: There will probably be a lot of Florida State fans at Gameday since it is literally across the street from Doak Campbell Stadium.

Jeff: With the win, the Eagles became bowl eligible for the 10th straight year. ESPN's Mark Schlabach now has the Eagles projected to play Boise State on the blue turf of Idaho . Never going to happen, right?

Brian: No, the Eagles will not go back to Boise in the conference's last year on the blue turf, especially not against Boise State. Apparently Schlabach doesn't know the history of Eagles-Broncos in the Humanitarian Bowl.

Jeff: Give me an updated ACC Championship game prediction after this past week's ACC action.

Brian: I honestly have no idea who is going to be in the ACC Championship Game this week. I could see a realistic scenario where Florida State beats BC, Maryland beats Florida State, BC beats Wake ... and Wake Forest goes onto the ACC title game. Wake has the easiest road, having to only beat NC State and BC. Even though I'm not sold on the Deacons, my head says Wake Forest vs. Virginia Tech, but my heart says BC finds a way to run the table and face Virginia Tech again in the title game.

No one is talking about BC right now and lots of people are still talking about Maryland, but after it's all said and done, I see Maryland dropping their last 3 games, going 6-6 (3-5 ACC) and playing Navy in the Eagle Bank Bowl. The bowl sells out in its first year and everybody wins. Win, win win.