Share All sharing options for: Headlines: Clemson Grounds The Eagles 27-21

Brian: Forgetting the game and the result for a moment, Jeff, you were up in Chestnut Hill for the first time since last year's home opener against Wake Forest. Tell us a bit about your experience. What did you like/dislike about Saturday's game day atmosphere?

Jeff: Well as you point out this was my first home game since last year (I have attended 3 away game, the bowl game and the ACC Championship Game) so this was the first time I was there for the extended tailgating hours and of course it was a huge improvement. But even with the extended hours, you set up your food and you grill, cook some food, enjoy the experience briefly and then start packing up.

In the stadium, there were a lot of empty seats. The away sections were packed, the Superfan section eventually filled up but the rest of the stadium was maybe 80%. This had one advantage for me though as I was able to stand a good part of the first half and the entire second half without being told to sit down even once. The people behind me could simply slide down a little bit and then I didn't bother them. 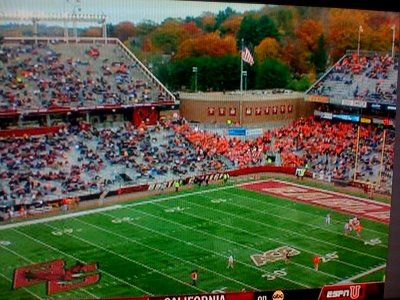 Brian: Well, this is what I saw. I realize this is before the game, but really?! The announcers said there were 4,000 Clemson fans at the game and it looked like they outnumbered BC fans in the stadium pregame 4 to 1. Sad.


On to the disappointing loss for the Eagles. I had the opportunity to watch this game again and I was more disappointed the second time I watched this, particularly with the offense and the special teams performance. Let's start with the offense. While many will be quick to point the finger in the direction of our fifth-year freshman quarterback Crane, I counted at least 5 drops from our wide receivers and backs. What's up with that?

Jeff: Chris Crane is the easy target based on the season he has had so far but you are right, it did not seem like the offenses inability to get first downs was solely his fault. We just waited for someone to make a play and no one on the offensive side of the ball ever did. The defense set up two touchdowns and the special teams scored the third. We never expected a quarterback to carry the team this year and it's about time some other player stepped up and either made a catch that they shouldn't be expected to or break a play for big yardage.

Brian: The drops were disappointing, especially the ones to Purvis. We only threw to Purvis three times and he straight up dropped two of them. You're right though. No one stepped up and made a huge play. The Eagles were conservative in their play-calling (if I saw one more delayed draw to Haden or Harris go for no gain or 2-3 yards I was going to throw something at my TV) and tried to dink-and-dunk the Tigers. Their longest play was for 23 yards - the catch to Robinson, and even on that play, it was only a 6-7 yard reception with a majority of the yardage coming after the catch. Our longest runs were an 18 yard scramble by Crane when the play broke up and a 15 yard run by Haden that he ended up putting on the turf (fortunately, BC recovered).

When the Eagles did try to go for the big play, none of the receivers got open, Crane over or under threw his receivers or Crane was forced to either scramble to make something happen with his feet or throw the ball away. Even our one touchdown pass was the result of Crane making things happen with his feet and alluding pressure. And then in the first quarter the one trick play we tried on offense which could have gone for a lot of yards, Crane looked silly missing the block of the defender that would have sprung Jeff Smith.

Next up: special teams. While I'm not one to jump off the "Crane as starter" bandwagon just yet, I am simply growing tired of the BC kicking situation. Aponavicius missed absolute chip shots from 21 yards in the first quarter and 37 yards in the second quarter. And then late in the fourth quarter, with the game on the line, Jags and the coaching staff passed up an opportunity to tie the game forgoing a 27 yard field goal to tie the game. Granted on that 4th and 4 play Crane was able to allude pressure and hit Brandon Robinson in the end zone for a 15 yard touchdown pass, but the decision to not go for 3 points to tie the game tells me that Jags has absolutely no faith in Aponavicius to tie up the game in that situation. Add to this Quigley's 49 yard squib kick that Spiller was able to return 64 yards to the BC 15 for the winning score, and I would say the kicking situation is a major issue for the Eagles. Of our 3 losses this year, if BC had any faith in our kicking game, we probably are in a position to win both the Georgia Tech and Clemson games. Aponavicius was a good story (one that Texas Tech's Matt Williams seems to have one-upped), but it's high time BC finally get a BCS conference calibre kicker. What, if anything, can be done to fix the Eagles kicking woes?

Jeff: Shit Brian, we can't recruit a kicker midseason so what do you want the staff to do? In retrospect, I think going for it on 4th and 4 was the right call even though I was screaming in the stands at the time. Jags needs to try to score only touchdowns the rest of the way. Do not attempt any more field goals. If we had a decent kicker we would've won the Georgia Tech game and possibly the Clemson game. If BC did not attempt a single field goal this year, we would either still be 5-3, 6-2 or 7-1. We need to go for it on 4th and anything once we cross the opponent's 45 yard line.

Brian: Well as Jags described about the Crane situation, you are right: there aren't any waivers in college football. I disagree though. You have to show your kicker some confidence in late game situations by putting him on the field. If your kicker can't hit a 27 yard field goal to tie the game in the fourth quarter, you need to either make a change in the starting lineup or hold an open tryout for the position. As we saw last year, you can have a Matt Ryan and a nasty defense and still come up short due to kicking issues (see: ACC Championship Game).