Share All sharing options for: Headlines: BC 2, FSU Blackout 0 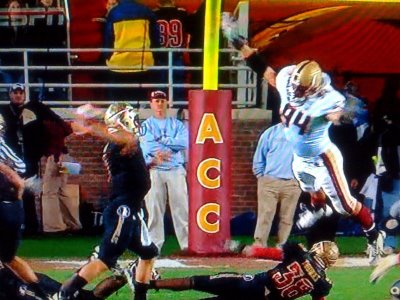 Brian: We've both now watched this game back a second time. Let's start with how the Eagles were able to beat the Seminoles Saturday night 27-17.

Jeff: The Eagles controlled the line of scrimmage first and foremost. In passing situations, FSU blitzed with what looked at times like 15 guys, but somehow the line and the backs were able to give Chris Crane just enough time to get off a pass. Then on defense, Brace and Raji did a great job of clogging up the middle. I wanna say that when Brace got hurt, FSU had less than 10 yards rushing to that point. Finally, we didn't lose the turnover battle. We came up with three interceptions to equal the three times Chris Crane coughed it up although the interception wasn't really his fault.

Jeff: I want to say Steve Aponavicius. He did what was asked of him. He hit the extra pointss and was 2-2 on his short field goals. I was extremely nervous when he stepped onto the field as I'm sure most Eagle fans were but he did not disappoint.

Brian: A lot of individuals get game balls for me.

Chris Crane, Montel Harris and Josh Haden had outstanding games. Props to Steve Logan for mixing up the playcalling and staying committed to the ground game. The call to rush with Haden on a 3rd and 12 in the first quarter was perfectly timed. Harris started off the game strong ripping off a long run on the first drive. There were a few play-action and misdirection plays that faked out even the cameramen. Even though a few of the plays didn't really get going, I liked the end-around and reverse calls getting Rich Gunnell more involved on the offensive side of the ball. The aggressive play-calling was nothing short of outstanding. The on-side kick recovered in the first quarter set the tone for the rest of the game.

The difference for me, though, was the dominance of the Eagles defensive line against the Seminole offensive line. Ron Brace and B.J. Raji blew up rushing play after rushing play in the Seminoles backfield. The Florida State offense was really only successful when they called for screens, outs and end-arounds. When they tried to pound the ball inside, the Eagles defense pushed around the Seminole offensive line, and FSU's rushing game was virtually non-existent for most of the game. The only time FSU got a lot of yardage on the ground was when Ponder moved the ball with his feet when coverage broke down. When your leading rusher was your punter/placekicker on the third quarter fake punt, I'd say the BC defense got the job down against the FSU run. FSU went into the game as the second ranked rushing attack in the ACC. Mike McLaughin and Mark Herzlich were all over the field all night. The Bowman pick-6 was set up by Herzlich blitzing and going airborne on a Seminole 2nd and 13 deep in BC territory. Jeff, what did you like about BC's ball-hawking secondary's effort?

Jeff: BC's defense absolutely got the job done and it really was the fake punt and some great field position that allowed Florida State to put as many points on the board as they did. The secondary was great. Everyone knows that if you are going to beat BC, you're going to have to be able to throw the ball against them. But when the team comes up with three INTs against a favored Seminoles team in their house, it'll be interesting to see what Wake Forest and Maryland come up with for an offensive game plan in the next two games.

Brian: Also, one of my keys to the game was answered: converting on 3rd down. The Eagles converted 9 of 16 3rd downs, including several third and longs. On the other side of the ball, the BC defense kept the Seminoles in check, allowing only 2 conversions out of 10 third down tries.

In your opinion, did the suspension of 5 Florida State wide receivers have an impact on the final result of this game?

Jeff: If you mean, the final score, yes. Who won or lost, no. I can't say that the FSU recievers suspensions didn't change a few plays or the final score, but on Saturday, the Eagles proved that Florida State lacked more than just a 3rd and 4th string receiver in order to be able to beat Boston College.

Brian: The Eagles are now in a strange position, having to win its last two games to make it back to the ACC Championship Game in Tampa. I say strange position because with 2 ACC games to go, while the Eagles control their own destiny to win the Atlantic Division, there's no situation where the Eagles can lose to either Wake Forest or Maryland and still win the division. Maryland and Florida State can still win the division with a loss and some help. The Eagles just have to get it done and it starts this weekend against Wake Forest. I'm really hoping there isn't an emotional letdown as the team has had to get up to play Notre Dame and Florida State in back-to-back weeks. Jeff, do you expect any letdown?

Jeff: No. How could a game at Wake Forest allow for an emotional letdown at this point? Wake Forest was picked by many in the preseason to win the Atlantic so the Eagles have undoubtedly had their eyes on this Saturday's game ever since. Wake has spent most of the year in first in the division since their victory over Florida State in September, only to fall from that spot this past weekend with their loss to NC State.

So as we have been saying for a long time, we can easily forget the painful Clemson and Georgia Tech losses from earlier this season if we can just win our final two games where the Eagles will be favored in both. Exciting times. Who we might be playing in Tampa is anyone's guess with Miami, North Carolina, Virginia and Virginia Tech all having legitimate chances.

Tonight on ESPNU we will get our first chance to see the Eagles 2008-09 basketball squad with Tyrese Rice. I'm excited for basketball season to get heated up because our team shows a lot more promise than it did last year. I hope to see a lot of Superfan shirts in the crowd rather than Superfan colored empty chairs sitting behind both the baskets at Conte tonight.


Quickly ... with the loss, Bobby Bowden is now 31-2 on Homecoming weekend ... the Seminoles are 0-2 against the Eagles when wearing their black uniforms (Nike might want to rethink that arrangement) ... Jags wanted to crash the FSU blackout party ... FSU Darius McClure may have torn his ACL after celebrating his fourth quarter interception ... the men's soccer team was ousted from the ACC tournament, falling to Maryland 1-0 (if it's any consolation, Maryland took the tournament defeating Virginia on Sunday) ... the men's hockey team won a wild game 8-5 against New Hampshire, but only skated to a 5-5 tie against Merrimack on Friday night ... HD: things are bound to clear up soon [in the Atlantic Division race] (you think?) ... men's basketball won the season opener without Rice 80-65.