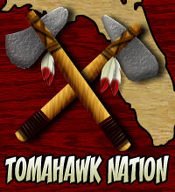 Today we welcome FSUncensored from the Florida State Seminoles blog Tomahawk Nation for five good minutes. In exchange, Jeff and I discuss BC football over on their blog.


Brian: Florida State is 7-2 but was saved by the bell against Miami and beat Virginia Tech by knocking Glennon and Taylor out of the game. Meanwhile they nearly beat Georgia Tech. Is FSU closer to being 5-4 or 8-1?

TN: 8-1. FSU dominated Miami up and down the field (28-17 1D Advantage, 40 minutes possession time, 11-17 on 3rd downs against 2-15) and Miami was extremely lucky to be within 2 points. On the other hand, Georgia Tech dominated our defense, scoring 31 points and averaging over 8 yards per play until their QB went out. FSU deserved to lose to GT as they were badly outplayed. As for VT, I could argue that knocking out Taylor was a bad thing, as the FSU defense was unprepared for Glennon. The offense hit some deep balls, however, and eventually put up 30 on Va Tech. FSU deserved to win that contest, 1st string QB or water boy. That leaves Wake. Due to the highly publicized suspensions, FSU was without 5 starters and had struggled mightily, losing 3-12. With a full compliment of starters, however, FSU is averaging 33 points in conference play. It seems to me that the Wake Forest game was an outlier and that FSU should be 8-1. With no lucky wins and 1 special circumstance loss (suspensions, which we brought upon ourselves), I think 8-1 is realistic. Now, if you had asked me 9-0 or 8-1, I would answer 8-1.


Jeff: In the brief recent history between these two teams, the road team has won every time. How worried are you this streak continues?

TN: I am worried that the streak continues, but I don't buy into the idea that the road team has some sort of advantage. I worry that the team will be distracted by their black uniforms, by off-field shenanigans, and that they might look past BC.


Brian: Are FSU fans thinking about booking hotel rooms in Tampa yet now that Wake Forest looks very capable of losing one or both of their final two games?

TN: I actually went on record the other day with a prediction that Wake would lose BOTH remaining conference games. The ACC does not want to see Wake in Tampa and have another embarrassing turnout. If the 'Noles take care of their own business, and improved NC State team or a disciplined BC team can take down Wake, all that pre-season Priceline work will pay off.


Jeff: Is this game a big deal down in Tallahassee, especially considering College Gameday is going to the other football football game in Tallahassee Saturday?

TN: I don't think the Gameday aspect matters much (the schools aren't close enough geographically). I do think people are forgetting about the actual game and are instead focusing on homecoming and the all-black uniforms. FSU fans currently view Wake, VT, Clemson, and Obviously UF as better home games. I hope the Noles take BC seriously. Still, every home game is a big deal in Tallahassee.


Brian: It wasn't too long ago that Florida State was the new kid on the block in the ACC when they became the 9th team to join the conference in 1991. Knowing how it feels to be the new kids in the conference, how is Boston College perceived by Seminole fans? Do FSU fans see us as merely northern interlopers, or do they embrace the addition of the ACC's twelfth team?

TN: Despite being a divisional opponent and having played 3 consecutive exciting games, I really don't get the feeling that FSU fans think about BC very much at all. The general consensus seems to be "Northern school. Strong. Well Coaches. Not Flashy. Not Quick." If you look at the teams we really care about right now, they are either traditional rivals or teams that have crawled under our skin (Wake Forest). BC doesn't fit either category and the distance between our 2 schools certainly doesn't help matters. As a side note, it seems like some players are at BC forever; maybe that is also distance related. I know that many fans enjoy the Boston trip, and personally I have a hard time conjuring up the hate for Boston College that I have for other schools.


Jeff: Admit it. You have a little soft spot in your heart for BC football given they paved the way for Florida State's first football national championship in 1993.

TN: Absolutely. I watched the kick again recently, and it was a pure miracle that he hit that long of a knuckleball. Nole fans are forever grateful to the Eagles for that kick.


Brian: Last one, make a prediction for this game.

TN: I hate to beg out of this one, but I must here. Yesterday, several FSU players were involved in a brawl in the student union. There are various accounts, the most credible of which seems to indicate that a receiver was sucker-punched. If this was self defense against the African American Fraternity who attacked the player, I seriously doubt the players will be punished. If that is not the story, however, there could be immediate fallout from this. I should know more tomorrow, and promise to chime in by early Friday at the latest.

Brian: Thanks for joining us!


For more on the Florida State Seminoles, go check out Tomahawk Nation.