BC-Notre Dame And The Big Finish

Share All sharing options for: BC-Notre Dame And The Big Finish 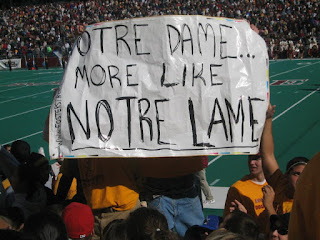 Jeff: Brian, it's Notre Dame game weekend and the football game is hardly the only big event on campus. Arguably the biggest event is tonight's hockey game which happens to be a rematch of last year's national championship game. You'll be there and I'll be watching on ESPN Classic. Can I expect and easy Eagles victory just as it was in the Frozen Four?

Brian: I am still looking for a ticket so if anyone is looking to part ways with their tickets, leave us a comment in the comment section.

As far as the hockey game, Notre Dame might very well be improved from last year's championship game squad. They return 18 lettermen and their leading scorer the last three seasons in Erik Condra. Condra did not play in last year's title game, but then again, neither did BC's senior forward Brock Bradford (6 goals, 3 assists in '08). Both teams are coming off weekend sweeps. BC took care of Merrimack while Notre Dame beat Northern Michigan. I actually expect a high-scoring game tonight with the Eagles edging the Irish 5-3 behind scoring from our talented freshmen.

Onto the big football game on campus tomorrow night under the lights of Alumni Stadium. The Irish come to town this weekend as the Eagles put their 19 game out of conference winning streak on the line. While this game doesn't mean anything for the ACC Atlantic Division race, a win might be a confidence builder for the home ACC stretch. It feels like an eternity since the Eagles last won a football game. Jeff, do you consider this to be a must-win situation?

Jeff: Yes, I think this is a must win. If they don't win tomorrow, there is no way they bounce back and win at Florida State.

Steve Aponavicius was quoted this week saying that if he misses just one more field goal he deserves to be benched. Agree with that? Or is he not even going to get another chance at a field goal this season?

Brian: Well, Jags has come out this week and said he's holding a competition for the Eagles PK duties. So I'm not sure whether or not Aponavicius is going to see the field again this year. My question is about the open competition though. Is this a good idea, or does the competition instill a lack of confidence in both of our kickers?

Jeff: Neither kicker has any confidence right now anyway. Steve Aponavicius has had a terrible season, and everyone else hasn't even been given a chance so they must not have any confidence. So why not hold a tryout? As a player who wants to compete, you want to have a chance to compete for your position on the team so I doubt either of the kickers has a problem with it.

Brian: Give me three keys to the game.

Brian: Last year, Logan and the BC offense were able to light up then-Georgia Tech defensive coordinator Jon Tenuta's blitz-happy defense behind the arm of Matt Ryan. Ryan threw for 435 yards and Callendar/Whitworth added another 100+ yards on the ground. A year later, Tenuta is now serving as defensive coordinator for the Irish. Do you still like the Logan vs. Tenuta matchup tomorrow night?

Jeff: No. We don't have Matt Ryan anymore, but Notre Dame's defense is still far from a national power so I expect Boston College to be able to amass well over 100 on the ground and move the ball a little through the air. Will the weather play a factor in this game? And if so, who gains an edge?

Brian: If it does rain (Blacksburg 2007 style?), advantage Eagles. The Irish pass a lot more than they run, and it will be hard to establish a passing attack in the rain.

Brian: This week, the Nebraska blog Double Extra Point takes a look at ACC chicks. Within the ACC, who has better looking girls? The Atlantic Division or the Coastal Division?

Jeff: Florida State and Clemson have to be as good as any in the ACC and I must say that BC cheerleaders are not too bad either.


Jeff: HD is picking against the Eagles, SHOCKER! She has been wrong about us more than she's been right whether picking for or against us. Do her BC woes continue?

Brian: My back of the envelope math tells me that she's been wrong about the Eagles more than any other ACC team this season. As you'll see below, I believe her woes do continue.


Brian: On Wednesday night, I got last minute, cheap tickets to go see the Bobcats vs. Knicks at MSG. Jared Dudley started for the Bobcats. He played well, especially in the first quarter, and finished the game with 13 points and 3 steals. Unfortunately, the Bobcats came up short 101-98.

Jeff: Yes. I do miss the Big East tournament at the Garden. MSG is much better than the rotating ACC tournament. Also, right now it's like if you're not playing Duke or North Carolina, who cares? That will change when Wake Forest gets good again or Maryland but the Big East was deeper in a way. Also, if Virginia Tech and Miami hadn't left I'd just as soon still be in the Big East. Clemson and Florida State are great but the rest of ACC football I could do without.


Jeff: Maryland lost to VT last night so BC once again controls its own ACC Atlantic Division destiny. Are you booking a flight to Tampa?

Brian: Umm ... no. Not yet anyhow. When we beat Florida State, we'll talk.


Brian: Last one, way back in August you predicted an 11 point victory for the Eagles, 29-18. And since you jinxed us last week by not making a prediction to avoid any domestic static, let's get back on track here. I'd like an explanation of how the Irish are going to score 18 points in the above scenario and an updated prediction knowing what you know now about these two teams.

Jeff: BC scores 2 touchdowns and on the second misses the extra point. On their next two touchdowns, they go for 2 and convert both. Meanwhile the Irish kick 4 field goals and then go for 2 after scoring a touchdown and fail. I am sticking with my 29-18 BC victory prediction!

Brian: That might be the strangest game prediction I've ever heard. Here's to hoping you are right.

Brian: Last week, I went 3-2 (and warned Jeff about Texas Tech and Florida) while Jeff went 2-3. I'm now 4 games back with 4 weeks to play. I might be throwing away a pick here on BC (since games with Notre Dame are always close), but what the heck.