Road Trip Report: Back from Raleigh

Share All sharing options for: Road Trip Report: Back from Raleigh 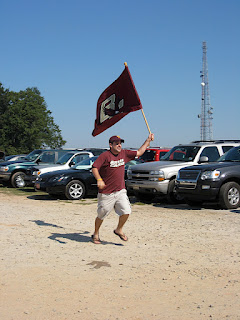 Jeff and I are back from Raleigh. We'll have more on the Eagles 38-31 victory later today and some more thoughts about the road trip later tonight.

We were lucky enough to also make the trip to Chapel Hill for the Saturday night game between North Carolina and Connecticut. We stayed for about half of the game, and left when two banks of lights on one side of the stadium went out, delaying the game for 22 minutes. After the lights went on, the Tar Heels put the game out of reach, handing the Huskies their first loss of the year.