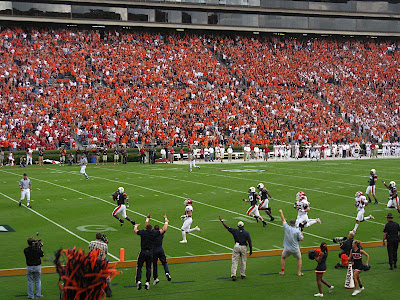 Tristan Davis runs a kickoff back 97 yards for a score

Here are some of my thoughts on my ESS EEE CEE experience at the Auburn vs. Arkansas game this past Saturday and how it stacks up against the Boston College experience.

My first experience at Auburn when getting to the stadium was stepping in a mound of fire ants. And yep, I had sandals on. Welcome to the south. Grr.

When we walked into one of the fraternity houses to meet a few kids, I noticed they had a pig roast on the table while watching the Red River Rivalry between Oklahoma and Texas. This feast was fitting, of course, because Auburn was playing the Hogs of Arkansas. I like the idea of your tailgating feast relating to the team you're playing. Possible suggestions ... a bowl of Lucky Charms (Notre Dame), Frosted Flakes (Clemson), Hurricanes, the mixed drink (Miami), Snapper Soup (Maryland) ... Three Musketeers bars (Virginia)?

This weekend I will honor this tradition by eating a turkey sandwich at the tailgate. Watch out, Hokies!

Jordan-Hare Stadium is fairly impressive as far as stadiums I've watched a college football game in. Seating 87,000+ it's one of the ten largest on-campus stadiums in the country. Strangely, there are four ramps in each corner of the stadium where a lot of fans stand and watch most of the game. Must get a better view than their actual seats.

The one thing I noticed was that the volume wasn't very high (this might have been because I was sitting in the lower corner of the endzone and on the opposite side of the student section). The game had a strange crowd intensity to it, which might have been attributed to Auburn's struggles the previous week at Vanderbilt. In terms of crowd noise, it wasn't nearly as loud as Death Valley at Clemson, Virginia Tech's Lane Stadium, or Beaver Stadium in Happy Valley, but it did get appreciably loud at times.

There were plenty of storylines going into this game ...
Thankfully I got to watch a really tightly contested battle. Bad news? The home team didn't pull off the victory and Auburn (yet again!) didn't cover for my Pick 5 pick. (That's it, I'm officially breaking up with the Tigers or going against them the rest of the season).

Even when Auburn jumped out to a 20-10 lead, you knew this game was going down to the wire. Arkansas ran all over the Auburn defense, and Auburn went drive after drive going 3 and out. If it wasn't for a decent defensive performance and a special teams touchdown, this game wouldn't have been close.

In the end, I think the Auburn defense gave up on the offense. After 3 quarters of play, the Tigers had a measly 100 yards of total offense, and had scored on a 97 yard kickoff return, a scoring drive started by a big interception return, and a fumble on the opening kickoff to start the second half.

Even late in the fourth quarter, with the game on the line, Auburn was stuffed on four straight plays with goal to go. And the boos started to come from all parts of the stadium.

The other thing about the game I found curious - which I also noticed in the LSU vs. Auburn game earlier this year - is the way Auburn calls in their offensive plays from the sidelines. Instead of huddling up and calling the play, the Auburn offensive gets to the line, gets into their stance, then in unison the entire offense all stand up out of their stance and watch something like 15 different coaches call in various plays (I'm told only one coach has the actual play). The players look eerily like a family of prairie dogs coming out of their burrows. I guess I've been spoiled by Matt Ryan calling all the plays himself. It's an odd way to make the play calls and seems to disrupt the flow of the offense. Not to mention half of the crowd gets really fidgety when this happens. This is something new that was implemented with Tony Franklin's spread offense, and you can tell a good percentage of the fans get frustrated by this.

Here are some things I picked up from Auburn that I would like to see implemented at Boston College. 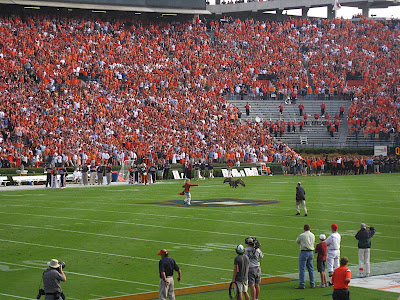 The War Eagle. OK, maybe Auburn has the advantage of having a college of veterinary science. But watching the war eagle fly around the stadium as part of the pregame festivities is actually pretty cool. (It never flies the same way twice!) After a couple of circles around the stadium, the Eagle comes crashing down into the middle of the field and the stadium erupts. It's one of the better pregame festivities that I've seen in all of college football (a close second to Clemson's running down the hill and the whole Howard's Rock routine).

Now I'm certainly not calling for the return of the screaming Eagle over the P.A. system every time the Eagles make a first down (super annoying!), but the return of a live Eagle on the sidelines might be cool for BC. BC hasn't had a live Eagle mascot since 1966 when the eagle Margo died.

The Crowd and the Fans. Almost everyone wears orange to the games, which provides a pretty nice contrast to the blue jerseys and white pants that the team wears. Auburn never wears orange jerseys at home because they lost a few of the times they played in orange tops. The contrasting colors of the team and the fans look great on the replays on the Jumbotron (see below) and I'm assuming on television. I was informed the one caveat to the fans wearing orange is when Auburn plays Tennessee, and they switch it up and all wear navy to the game.

In my opinion, we need to implement a similar scheme immediately! The Superfan section always looks great on television and in overhead shots of Alumni Stadium. Let's extend the sea of gold to the rest of the stadium. Athletic department - please market more Superfan gold t-shirts to the rest of the fans so we can implement gold rushes for every game (not Gold Rush gold, it's just too washed out and doesn't match the Superfan shirt color). When Georgia Tech or Notre Dame come to Alumni, we'll switch it up to a maroon out. Sound good?

Also, of note, I stood up several times to cheer for the home team and none of the "Down In Front" crowd was evident. A welcome change from our seats at Alumni. 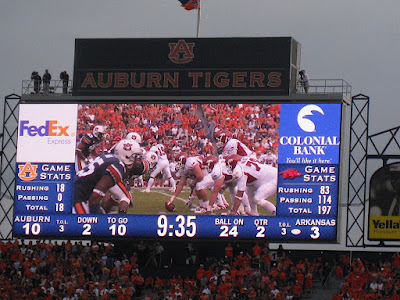 The Jumbotron. Seriously, this thing is huge. An enormous, 74 foot x 30 foot high def LED video display sits in the south endzone. I looked this up - the only other NCAA school that has one of these is Texas, and in Austin it's called the Godzillatron. We need one as soon as possible. Gene, please get on this. The video display shows game stats (note that in the photo there was 9:35 left in the second quarter and Auburn had amassed ... 18 yards of total offense!), replays of every play as well as several ...

Pump Up Videos. The crowd goes nuts before the game when 2-3 different video montages are played of football highlights, cheerleaders, the band and the crowd. Pretty intimidating. We could easily put together a few of these videos set to the Dropkick Murphy's Shipping Up To Boston to be shown on our new Eagletron. 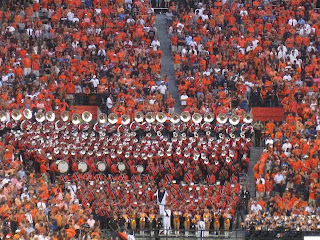 The Band. Twice to three times the size of BC's band (look at the size of the brass section!). At the end of every song, however, they pander to ESPN finishing the song with the SportsCenter jingle ("Da-da-da ... da-da-da"). Kinda cheesy. And they played Sweet Caroline at some point in the second quarter. Back off, that's ours ...

The Playing Surface and the Hedges. Classy. OK, I know we are stuck with FieldTurf, but the grass and the hedges that line the playing field make for a very classic looking playing surface. Maybe we should trendset for these northern stadiums that have FieldTurf and create FieldTurf hedges? 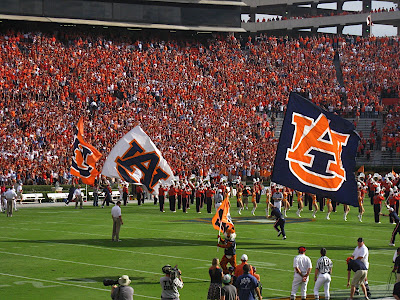 Big Ass Flags. Now I understand the Eagles have flags, but we don’t have Auburn-sized flags. These flags are obnoxiously waved in the pregame festivities as well as any time the Tigers score. Very cool. If the male cheerleaders at BC can run with the Eagles' flags only using one hand to hold them, they are too small. Let's implement these huge flags with the BC logo on them and have the team run out behind the flag holders.

The Mascot. Sorry Tigers, Baldwin is cooler than Aubie. Besides, even though Auburn's official nickname is the Tigers, they affectionately embrace the War Eagle as their fight song and live mascot. Because everyone knows Eagles are better than Tigers (right, Clemson?). 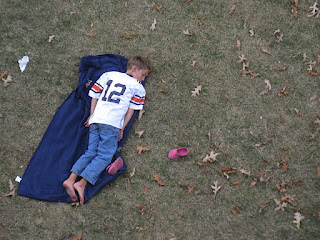 Photo taken from the top of the parking garage right next to the stadium.

(Some of) The Conversation. I got into a heated (but friendly) argument on Friday night while having a few drinks with a kid who was disgusted that I could be a fan of an ACC football team. The argument got pretty heated when he said that Matt Ryan wouldn't have been any good if he played an SEC schedule last year. The conversation went something like this ...

For Matt Ryan to put up over 300 yards and lead the Falcons to a last second win over the Bears on Sunday left me feeling good about myself on Monday.

Seriously though? Eagles fans know full well that Matt Ryan could have more than held his own in the SEC ...


College football is awesome wherever you go. If you can experience college football in other parts of the country, I highly recommend it (but be sure to go on the off week).