Mail Time: Preparations For The Hokies

Share All sharing options for: Mail Time: Preparations For The Hokies

We open up the "mail" bag again and answer questions about fan preparations for this Saturday night's marquee matchup between #17 Virginia Tech and Boston College. 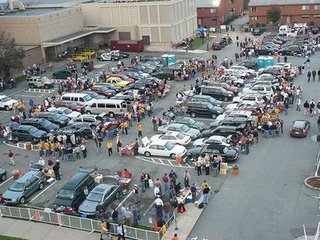 I am a freshman so this will be my first night game at BC. I hear people start tailgating before noon for the 8:00pm game. Do people really do that? What time should I start? - Matt (BC '12)

Brian: You are certainly in for a treat. The only Boston College campus atmosphere better than a Saturday night home football game against a ranked conference opponent I can think of is a Thursday night football game, any game against Notre Dame or Marathon Monday. All other experiences pale in comparison. People do start tailgating before noon. The key here is to pace your drink...er...tailgating. It's a marathon, not a sprint. You should definitely take the day to tailgate, relax and watch the earlier college football games on tv. Start whenever you like, but pace yourself so that you actually get to the game on time and, more importantly, remember the game.

I am a single mother of a BC senior. I have season tickets and want to enjoy all the aspects of the game on Saturday. Is it ok to impose on my daughter and her roommates who live in the Mods and ask if I can stay with them Saturday night? - Susan, Hartford, CT

Jeff: Susan, I like how you are wanting to get the full experience and spend some quality time with your daughter and her friends, but unfortunately I am going to have to say DO NOT do this. Tailgating with them is great and even sticking around a little while after the game is fine. Playing drinking games with them is also great, but when midnight rolls around or so you need to be getting into a cab and heading to your hotel. You would be putting your daughter in an awkward situation which she might not even mind much, but at the very least her roommates would. Or worse yet her roommates might behave no differently than if you were not there and you would find out exactly how your daughter behaves on typical Saturday nights in college. You are just better off not knowing what actually goes on in her Mod late night on the weekends. Trust me.

Is it OK to storm the field after we beat the Hokies Saturday? - Dan (BC '10)

Brian: Absolutely not. Let's act like we've been here before (e.g. our 22-3 win over the Hokies in 2006). Last season, when Maryland knocked off the No. 8 Eagles, the Byrd Stadium crowd of 50,000+ stormed the field. Sure the Terrapins had never beaten us at home before this game, but rushing the field against a conference opponent ... legitimizes how much better your team thinks the other team is. And before you start justifying a victory over a Top 25 team as just cause to storm the field on Saturday, I might point out that we beat 3 ranked opponents at home two years ago. Finally, I'd point to the fact that Boston College is actually favored to win this game! If Vegas thinks we are going to win, then let us take a victory in stride and stay in your seats following an Eagles victory.

My girl is a lightweight but I want to tailgate all day and still enjoy the game. I missed the end of the Georgia Tech game because of her and don't want that to happen again. Any advice? - Sam (BC '11)

Jeff: Sam, you need a plan and it needs to be good. This is a big game you do not want to miss any of, especially the end. First, let her start tailgating at whatever time she wants. If you force her to start later than she wants she will probably just drink too much too quickly to try and catch up. Second, mix some of her drinks for her. I am sure she is not getting that tanked on beer alone so make sure you play bartender and mix in some really light drinks once she gets going. Third, plan a trip for food. Head to a place for food around 6:00 or so to an establishment that does not serve beer. If you are on campus just go to lower or if you are off campus go get some pizza. This way you'll both have eaten some decent food and have taken a nice half hour break from drinking. Lastly, if you are sneaking alcohol into Alumni, don't let her know about it, mix your drinks in the bathroom, and have a virgin coke ready for her at all times. Follow the plan and enjoy the game.

Last one, Boston College opened as a 2 point favorite and now they are 3 to 3.5 point favorites for the game on Saturday. Even though you have been terrible at your weekly Pick 5s, I wanted to get your take ... who looks good this weekend? - Jake (BC '09)

Brian: A very tough question, but I do like Boston College to cover this weekend. The Hokies are 5-2 all-time at Alumni Stadium, but their last primetime Saturday night football game in Chestnut Hill was a 22-3 beatdown at the hands of the Eagles in 2006. Noteworthy: that Hokie loss is also the only road loss that Virginia Tech has had since joining the ACC. I expect this game to be competitive until the fourth quarter - Crane will face a defense that looks more like Georgia Tech than it does North Carolina State. In the end, though, I expect the BC defense to have a big game and Crane and the offense will do just enough to win and cover.