Share All sharing options for: Hockey Opener Tonight and the Big Finish 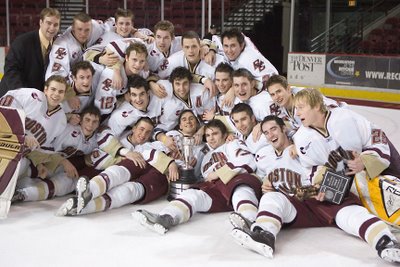 Jeff: No BC football this weekend, but the #1 Eagles raise the banner tonight against #14 Wisconsin at Conte Forum. Here is USCHO's preview of the Badgers. Who are the players to watch for tonight?

The new kids to look on offense are Cam Atkinson, Barry Almeida, Jimmy Hayes, Paul Carey, and Tommy Atkinson. The most highly anticipated performance from a rookie tonight will be the play of Cam Atkinson, a highly-sout after recruit who was selected by the Columbus Blue Jackets in this year's NHL Entry draft.

On defense, the new faces include Tommy Cross, Edwin Shea, and Malcolm Lyles.

Jeff: Make a prediction for tonight's game. Who wins?

Brian: I'll predict that the Eagles don't disappoint the home crowd and come away with a 2-1 victory.

Brian: The offensive line play has been much more consistent than it was a year ago as Jags implemented a new zone-blocking scheme. In this Globe article, however, they kid that Chris Crane hasn't taken the O line out for dinner yet. Shouldn't Crane show his appreciation for the line's performance so far?

Jeff: No no no. Where is Crane going to take them? The little restaurant in Walsh? Is that still there? If he takes them out in Boston the obvious question is 'gee, what donor paid for that meal?'


Jeff: The AJC ponders why Georgia Tech is getting no love in the college football polls but are getting love from the computers. Which one of the reasons from the article is the most compelling to you?

Brian: No win over a ranked team. Most of the mainstream media doesn't think our Eagles are going to be any good this year, and that is the best win for the Jackets this year.


Brian: Last one, we both watched last night's 12-7 Wake Forest victory over Clemson last night. Do these teams play great defense, or does their offense just suck? What are the chances Boston College knocks off both Wake and Clemson next month?

Jeff: Very good. Take away the name Clemson and read bottom ACC team at home and we should have no problem. Our D-line is going to laugh at their O-line. But now that Cullen Harper is being benched for the mobile Willy Korn, I am a little more worried.

One more week for Auburn since I'm headed down there to run their offense this weekend ("Everything I've learned in life I learned from Steve Logan?"). That and Arkansas stinks this year.