Share All sharing options for: Headlines: North Carolina Beat Down 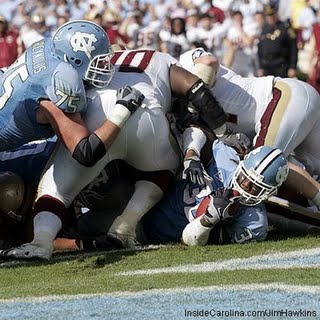 Brian: The Eagles got smacked down 45-24 by the Tar Heels on Saturday to drop to 5-2 (2-2 ACC) on the season. While we knew this would be a tough road game, I think Eagles fans are more surprised at the lopsided result. The easy thing to do after such a one-sided result is to start pointing fingers. So, Jeff, who is to blame for the loss?

Jeff: How do you pinpoint one person to blame for a 21 point loss? However, aren't you somewhat glad we didn't make the trip to witness that pathetic second half display in person?

Brian: Yes, a little glad that we got to Kenan Stadium earlier this year and watched the Tar Heels smack the Connecticut Huskies in the mouth and not the Eagles. As for who to blame, OK I agree with you that one person can’t shoulder the blame for this loss, but I was a little concerned about our play calling on the offensive side of the ball. My question is why weren't we trying to establish the run at the start of the second half? We were only down by a touchdown on our first drive of the second half and called screen pass (complete, 2 yards), pass (complete, 11 yards) and Crane's third consecutive pass attempt was intercepted and returned to the 1 yard line. We did a great job of mixing run and pass on our opening scoring drive, but we got away from that as the first half progressed. And then to start the second half down one score, I don't think you have to go into pass-only mode just yet. Does any of the blame rest with Logan's play calling?

Jeff: I don't know how I feel about this. I mean you picked out a 3 play drive in which we didn't run. Three plays are hardly enough to base anything on. But then again I totally agree with what you are getting at. Chris Crane can single handedly lose games for us and he is the only person on the field that we can say that about. Then again we can't just pound the ball with our young, small, and fragile trio of backs. So Logan might be somewhat to blame, but probably not.

Brian: It wasn’t just the opening drive of the second half. I point to that drive to illustrate that the game wasn’t out of reach yet but we didn’t do much other than throw the ball. On the third drive of the second half, now down 2 scores, we attempted four passes and the fifth pass was intercepted. I realize that the game circumstances at this point might have necessitated constantly passing, but if North Carolina wasn’t honoring the run, they could drop back in coverage and pick off Crane all day.

Jeff: What happened to Dominique Davis seeing some playing time?

Brian: No idea. While I don’t expect him to start, it would be beneficial to get him into the game. He doesn’t even have to throw the ball. They can all be designed runs for all I care. I used to be opposed to the backup quarterback getting snaps during the first drive of the second quarter under Tom O’Brien as it seemed to disrupt the rhythm of the starter. But with Crane yesterday, there was no rhythm and I think you have to start getting Davis some reps for next year.

So where do we go from here? It will be what seems like a short week for the Eagles as they prepare for the Clemson Tigers (3-4, 1-3). The Tigers have one of the most misleading records in all of college football. While they have gone a mere 1-3 in conference, they have lost to Wake Forest, Maryland and Georgia Tech - three of the better ACC teams - and still arguably have the most offensive talent at the skill positions. Can the Eagles regroup and will they have a better performance this Saturday?

Jeff: We're still going the same place we were going. We are trying to win the conference championship game. Boston College, Florida State, Maryland, Virginia and Virginia Tech and the teams who control their own destiny. As long as our name still appears on that list, the only goal is the ACCCG.

I fully expect the Eagles to bounce back Saturday. Home game, 3:30, struggling Clemson, and our strong defensive line should laugh at their O-line.

You be the judge. I mean, it certainly wasn't Dana Bible calibre play calling, but I think we could have done a better job of establishing the run.

Quickly ... In the notes section of this article, DE Jerry Willette injured his left knee and is questionable for Saturday’s Clemson game … Mathias Kiwanuka (5 tackles, 3.0 sacks and a whole bunch of hurries) had a monster game in what seemed like a playoff game in the Giants 21-14 win at Pittsburgh ... Matt Ryan went 23 of 44 for 277 yards with 2 touchdowns and 2 interceptions in his homecoming loss to the Eagles ... Tyrese Rice was selected to the All-ACC Preseason First Team, but the men’s team was picked to finish 11 of 12 this year ... embarrassing losses to Carolina schools know no one sport – the Eagles men’s soccer team was lit up 5-2 by undefeated Wake Forest down in Winston-Salem. The Eagles dropped to 7-5-2 (3-3 ACC).

(Photo via Inside Carolina)