Brian: Let us relive Saturday a little. First of all, what did you think of the tailgating at North Carolina State?

Jeff: To be honest, It was nothing special. I mean tailgating is a million times better than tailgating in Chestnut Hill would be for a visiting fan, since at BC you are screwed if you don't get a lower campus parking pass. Carter-Finley Stadium is relatively isolated and therefore there is plenty of space to park all the NC State donors and general parking. The weather was perfect so we had a GREAT time, but NC State fans that we ran into were unfriendly from the moment we got there. When it got time to walk to the stadium we were heckled the entire way. This is fine and all, but trust me it toed the line of excessive. Also, just to compare it to the two away games we attended together last year (Virginia Tech and Clemson), at both of those games we made friends in the parking lots before the game.

Brian: I agree that the students and fans weren't very welcoming, especially when walking to the game in what was basically a walk of shame for Eagles fans. State faithful on either side were heckling us as we made our way to Carter-Finley. It certainly didn't help that not many Eagles fans made the trip, otherwise there would have been a little more safety in numbers. After the game though we didn't hear much of anything from the line of tailgates as many fans were already in their cars lined up ready to go home.

We, of course, had a great time tailgating and mainly kept to ourselves. Obnoxiously waving around our BC flag, visiting another BC tailgate with a rousing game of Eagles vs. Wolfpack flip cup (BC dominated, of course), a new personal best at Wii bowling (290 ... can anyone top that?), and we got to watch the Florida State vs. Miami game on ABC after the game and tailgate some more. As Jeff mentioned, the tailgating wasn't on par with that of Clemson or Virginia Tech from a year ago, but it was better than the tailgating experience at Maryland.

As previously mentioned, we also got to the Carolina vs. Connecticut game on Saturday night. Jeff, how did you think the Carter-Finley stadium and Kenan Stadium experiences stacked up to the Alumni Stadium experience?

Jeff: I was happy with how many Eagles fans made the trip to NC State since I didn't expect many to go to begin with. Also, tailgating is mainly what you make of it and we had a group of twelve so that was a party in itself. Lastly, it is important to note that we were in a pretty good size parking lot and there was only 1 Port-A-Johns. That was pathetic. 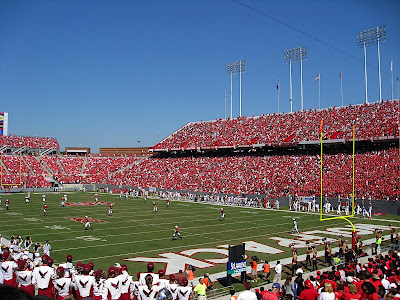 As for both the stadiums, I like Carter-Finley better than Kenan. I have been to Kenan twice now, once for the BC game at noon a few years ago and then again this weekend. You park in parking garages at UNC so tailgating stinks but then the stadium is OK. You probably liked Kenan more but keep in mind that all stadiums have better atmospheres for night games. 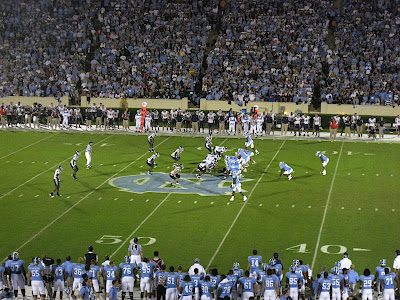 Brian: I did like Kenan Stadium better for a couple of reasons. For one thing, the stadium is right on campus and as Wilbon pointed out on PTI, it really is a beautiful place to watch a game with all the trees, the hedges on the field and the open end zone. I know, I know I was on the side of the stadium that overlooked the rest of campus and the tower and you weren't Jeff, but still. (Jeff was actually close to the UConn fan section ... coincidence?) I didn't get to see NC State's campus at all and the Wolfpack's stadium seems detached from most everything else about the school.

The other thing I liked was the student section in the end zone. They were really spirited (sure, the night game probably had something to do with that) and it will be a tough place for the Eagles to play in three weeks.

Don't get me wrong, Carter-Finley was nice too, sort of a souped up Alumni Stadium. I liked that the lower section of the stadium had red seats that made it look like there were a lot more fans in that section than their actually were. The stadium was a little more closed in and the high walls can produce an intimidating atmosphere. The one downside for Kenan is, as you mention, the tailgating situation. There are plenty of fields and empty space to tailgate at Carter-Finley.

Brian: Chris Crane, I hardly know you. Where did that performance come from?

Jeff: That's Mr. ACC Player of the Week to you. But seriously, I think Crane needs to send thank you notes to everyone on the NC State defense, the offensive line and Steve Logan. BC didn't throw the ball over and over on Saturday because they couldn't run the ball. They threw because it was working so why not stick with it? But the running game worked fine between the 20s as well and BC could've moved the ball either way. BC still has a big problem putting the ball in the end zone. Crane had to run for three of our touchdowns. The two passing touchdowns came from the 41 and the 12. When BC gets into the red zone against Virginia Tech, it is not going to be as easy and those 4 red zone touchdowns are going to be some field goals unless the Eagles accomplish a lot during the bye week.

I don't want to belittle Chris Crane's accomplishment, but I just want to calm down the hype. Chris Crane had a great, great day, but now that I've watched the game a second time I'm not as excited as I was. There were still several mistakes and a lot of passes were completed because NC States defense is not the greatest.

Jeff: The special teams were not terrible as a whole. The fake punt was great and Aponavicious didn't miss any kicks which is amazing! The kickoffs were terrible though. Eagle in Atlanta reported that Billy Bennett's kicking was fine but the coverage was terrible. I disagree. The coverage could have been a little better, but Billy Bennett is not getting enough hang time on his kicks. His kicks need either to go deep into the end zone or have a little air under them so the coverage team has a chance to get there, just like punting.

Brian: While I give credit to the coaching staff and the unit for pulling off a great fake punt, overall I won’t be singing the special teams praises after this effort. This game was a good special teams effort away from not being close at all. NC State didn’t start any drive from further back from their own 27 yard line. With the kickoff return for a touchdown and the kick return that set up the 1 play, passing touchdown scoring drive really put this game in jeopardy.

Jeff: This game was close to being a blowout victory for the Eagles. Real close. But then it was also close to a loss. We are now three days removed from this game and I don't know if this game was a sign that BC is going to Tampa or if BC is going to lose several conference games since most of the conference is better than North Carolina State. The three turnovers were tough and BC did not punt after their first possession so I am leaning towards the Eagles heading to Tampa. But Saturday shows us that we could lose ANY conference game at any time.


Up Next: Virginia Tech

Jeff: As reported yesterday, the Virginia Tech game time has been set for 8:00pm. This is great news. Nothing better than a ranked team coming to Alumni Stadium for a night game, especially after last year’s regular season thriller. But can you believe there are still plenty of tickets available on bceagles.com? Not to mention all the tickets on Stubhub, eBay, etc.

Brian: That is a little shocking, but I'm guessing by gameday it will be a sellout. We are a 4th quarter away from being 5-0 and probably ranked in the Top 20 in the country. If that Georgia Tech game goes the other way, it might be a completely different story.