No BC birthdays of note today, so we wish a Happy Birthday to Kelly Ripa. While Kelly didn't attend BC, she did attend Brian's high school and is probably the most famous of his high school's alumni.


Happy Anniversary to the BC Eagles football team. On this date four years ago, you knocked off I-AA Massachusetts in Chestnut Hill, MA. While the passing game wasn't pretty (Paul Peterson went 16 of 30, 239 yards, 1 touchdown, 3 interceptions), freshman running back A.J. Brooks had a career day rushing for 160 yards and two scores. The 160 yards rushing by a freshman is a BC record. Could this record be broken this year?


Happy Trails to the Clemson flag hanging from Jeff and his fiance Kristi's house. Thanks to a little side bet Kristi and Jeff had, since Clemson lost last weekend, the BC flag will be proudly flying from the side of the house until at least the Boston College-Clemson basketball game! (Ed. note: As it should be ...) 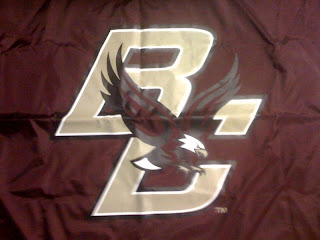 Speaking of betting and Clemson, we could not believe this stat when I read it in ESPN.com Pat Forde's weekly column:

Mind-blowing stat of the month: Clemson has been favored in each of its past 11 losses. In the Tigers' past 34 games, they have been underdogs only three times, all of them against Florida State and Tommy's dad, Bobby Bowden. Clemson won all three times. Start the family collusion investigation!


I can't even imagine the Eagles being favored that often. Expectations are certainly high at Clemson this year (aren't expectations always high at Clemson?), and the Tigers have the week off to regroup and prepare for a huge Thursday night game in Winston-Salem.


Finally, a Happy Time shout out to Elizabeth Hasselbeck for your guest appearance on last weekend's episode of Entourage. Well played, even if you did slap around an emotionally distraught Johnny Drama in front of a live television audience ...

"You are not wearing a tank top and f**king shorts on The View, Drama. Who are you, Richard Simmons?"

Game preview and the Big Finish later today since it's a three-day weekend for Jeff and I. Wooooooo!