Brian: I love Eagles basketball but I don't purport to be an expert of college basketball. So to preview this year's men's basketball team, we've asked our good friend and BC Interruption reader Raj to give us a preview of the team. 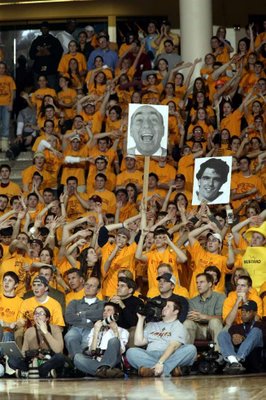 Raj: While we lost a fair amount of bodies in the off-season due to transfers, the departure of John Oates and Tyrelle Blair to graduation leaves a big hole in the middle. After a disappointing finish in 2008, can the Eagles sink any lower?

Well, after a last place finish in the ACC, the simple answer is no. The Eagles were considered a young team last year and we haven’t grown up much, if at all, coming into this season. Our roster now consists of: 3 freshmen, 6 sophomores, 1 junior and an all ACC-performing senior in Tyrese Rice.

Tyrese Rice (SR) 21.0ppg 3.3 rebs 5.0 assists 1.6 stls in 38.1 mins
As an All-ACC Performer, Tyrese Rice will shoulder the load scoring and can expect his assist numbers to approach 8 as he finds more and more scoring options with the development of our younger players throughout the season.

Biko Paris (SO) 5. 7 pts 1.7 rebs 2.9 assists
A solid point guard with the ability to score, he will see some more time on the court both as Rice’s backup and also in a 2 guard backcourt as Reggie Jackson continues to develop.

Reggie Jackson (FR)
Jackson was BC’s top recruit for the incoming season and, while he is obviously a Division I athlete, it will be interesting to see him compete against ACC competition night in and night out. Interesting fact: RJ was born in Italy and will wear the number 0, so let’s hope that the similarities between Reggie, Kobe and Gilbert Arenas translate to the court.

Dallas Elmore (FR)
Another Colorado recruit, provides some height at the guard spot at 6'5". Don’t expect to see much of him, however, as Skinner is infamous for bringing players who are not top recruits along slowly.

Corey Raji (SO) 8.3 pts 4.3 rebs 0.9 assists (60.8 percent from the floor)
My favorite for obvious reasons but, in addition, his spark and intensity are much needed for what, at times, seems like a lethargic BC team. He is aggressive on defense and the boards, is smart with the ball, and reminds me of a 2000 freshman (Dare I say it? Ryan Sidney). Here’s hoping Raji can keep the intensity up and that he continues to enjoy his role off the bench, because I believe that’s where he is best suited.

Rakim Sanders (SO) 11.3 points, 4.6 rebs and 1.7 assists per game
I am expecting big things from Sanders in his sophomore year. Throughout his freshman campaign I saw flashes of potential: NBA type potential. We also witnessed the SWAGGER against Kansas. I like that attitude, and expect to see more of it on a consistent basis this season.

Joe Trapani (SO)
JT is now joining the likes of Brian Ross, Nate Doornekamp, and John Oates as tall white guys at BC who have fallen in love with the 3 pt line. As a transfer he has had a season to get acclimated with the flex offense, and Skinner will be forced to line him up at the PF position due to our lack of depth.

Tyler Roche (JR) 3.8 pts 1.9 rebs 1.6 assists
No offense to him but I can’t understand why he is on a Division I team, or how he sees any playing time whatsoever. He does play with heart, I’ll give him that, but then again, so would I if that’s all I had. Note to Skinner, stay away from New Hampshire’s High School Player of the Year.

Cortney Dunn (SO) 1.7 pts and 0.7 rebs
The other players on the team are high on Dunn, but I’ve yet to see anything out of him (which I admit is due mostly to his lack of playing time). On what I expect to be a foul plagued team, expect to see more Dunn, and hopefully less of Roche.

Josh Southern (SO) 5.7 pts and 3.4 rebs
Great upside for this sophomore, who played under 20 minutes a game but came on strong late last season. Offensively he will be the best center we have had in the post since pre-2000. Whether he is quick and strong enough to bang on the boards is another question. We should expect Josh to average close to a double-double this season as long as he can stay out of foul trouble.

Evan Ravenel (FR)
A much needed big body in the middle. While very raw, he is an athlete at the center position, putting up 16 pts, 12 rebs and 5 blocks. I know everyone wants to make a name for themselves, but I see him becoming the next Uka Agbai. He is a big body that moves pretty well, and he will definitely see minutes this year because of the lack of depth at the center position.

As much as I love Skinner and his stylish threads, his Eastern Clothing of Watertown suits won’t save Skinner with another year like last year. Hopefully Skinner adapts to his personnel a little better. (They are who we thought they were!!!!) Our turnovers and our inability to bring the ball up against pressure should be corrected in practice. And when the right personnel isn’t in there, call a timeout and get them in. We have more than enough ball handlers and if we need to play small ball, maybe that’s something we should try.

Skinner has compiled a great record while at Boston College, but his lack of in-game coaching is worrisome. Skinner is going to need to get this team ready to play, get them to get up for every game, and keep them focused. In the past he has been able to rely on his senior leadership to weather droughts in games, but he is going to need to take charge with such a young team. By getting involved early, he could have possibly prevented 7 losses last year.

We aren’t going to be a defensive-minded team, so I turn to our offense or lack thereof. I am beginning to question the effectiveness of our Flex offense, which has been quite successful in years past because of our ability to recruit high basketball IQ players who have great vision, passing ability, and a knack for finishing. Young players are prone to make less than intelligent decisions, and rely too heavily on athleticism, so our flex offense has struggled. Also, our lack of a tough inside player has led to us settling for outside jump shots. Skinner has adopted the Herman Boone approach, "I run 6 plays split veer, it’s like novocaine, just give it time, it always works."

Is it time for us to run a new offense or mix in some different looks?

While there will be many ups and downs to the season, with a challenging ACC schedule which involves both North Carolina and Duke, Tyrese Rice will keep us in most games, and expect Sanders, Paris, Raji and Southern to contribute more and more as the season progresses. Skinner seems set on starting Corey Raji. Let’s hope the emergence of Reggie Jackson forces his hand to move Raji into a more natural sixth man role. We will see BC be challenged more than in years past within the first 10 games, with a schedule that does not involve the usual pushovers. With our core of sophomores let’s look for our squad to be able to close out those games that we crumbled in down the stretch.

Despite the poor record, last year’s offense was surprisingly efficient once we were able to take a shot. Look for the Eagles to get more offensive sets in, and that begins and ends with limiting turnovers. In the past, we were not a fast-breaking team so our sets in the flex offense were deliberate and ate up a lot of clock. Look for us to get a quick outlet and run a little more, hopefully leading to some easy point to supplement the Flex offense. Looking at stats from the 2007-2008 season, two particular statistics catch my eye: points per shot (PPS) and field goal attempts (FGA). Looking at the teams below that qualified for post season play, we only ranked behind #1 UNC in PPS and were dead last in the ACC in FGA.

To ensure that we get enough FGA to keep up with the scoring in the ACC, the Eagles will have to crash the boards as they were among the bottom three of the conference in rebounding. Once they control the defensive boards, they will be able to get more opportunities on offense. Also look for us to take better care of the ball and not turnover the ball in the backcourt. Expect a faster tempo in attempt to capitalize on our team speed, and also make up for the lack of frontcourt scoring from the power forward and center positions which is a requirement for the Flex offense.

One thing to look for is how the Eagles react on the defensive end. With much more team speed, let’s look for BC to rely less on a big body in the middle (Tyrelle Blair/Sean Williams) and more on pressure defense that jumps passing lanes, and denies the entry pass to the post. Could Skinner use a deeper rotation and set up a full court press? Can't wait to see what he has up French-cuffed sleeves.