BC-Virginia Tech and the Big Finish

Share All sharing options for: BC-Virginia Tech and the Big Finish 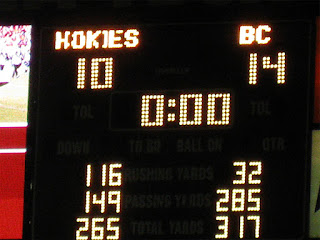 Brian: The #17 Virginia Tech Hokies come to Chestnut Hill for a Saturday night tilt against BC. I haven't been this excited to attend a football game since the ACC Championship Game or maybe even the division-clinching BC-Clemson game last year. Give me the keys to winning this game.

Jeff: Special teams, special teams and special teams. Playing against Virginia Tech everyone is naturally and rightfully going to talk about Beamerball. We all know Frank Beamer coaches up the special teams for Virginia Tech so they can certainly win some games on special teams which not every team can. Meanwhile, BC's placekicker has struggled, kickoffs have yielded great field position for the other team, and punts have been decent at times and shanked other times. If our special teams play well tomorrow, we will be in a very good position to win the game because we have an edge on both offense and defense.

Brian: I agree with that. The other key to the game is to limit the mistakes and force the turnover. Georgia Tech outgained the Hokies by 140 yards in their 20-17 loss. The key to the game was turnover differential. Georgia Tech coughed the ball up 2 times and Josh Nesbitt threw a pick, and the Hokies didn't turn the ball over. If BC turns the ball over running the ball or Crane doesn't manage the game efficiently, the Eagles could be in for a long night.


Brian: You and I both watcheed the Florida State Seminoles knock off Tom O'Brien and the Wolfpack 26-17 last night to improve to 5-1, 2-1 ACC. No one in the ACC Roundtable seemed to think so, but are the Seminoles a legitimate threat to win the Atlantic Division this year?

Jeff: No. Right now there are only two teams that control their own destiny in the Atlantic. Boston College and Wake Forest. I would put Florida State at a distant third to win the division right now. Speaking of the Atlantic though, can someone inform Coach Jags that Virginia Tech plays in the Coastal division? In his letter to the fans this week he calls the Hokies our "ACC Atlantic Division rival."

I would like to thank you on behalf of the Eagles football team for your support at the first three home games of the 2008 season.

We are looking forward to the opportunity to play our ACC Atlantic Division rival Virginia Tech Saturday night on ESPN2. The Hokies are the defending ACC Champions and we anticipate another highly competitive battle on the field.


Jeff: Since the NC State game we have learned that the coaches planned on letting Crane loose and that Crane knew before the game that it was going to be a make or break game for his season. What's in store for Crane tomorrow? Is Logan running or passing or a little of both?

Brian: Crane will be fine if he limits the turnovers. Giving up bad field position and losing the turnover battle 0-2 to NC State kept the Wolfpack in that game two weeks ago. I expect Logan to keep Bud Foster's defense off balance with a healthy mix of run and pass, but if I had to guess whether we'll run more or pass more, I'd say we are going to call more pass plays tomorrow than running plays.


Brian: Injured cornerback DeLeon Gause is expected to play this Saturday, however freshman Donnie Fletcher will probably get the start. You have any cause for concern over this move?

Jeff: No concern here, it is good to hear the Gause should get some playing time.


Brian: Last one, back in August this was one of two games in which we disagreed on the outcome. I had Boston College winning this game 17-14 (I've since closed the margin of victory to 21-20 in our game of Toss Up over at Gobbler Country) while you had Virginia Tech winning 28-13. Of course, in the preseason we knew next to nothing about this team. So knowing what you know now, are you sticking to your prediction?

Jeff: I have changed my tune but I sold the exclusive rights to my final score prediction to Gobbler Country.


It's week 8 and we are halfway through our 2008 Pick 5 challenge. Let us recap the standings:

Brian: Jeff: Your Georgia Tech pick is just a total guess because no one knows how Clemson will come out and play. UNC is a dangerous pick as well and I probably would've gone the other way with the other two ACC picks.

Brian: Georgia Tech is NOT a total guess. Georgia Tech's defensive line is going to destroy the Tigers O-line. All Virginia needed was a new quarterback. Aren't they living up to your 2nd place Coastal Division prediction finally?

Jeff: You have no idea how Clemson is going to play Saturday, nor does anyone else. Not saying Georgia Tech won't win, but there is a lot more uncertainty in that game than ANY other game Saturday so you are guessing.

Jeff:
If you are going to the game, drop us a comment or send us a note. Go Eagles! See you on campus Saturday night.