ACC Roundtable 2: Changing of the Guard

Share All sharing options for: ACC Roundtable 2: Changing of the Guard

This week’s ACC Roundtable is being hosted by Mike over at Tar Heel Mania, which, as the name suggests, is a North Carolina sports blog (and our opponent on Saturday). Mike will publish a wrap-up of the discussion after the rest of the ACC bloggers weigh in.

This week’s discussion centers on the changing of the guard atop the ACC’s ranked teams. #17 Virginia Tech, #18 North Carolina and #21 Wake Forest were all bounced from the Top 25 after dropping road games to conference opponents. Enter #21 Georgia Tech, #23 Boston College and #24 Florida State atop the list of ACC title game contenders. 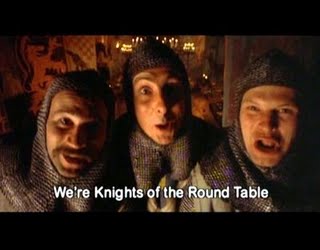 Okay, first things first: could someone please explain what the hell just happened this past Saturday?

I tried to start explaining this in the comments section of a previous post. I just don’t think the ACC has been as crazy as the mainstream media and sports writers have made it out to be. The reasons the perception of the conference is down and last weekend’s results seem crazy to some can be explained by some rational logic. The reason why things seem crazy is because sports writers and media pundits are simply easily distracted by shiny things (and of course, blogfrica is not exempt from jumping from bandwagon to bandwagon) ...

See the progression of the MSM’s ACC champion "lock" ...

Preseason: Clemson is the team to beat, oh wait, they have no O-line and are coaching deficient ...

Week 3-4: Wake Forest is the team to beat, oh wait, they can’t score touchdowns in league games and dropped to the Midshipmen ...

Week 5-6: Carolina is resurgent! Butch Davis is king! They beat Rutgers on the road and Notre Dame at home!! Oh wait, Rutgers is Rutgers again and the Irish have gotten fat over wins against San Diego State (1-6), Michigan (2-5), Stanford (4-4) and Purdue (2-5). Combined record 9-20.

Week 7: Virginia Tech, left for dead after a blocked punt gave the ECU Pirates a win over the Hokies in Charlotte, are now the team to beat after knocking off Coastal division champion hopefuls Georgia Tech and North Carolina. Oh wait, they are inept on offense ...

That being said, my guess is we’ll hear about 2-3 more teams as the conference front-runner before the year is out (Virginia? Maryland? Boston College?). Will the real ACC champion please step up so we can end all this prognosticating already?

The above frames the conversation about what exactly happened last weekend.

#21 Wake Forest 0, Maryland 26. The Sam Swank-less Deacons had trouble scoring points, as redshirt freshman Shane Popham missed FGs from 47 and 40 yards. Should we be surprised? Absolutely not - when your school’s leading scorer in sidelined and all your team has managed to do in two league games is 3 point you to death. On the other side of the ball, Maryland got their offensive playmakers Darrius Heyward-Bey and Da’Rel Scott going, and that was all the Terps needed to pull out the home win.

#18 North Carolina 13, Virginia 16 OT. Over the last three games, Virginia has suddenly found its offense in a new quarterback (Verica) and running back (Peerman). They have been very good in their past three games – all at home - but we’ll see how they handle their trip to Atlanta this weekend.

So with all that, we can only implore everyone to give this ACC season some time. The lack of a wire-to-wire presumptive champ is what is hurting this league’s image when, in fact, this conference is probably the toughest top to bottom in all of college football. Don’t believe me? Check out any one of these polls or computer rankings that rank all 120 I-A teams. The ACC might not have a top 10 team in that list, but they don’t have a team in the 100+ range either, which is more than can be said of the other 5 BCS conferences. And if you throw out NC State (ranked 96), the rest of the conference falls within the 15-59 range which is probably the closest coupling of teams in any one conference.


Good Maryland, bad Maryland. We’ve seen a fair share of both in 2008. Good Maryland may be the best team in the ACC, while bad Maryland could probably lose by 20 to anyone left on their schedule. Which Maryland do we see for the rest of the season and where do you expect the Terps to finish?

So long as Maryland can get their offensive playmakers involved, I think we’ll see much more of the good Maryland than you’ll see the bad Maryland. Their remaining schedule isn’t necessarily too favorable, with trips to Virginia Tech and Boston College upcoming, but it is manageable. The Terps have been terrible on the road – losing to Middle Tennessee State (why you even schedule this game, I have no idea) and getting blanked by Virginia. If Clemson actually is coached in the second half of their game against Maryland in Death Valley, the Terrapins could easily be 0-3 on the road this season.

We are predicting the Terps finish out their ACC schedule with a 3-2 mark pushing their overall record to 5-3. However, we don’t think that will be enough to win the division and represent the Atlantic in Tampa.


Injuries are a part of college football, but they seem to have ravaged ACC offenses this year. Wake Forest has been without Sam Swank, Clemson is without C.J. Spiller, UNC is without T.J. Yates and Brandon Tate, Virginia Tech is without Kenny Lewis Jr., and NC State is without just about everybody. Which team misses their fallen star(s) most and why?

North Carolina head coach Butch Davis was quoted as saying "Brandon not being here has nothing to do with us not winning" following the loss to Virginia. I tend to agree with a guy that built a National Championship team and guided the Miami Hurricanes to a 51-20 mark. So we’ll take his word for it.

While NC State’s injury situation has been unfortunate, the Wolfpack were never really contenders in the league this year.

So we’ll go with Wake Forest’s Sam Swank. When your star kicker scores all of your team’s points in a league game, and you end up winning the game, you are going to miss him. When you get shutout on the road by schizo Maryland and you miss two field goals, you miss your kicker. Which is a shame, because kickers shouldn’t be that important to your football team’s success. Nevertheless, it is claimed that the ACC is a defensive league, and you can take all the points you can get in league play. 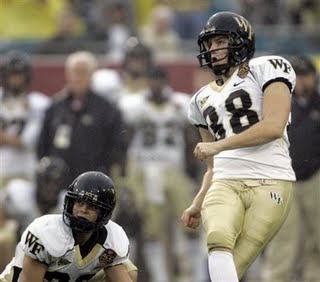 Last one: the pretty much unanimous division champs were Virginia Tech and Wake Forest last week. Given all the craziness that just happened, give us your updated ACC Championship scenario.

Jeff and I agree. We think Georgia Tech is going to find a way to keep winning, and Virginia Tech somehow manages to blow their 2 game stranglehold on the Coastal Division crown with 5 to play.

In the Atlantic, we let out homerism show and have the Eagles now in the ACC Championship game. Yes, Wake’s schedule looks manageable from here on out, but their struggling offense is too big of a red flag for us to pencil them in for playing in Tampa. We aren’t drinking the Seminole kool-aid just yet (Ohhh yeah!!!) and Maryland has to travel to Chestnut Hill at season’s end and as pointed out earlier, they haven't shown they are very good on the road.