Share All sharing options for: Yellow Jacket Game Predictions and the Big Finish 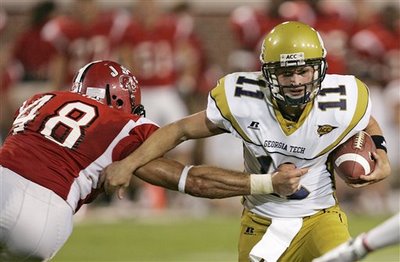 Brian: About a month ago now, we previewed the Georgia Tech game. Now that we've gotten a chance to see BC play, heard about what Paul Johnson and the Jackets did to Jacksonville State in week 1, and have a clearer picture of the injury situation and weather conditions for tomorrow's game, want to tweak your preseason prediction at all? How do you see this game going down?

Jeff: After last weeked I think BC fans and Georgia Tech fans both saw good things from their teams last week but against weaker than ACC caliber opponents so there are still a lot of unanswered questions. After what we saw last week from Georgia Tech I think it's safe to say we won't shut them out but I'll still stick with my 24-10 prediction. I'm a little worried about BC kicking a FG in order to get to 24, but we'll see. Maybe Jags will give our kickers a chance since it is at home.

Brian: Not sure how much the weather will play a factor in the kicking game or in the game in general this weekend. We might not get that many good opportunities to kick a field goal. I am going to stick with my original prediction too. 28-20 Eagles. Although I have a feeling that it might be a lower scoring affair now if it's raining.

Brian: Great article from the Orlando Sentinel about the death of great college football rivalries. While reading the article, I felt like you could easily replace "Florida vs. Miami" or "USF vs. UCF" with "BC vs. Notre Dame." Jeff, your thoughts?

Jeff: Notre Dame is a different animal than any of the schools named in this article because ND is independent. They need Boston College-like teams on their schedule and Gene won't say no if Notre Dame is willing to renew.

Brian: I think much like USF is moving on from playing UCF, Notre Dame is moving on as well and won't renew. They just grew too tired of losing to the Eagles, I guess.


Jeff: Since you love our receivers, you like Gunnell's quote in the Heights calling them "the Boston Three Party"?

Brian: I do believe that phrase is trademarked? Hate all you want on our receivers, Jeff, they are going to be good this year (so long as Crane can get them the ball). They probably won't put up huge numbers this weekend if the weather doesn't cooperate, but I expect much more improved play from the receiving corps year. 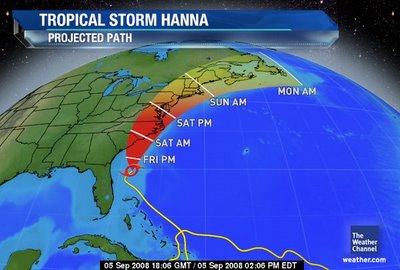 Brian: I thought we were playing the Yellow Jackets and not the Hurricanes? Hurricane Hanna (now downgraded to a Tropical Storm, much like the University of Miami's football team ... ZING) projected to roll up the East Coast this weekend just in time for the Saturday noon start. Will weather play a factor tomorrow and if so, who gains an advantage?

Jeff: The weather will not play a big role in the game tomorrow. The worst won't get there as early as originally predicted. It's only just getting to me down here now.


Jeff: Most intriguing college football matchup this weekend (outside of the game being played in Chestnut Hill, of course)?

Brian: I probably won't get to watch a lot of football this weekend given that we are back to a non-Labor Day weekend schedule. A lot of the teams in the Top 25 are playing inferior opponents this week, so I'll go with Mississippi at Wake Forest. Given what happened last weekend, most of the mainstream media is quick to jump off the Clemson bandwagon and onto the "Wake Forest as ACC champion" bandwagon. The ACC desperately needs a win against a SEC opponent. And I think Ole Miss might sneak up on some teams this year, so this game is a big out of conference ACC-SEC matchup (I don't give Miami much of a shot against Florida).


Brian: Last one, give me an offensive and a defensive MVP for tomorrow's game.

Jeff: On offense I'm going with Josh Haden and on defense I like BJ Raji.

Brian: I'll be on the bus to Boston tonight. If you are in the New York/New Jersey or Philadelphia areas and want to watch the game, better get to a BC game watch. The game is blacked out in those television markets. Television affiliate list here.

I'll be tailgating around the Commonwealth Avenue parking garage tomorrow and will be wearing the below "break the Coulter/Krugman curse" gear: 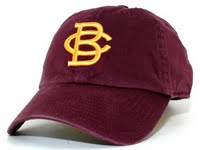 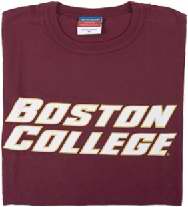 I'm sticking with what works, having won in Cleveland last weekend (I'm a man of science). Unfortunately, I had to retire last year's Ryan for Heisman shirt. If you see us, stop on by and say hello.

Enjoy the game. If you are online during the game, shoot on over to Eagle in Atlanta to leave your in-game thoughts. And finally, if you'd like to suggest future post topics or just have general feedback, leave us a note.