Road Trip Report: Back from the Home Opener

Share All sharing options for: Road Trip Report: Back from the Home Opener 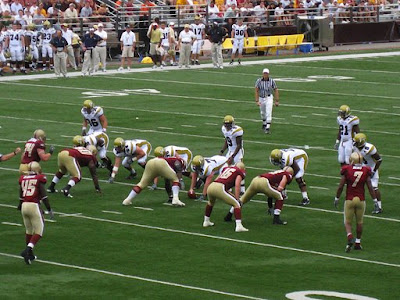 I'm back from campus for the game against Georgia Tech. Jeff and I will share our thoughts on the disappointing loss to the Yellow Jackets tomorrow, but I wanted to share my thoughts on the weekend in Boston.

Overall it was a really fun weekend. I'm obviously still a little _______ (insert one here - frustrated / pissed / disappointed) in the game result, but it's always great to be back on campus.

We woke up early Saturday morning to gray, cloudy skies. We thought it was going to be a miserable day weather-wise with the Tropical Storm rolling up the coast so we dressed appropriately. We set out for Cleveland Circle early to get some supplies for the tailgate and the first thing I noticed when getting to the Circle was 5-6 Georgia Tech fans who were wearing Gold Rush gold-colored Yellow Jacket shirts.

Now, don't get me wrong, I think the "Gold Rush" campaign was a great concept in principle. Market the same colored gear to season ticket holders so that more fans on campus are wearing the same colored gear. I still don't understand though why they didn't match either the gold from the Superfan shirts or our maroon. Most of the Georgia Tech fans on campus were wearing "Gold Rush" gold or white colored t-shirts, so the new gear blended in the Yellow Jacket fan gear. (Also, Central Florida and Notre Dame come to town this year and also share gold as one of their primary colors). 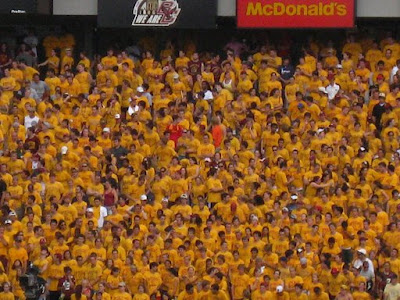 While I remain critical of the Gold Rush's execution, let me spend a few minutes praising one aspect of the BC tailgating experience yesterday - the student section. The student section looked awesome yesterday, even in person. (I'm guessing it looked even more impressive on television for those of you who were able to watch the game). By game time, the student section was nearly full of students clad in Superfan yellow. The student body excitement for the game was palpable, probably boistered by the freshmen experiencing BC football for the first time, and they did a great job of being loud and standing up most of the game.

While it was disappointing to see some empty seats in the upper deck of the end zones (official attendance: 40,106), tip of the cap to the students who made up for the non-sell out crowd in enthusiasm and color coordination.

We tailgated in the morning outside of the Commonwealth Avenue garage and caught up with friends old and new. One of the ACC.com cameramen stopped by our tailgate to take some video of the various tailgates. After he was finished taping, we asked where the footage was going and why he was on campus, and he mentioned that it was the ACC game of the week. I quipped that it was the only conference game this week, hence why they were in Chestnut Hill today, and he agreed.

Although it rained for about 5 seconds while tailgating, by game time most of the rain had stopped and by halftime there were only a couple of clouds in the sky. We really weren't prepared for the heat or the sunshine (and maybe neither were the Eagles?). By the end of the game, we were hot, dehydrated and bummed out about the Eagles loss. The clouds looked a little more ominous at the end of the game, but it didn't open up until much later Saturday night. 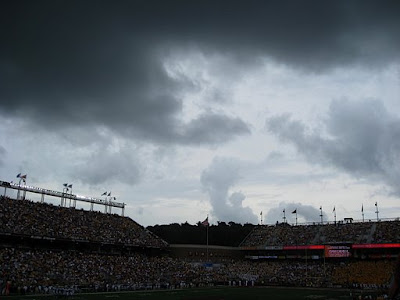 After the game, we tailgated for about an hour longer before hitting up (where else?) Mary Ann's. Our friends Raj and Andy housed a bunch of other kids in the basketball game in the back, and we had a couple of beers and commiserated with one another about the loss.

We watched a bit of the Notre Dame vs. San Diego State game and the little consolidation to yesterday's performance was - yes - Notre Dame still sucks.

MaryAnn's embraces technology. There's also this new thing called BarCast now at MA's. Basically it's a LCD flatscreen tv that shows a bunch of ads but also allows you to send text messages to a phone number and those text messages show up on the television. I texted Jeff instructions on how to send a message to be displayed on the screen. A few minutes later there was a text on the board that said "Go Clemson! Have a Busch Light for me." Coincidence? 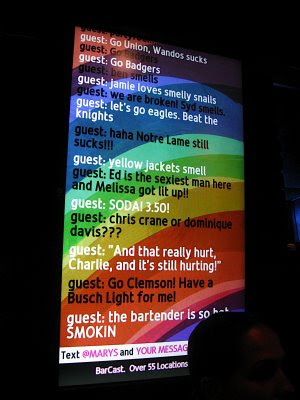 Also, what's up with Mary Ann's closing during the day on Saturdays when it is a day game start time? Around 6pm they kick everyone out for an hour or so to restock and get ready for the evening. Kinda lame, but whatever. 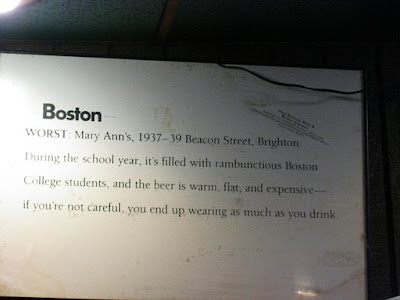 Never a truer word has been spoken about MaryAnn's.

In the cab ride back to our hotel, one of our friends was talking to his mom and she asked if Boston College had already played and how the game went. He quipped back, "We played, we lost, we're crap."

Pretty much sums up the Eagles performance yesterday.

After Mary Ann's, we got ready for an evening out, went to Boston Beer Works near Fenway, had dinner, a few more drinks and caught up on the rest of the day's college football action. Central Florida threatened South Florida but came up short in overtime (watch out Eagles!), and Tim Tebow and Florida took care of Miami after the Hurricanes hung around for over a half.

On Sunday, we took the bus back to New York. During a visit to the BC Bookstore on Saturday, I caved and picked up the Eagles Reebok Apache Jacket (25% off!) thinking that it was going to rain during the game. You may remember this jacket featured in the "Do The Hokie Pokie" instructional video featuring Jeff Jagodzinski last October.

Even though I was still disappointed in the loss, I ended up wearing my new jacket the entire bus ride home. When I flew down to Jacksonville last December for the ACC Championship game, I was impressed by the number of Hokie fans that were wearing their Chicago maroon and Burnt orange gear in the airport after the game on Sunday. I struck up a conversation with one of them and commented on how impressed I was in how many of their fans were wearing Hokie gear in the airport after the game. Something this Hokie fan said has stuck with me since.


Go to the game? Share your experience in the comments section below.