We attempt to beat the midweek blues with a game of Over Under. 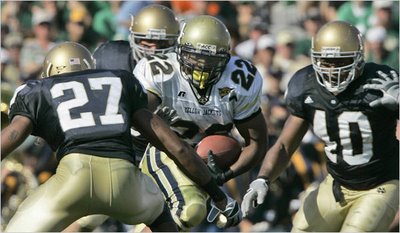 Over/Under - 250 yards on the ground for Georgia Tech this weekend.

Brian: Slightly over. I expect Georgia Tech to run for about 275 yards this weekend and only grab about 75-100 in the air. Not to mention the fact that Paul Johnson likes to go for it on fourth down, creating more opportunities to accumulate yards.

Jeff: Last year Paul Johnson's Navy team averaged 348.8 rushing yards per game. Georgia Tech is going to put up similar numbers this year even though they might not win as many games as Navy did last year. But, our run defense is the strength of our team and that is well-known throughout the conference so I'll expect to see a little more play-action from Georgia Tech and they'll go under 250 rushing yards. 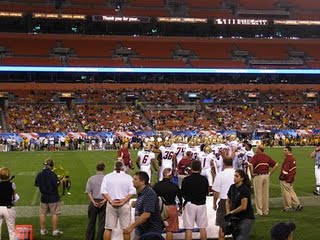 Over/Under 80 other college football Kent State opponents would've yielded a larger crowd than BC did last weekend drawing a mere 10,788

Brian: I'm not dignifying this question with an answer. It's not really BC's fault this game was poorly attended. Kent State didn't hold up their end of the bargain, and there would have been a lot more fans in the stadium had the game been played in Dix Stadium. Not to mention the game was hardly marketed at all. Plus, most of these BCS schools from the Big Ten, Big XII or SEC don't even know what it's like to go to an away football game against a (historically bad) MAC team. These larger schools play all of their out of conference games against non-BCS conference opponents at home (see: Ohio State playing every other JV team in the state of Ohio in the Horseshoe). So instead of answering this question, I'll switch it up and say over/under two more years of financial viability for the Patriot Bowl in Cleveland. Besides, what's patriotic about Cleveland? Nothing.

Jeff: It seems the Kent State AD wants to keep trying so I'll go over 2 years. But, the question didn't blame BC. If USC had come to Cleveland the stadium would've been a lot closer to full than empty and it would've been with a lot of KSU fans knowing that their team will lose. BC, unfortunately, is a team that KSU fans knew they would not beat, yet were not intrigued by the matchup enough to come out and see the loss because we don't have a big name head coach, a Heisman candidate, or great college football tradition. Other teams who also fit into these categories, might've traveled more fans themselves to help fill seats.

Brian: I am going under. Boston College is much better than Maryland, who struggled against a Joe Flacco-less Delaware. Georgia Tech beat up on Jacksonville State and is ranked #3? Florida State didn't even play! Miami has a quarterback controversy. Clemson played with no heart.

Sure, we didn't wow anyone with our offense in Week 1, but why should we empty the Steve Logan playbook when we controlled the game throughout? We still have some plays up our sleeves.

Jeff: We might never wow anyone with our offense this year but clearly we're both going under on this one. Georgia Tech somehow ranks #3 on this list but fortunately ACC play begins for us Saturday and by the end of the game either Boston or Georgia Tech will have made a statement.

Over/Under - 200 passing yards for Matt Ryan in his pro debut at home against the Lions.

Jeff: Forever the Matt Ryan optimist I am going over!

Brian: Yeah, the Detroit Lions aren't really known for their defense. While I expect Matt to make some mistakes and maybe the touchdown to interception ratio won't be flashy, I do expect him to throw for more than 200 yards. So I will begrudingly agree with you. Over.

Boston College's mens soccer team was upset this past weekend 1-0 by Providence. Next up for the Eagles, they have games Friday and Sunday against Villanova and St. John's in the adidas-Brown Classic in Providence.

Over/Under - One and a half victories for the men this weekend.

Brian: I am going over. I'll predict that the Eagles rebound after a loss to the Friars to win the adidas-Brown Classic. While St. John's has historically been a strong team in the Big East, I don't see the Eagles being tripped up by either the Red Storm or the Wildcats.

Jeff: The Eagles are the defending conference champs! Of course they'll bounce back. Over. 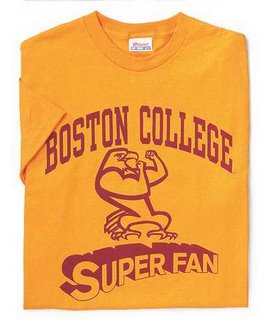 Last one, Over/Under - Wearing a BC Superfan shirt 5 years after you've graduated.

Jeff: Brian, do the University and the Athletic Department a service and stop telling people to wear maroon when they are launching a campaign to wear gold. Anyone going to the game this weekend, please wear your superfan shirt or other gold BC shirt or yellow/gold polo. Just give this initiative a chance. Please.

Brian: I wore a maroon Boston College t-shirt and a maroon BC ballcap this past weekend, so I'm sticking with what works, Jeff. It's science.