It's time to preview this weekend's football matchup with a game where we come up with ridiculously uniformed odds - Oddsmakers.

We were left coming out of the loss to Georgia Tech with a lot of questions about our starting quarterback. Odds that Chris Crane plays every snap at QB this Saturday?


Jeff: Well there is always a chance of injury which would eliminate him from playing every down. But there is a much better chance that Jags just finds a series to give someone else a chance under center. If we are up two scores in the second quarter I expect to see someone other than Crane out there for a series. 5%.

Brian: I'm going to go even lower. 0%! No way we don't see another Eagle under center this Saturday. Jags will throw someone else in there who isn't wearing #10. It could be to get Dominique Davis some reps under center in the second quarter or at the end of the game. It could even be Billy Flutie under center, which would make our boy Andy's day. Logan might also have some direct snap plays in his playbook with Josh Haden or Jeff Smith under center. So, in short, no way this happens. We'll see someone else other than Crane under center. 0%! 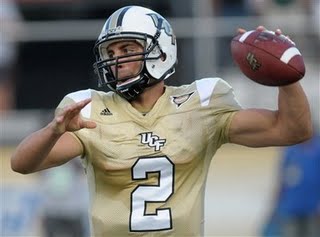 In two games, Central Florida quarterback Michael Greco is 26 for 48 with two touchdowns and no INTs. The Boston College defense has tallied two interceptions this season, however, both of those interceptions came in the win against Kent State. Odds that Boston College picks off Greco for the first time this year?


Brian: Greco is more of a dual-threat quarterback, much like Georgia Tech's Josh Nesbitt. He's already rushed for over 100 yards this season on 19 carries. As such, he's less likely to try to press if the pass isn't there and instead pull it down and scamper for a few yards. I'm going to go somewhat low on this and say there's only a 40% chance the Eagles intercept Greco, although we might desperately need the defense to finally put some points on the board (see below).

Jeff: The chances that we see at least one interception on Saturday is very high so I am going to hope that it is someone in a maroon jersey catching it rather than throwing it so I am going to be optomistic here and say 85% chance that the Eagles get a pick.

Our highly touted defense goes into the game against Central Florida having not scored any points. Odds the BC defense gets on the board for the first time this season on Saturday and helps out the offense?


Jeff: This is a tough question. I hate to predict that BC's defense is going to score points because they can force several turnovers and make lots of great plays and still not score. I have absolutely no stats to back this up but I am going to guess that a college defense scores in 12% of the games they play so since BC's defense is above average and UCF is only an average opponent, I'll give them an extra 5% and say 17% chance that the defense gets in the endzone Saturday.

Brian: A surprisingly good guess as to the chance a defense scores points Jeff. Here are some stats: Last year, the Eagles defense scored in 3 of our 14 games (North Carolina State, Bowling Green and the ACC Championship Game vs. Virginia Tech), which was 21% of our games. In 2006, Dunbar and Tribble each turned turnovers into 6 points twice (Miami, Maryland and Florida State). In addition, the defense forced two safeties against Maine and Virginia Tech, tallying points in 5 of our 13 games. I am hoping that the defense is due for a big play so I'll go as high as 40% that the defense gets on the board this Saturday.


Brian: As a quick Pick 5 recap, I chose Boston College against the spread in week 1 and went on to go 5-0 that week. Then in week 2 I also went with the Eagles, Chris Crane stunk up the joint, the defense gave up one big play in the fourth quarter and the Eagles lost. Since week 2, I have gone a paltry 3-7 against the spread and the bottom fell out last week when I went 1-4. I'm definitely in need of a change of fortune here to hold onto my one game lead over Jeff. While I'm not going to chose this game in my Pick 5 this week, I am going to try to reverse my fortunes and say that - while the Eagles win on Saturday - they don't cover. I'm going low on this ... and will say 20% chance the Eagles cover the spread.

Jeff: I think the 10.5 point spread is a little high after UCF nearly knocked off South Florida, but I am going to go higher than Brian and say 49%.

The Eagles lost Matt Ryan to graduation this year and the Patriots lost Tom Brady to injury. Odds the Eagles win more games than the Pats this season?


Jeff: I think the Eagles will fairly easily win 8 games and go to a very winnable bowl game. That would mean that the Pats would basically have to miss the playoffs. Their is a slight chance that the Eagles win 10, 11, or 12 games this year but the Patriots still play a 16-game regular season plus the playoffs so the odds are fairly low. 15%.

Brian: 2%! This just ain't happening. Look, I agree that I still think the Eagles will have a fairly decent season and can still pull out a 8-4 or 9-3 season. That might not be enough to get back to the ACC Championship game though so you are looking at only 13 total games for the Eagles this year. The Patriots have at most 17 more games to play while the Eagles only have 12. Plus the Pats already are one win up on the Eagles. The Patriots may have the easiest schedule in the NFL this year, while the Eagles will probably only be favored in 3-4 of their remaining 10 regular season games (Central Florida, URI, @ North Carolina State and Notre Dame/Maryland). There's the slightest of chances I could be wrong about this one, so I go ridiculously low with only 2 percent.