Brian: I always have mixed feelings about the BYE weeks. The downside is we don't get to see the Eagles play. The upside is I get to watch a lot more college football and we don't have to worry about the Eagles! Not to mention this past weekend we got to see a whole lot of football involving the Eagles 2008 opponents. But what did we learn? Jeff was at Clemson this past weekend and got to see two of our ACC Atlantic opponents in action on Saturday. First up, what did you see from the Wolfpack and the Tigers?

Jeff: NC State is the worst team in the ACC. They have to be. The Wolfpack jumped out to the early lead when on the first play of the game Cullen Harper threw a pick 6. However the extra point was blocked and all that NC State could produce the rest of the game was 3 points. Meanwhile, Clemson is not all that good either. NC State was in the game until the fourth quarter.

Don't get me wrong, Clemson has a bunch of really good players, but they are clearly not a top 10 team as was expected before the season began. They are completely dependent on their speedsters breaking into some open space. They cannot control the game on the ground at all despite having two extremely talented backs. Meanwhile the defense only gave up 3 points, but if Tom O'Brien's Wolfpack didn't miss a 26 yard field goal and didn't otherwise just stink, they would've given up much more. As Heather Dinich points out they did still give up 288 yards of offense. Clemson won by 18 but that didn't cover the spread which gives some indication that it was not an impressive win.

Jeff: On to the shocker of the weekend. I didn't watch the game but the score indicates that Notre Dame beat Michigan easily. What happened here? Is Notre Dame gonna win 10+ games?

Brian: Notre Dame was able to capitalize on a bunch of Wolverine mistakes early in the first quarter to jump out to a 21-0 lead. Admittedly, I turned the game off after this. Brian over at mgoblog aptly described this matchup as a Cripple fight (South Park reference), and this analogy seems even more fitting after Coach Weis tore ligaments in his knee after an Irish player fell into him as he was blocked out of bounds on a punt return. I don't think Michigan is any good this year. 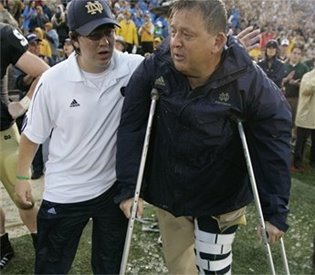 Now do I think Notre Dame will win 10 games this year? No. But I do expect them to win 6-7 and maybe even 8 games this year looking at their schedule. They are 2-0 and have very winnable games upcoming in Stanford, at Washington, Pittsburgh, at Navy and Syracuse.

Brian: Maryland was by far the most impressive Eagle opponent I watched this weekend. I mean, did you see the hit that made the Cal receiver puke ectoplasm?

Verdict is still out on whether Maryland is good or California was just really bad on Saturday, but I'm definitely not buying the Worldwide Leader's spin of "the game started at 9am for Cal so they were still sleeping through the first half." A Top 25 team should be ready to play anyone, anytime, anywhere. Give Maryland and the ACC some credit. I don't think there is a more Jekyll and Hyde team in all of college football than Maryland. You never know what you are going to get from week to week - a loss to Middle Tennessee State or a blowout win against a ranked Cal team. And yes, it was a blowout. To Cal's credit, they never stopped fighting, but this game wasn't as close as the final score indicated.

Jeff: The 9:00am start should not be an excuse for Cal but it is tougher to play on the road the further you travel and Cal did come storming back later in the game after going down big. Regardless of how good or bad Cal is though, I am going to need to see Maryland back this win up at some point before I worry about Maryland coming to Chestnut Hill this year and beating the Eagles.


Brian: Wake and Central Florida were off this week, and Georgia Tech vs. Virginia Tech wasn't televised in the NYC area. I was forced to watch Penn State destroy Syracuse in the Carrier Dome on ABC. Oh how far Orange football has fallen! Rhode Island wasn't televised, but they came up short in a 51-43 loss to New Hampshire.


Here are some other quick hit BC headlines from today (emptying out the inbox): 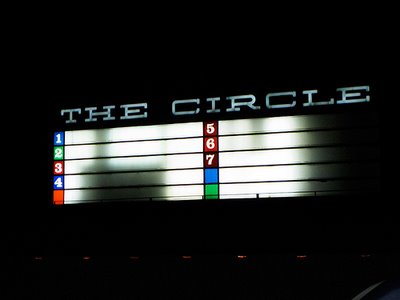