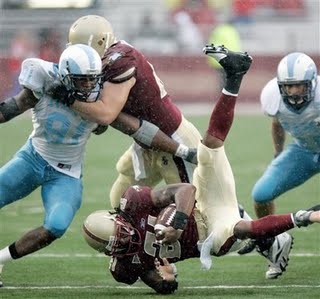 Brian: Neither Jeff and I were able to watch the game this past weekend so any analysis on this game was gathered from the game recaps and box scores. Leave your thoughts in the comment section below.

It looks like Chris Crane was ineffective against a bad Rhode Island team and Dominique Davis lead the team to the end zone on 4 of his first 5 possessions. Davis clearly didn't show off his arm, but the Eagles basically ran it down the Rams throat all day en route to a 42-0 win. So, Jeff, who starts this Saturday against North Carolina State?

Jeff: Honestly, I don't care who starts against North Carolina State. I am guessing it will still be Crane but should be Davis. Assuming Crane does start, we know that Davis will see quite a bit of action which is a very good thing. Hopefully he will lead the team down the field a few times and win the starting job for the rest of the season. I doubt Jags is going to bench Crane after Saturday's wet game against a 1-AA team. But I think he might if things are similar to last weekend against ACC competition on the road.

Brian: If Crane can't get it done against Rhode Island, he's not going to get any better as the competition gets tougher towards the second half of our schedule. Crane might start at NC State but he has to be on a short leash. The only thing that bothered me about Saturday's 42-0 win was that BC didn't throw the ball at all. Can Dominique Davis throw the ball? We just don't know. Clearly Crane can't get our passing game going though, despite the soggy conditions (1 of 4 for 6 yards?!).

Jeff: We know Crane can't throw the ball effectively. You are just wondering is Davis is as bad or worse? Who's better on their feet?

Brian: From everything I've seen so far, I think Davis is quicker on his feet and makes people miss a lot more than Crane does. The only problem is though that defenses don't have to respect Davis' passing ability (yet), and that's why Crane can run play action and walk into the end zone.

Brian: There's still a ton of ACC games to be played. But I think the favorites to go to Tampa are still Wake Forest and Virginia Tech. Georgia Tech has looked solid on the other side, but Virginia Tech already has two division wins (including the head-to-head) and a solid road victory at Nebraska. This isn't the toughest Hokie squad we've seen, but I think the Hokies do enough to win the Coastal since Georgia Tech and North Carolina seem to be the toughest competition on that side of the conference.

In the Atlantic, I still like Wake even though they suffered an embarrassing loss to unranked Navy this weekend. Clemson seems to be imploding and has the toughest part of their schedule next month - @ Wake Forest (Thursday), Georgia Tech and @ Boston College. It's possible that Clemson could lose all three of those games and be 3-5 by November.

Wake's toughest slate is next month as well. Clemson, @ Maryland and @ Miami. Their November schedule lightens up with the exception of Boston College and Vanderbilt, but I think they'll beat Clemson and Maryland. Jeff, who you got in Tampa?

Jeff: Amazingly enough, the Coastal is already won. The win by VT over Georgia Tech is too much for Georgia Tech to overcome and the other likely challengers, Miami and North Carolina, both already have one loss.

In the Atlantic, Maryland made a huge statement Saturday. Anyone who watched the game, including Maryland fans, would say that Clemson is the better team, but in conference play you get a win any way you can get it, especially on the road. NC State has no chance of going to Tampa. Wake and Maryland have already won road games within the division and Clemson and Florida State have been the victims.

If you handicap the field today it has to be something like Wake Forest 30%, Maryland 30%, Boston College 20%, Clemson 10% and Florida State 10%. In other words, it's wide open and the bottom line is I like BC's chances much more now than 2 weeks ago. Our offense is improving because of Montel Harris' strong performances and Crane spending some time on the bench. Meanwhile, Clemson and Wake Forest now look like very very winnable games. If it comes down to Boston College having to beat Maryland in the last game of the year, I really really like our chances.

Basically, if you'd give me slight odds, I'd put money down that Boston College will play the Hokies again in the championship game.

Brian: Honestly I'm kinda blown away that you still think Boston College will make it to the ACC Championship. While I understand that the race is still wide open, I haven't seen anything from this team (other than a good to really good running game) that would lead me to believe that we can get back to Tampa. Time will tell though.


Quickly... Jags will use a "feel" for who will play whenat the running back and quarterback positions ... Steve Conroy and Coach Jags agree with Jeff: the Atlantic division race is wide open ... Montel Harris earned a helmet sticker from HD for last Saturday's performance ... Finally, from Jags postgame comments:

Chris Crane is still the starter. I was happy to get Dominique Davis snaps but that's the way we'll probably go for the rest of the year. We'll play Chris to start and get Dominique in. That's our plan.