Brian: It certainly wasn't pretty, and the final score wasn't nearly indicative of the way this team played, but I'll take the win. The Eagles knock off the Central Florida Knights 34-7. We'll get to the various aspects of this game as we go, but let's start off with the #1 storyline coming out of the game on Saturday. Eagles fans were finally given a glimpse of the future when Dominique Davis led the Eagles on a 12 play, 47 yard drive in the first quarter. Jeff, your thoughts on what you saw from Davis and Crane's struggles? Do we really have a quarterback controversy on the Heights?

Jeff: Chris Crane looked miserable in the first half going three and out 3 times. I think he only got the ball again in the final possession of the first half because the coaches probably felt better with him running the 2 minute offense instead of Davis. Fortunately for him he drove BC down to the 5 yard line and then for a touchdown in our first possession of the second half. I thought Davis looked better in his limited action that Crane did. If you are Jags, who are you letting practice with the first string offense this week, Crane or Davis?

Brian: Crane will practice with the first team, no question. While I agree with you that Davis looked better in the first half, you have to think that field position had something to do with that. Crane had drives that started at the Boston College 14, 9 and 9 yard lines in the first half while Davis' first drive started nearly at midfield. When Davis took his second series in the second quarter, we had better field position but ended up going backwards in a three and out series. Then at the start of the second half, Jeff Smith almost broke the kickoff return, giving the Eagles great field position. The result of that drive? A rushing touchdown for Crane and the offense.

Jeff: Davis said he was surprised to get put back in the game after his first series. This tells me that the coaches only planned to give him one series and therefore probably didn't work him out with the first team much if at all this week. Crane is going to start against Rhode Island but I think Chris Crane lost his starting job in this game. Before the end of the season, Davis will start. Crane has no more eligibility after this year so at some point the scales are going to tip towards the younger quarterback Davis. The problem for our coaching staff here is that they are choosing between a C and a C+ player so its tough to determine who makes the fewest bad plays instead of determining who makes the most good/great plays.

As for the field position argument, it is important to note but it holds no water because Crane didn't even move the ball 10 yards in those three series combined. When the stats are that bad it doesn't matter where the drives started.

Brian: While our offense continues to sputter, hats off to the defensive unit on another solid performance. If not for the broken play QB scramble at the end of the first half, the Eagles defense would have pitched yet another shutout. Jeff, who stood out to you as the defensive MVP of this game?

Jeff: The defense was inches away from a shutout. Oh so close. Having 2 shutouts so far this season would've certainly gotten some national attention. As far as who was the MVP, Mark Herzlich seems to be around the ball all the time in the first three games this year and I am very happy with what I've seen from him, but I am going to go with Toal who led the team with 13 tackles yesterday.

Brian: Agreed that Toal and Herzlich had outstanding games. I'll give the game ball to the BC secondary who tallied four interceptions. UCF came into the game not having thrown an interception in their first two games. 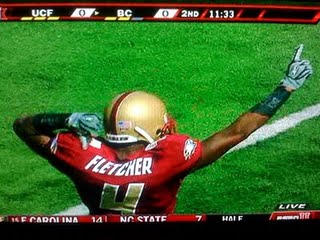 Also like to give some BC Interruption DAP to Donnie Fletcher who had his first collegiate interception and then proceeded to celebrate like a mad man. I'll give him a 5.0 / 6.0 on the celebration execution. The youngster was excited about the pick, and the celebration was funny although he definitely got chewed out by the coaching staff when he hit the sidelines. 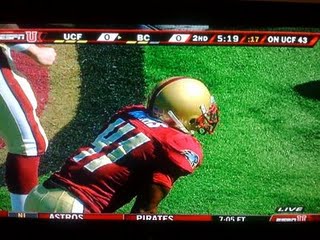 Jeff: Montel Harris beat Josh Haden and Jeff Smith to be the first Boston College back this season to rush for 100 yards in a game. A lot of people (but not me) think he should be the starter even after Haden returns from injury. Brian, your thoughts?

Brian: Harris looks good. I'm sort of the opinion that he should start, or at least split time 50/50 with Haden. He's shown good acceleration and break away speed, and ran for over 100 yards against a pretty good Central Florida defense. Some might be quick to jump on the Harris bandwagon early, but remember that the offensive line is getting more and more experience and played a pretty solid game blocking for Crane and Montel Harris. Ultimately, I'll be happy with Haden and Harris splitting time. The future looks promising for the Eagles backfield.

Jeff: As an Eagles fan you have to be extremely happy with what you see in the backfield and on the defensive side of the ball.

Brian: Unfortunately, I sound like a broken record. What, if anything, can be done about the Eagles kicking game? While we had flashes where our punting was good, there were other times where Quigley flat out shanked the ball, giving the Knights great field position. In particular, the two punts in the second quarter (for 24 and 17 yards, respectively) were downright ugly. Steve Aponavicious added to his field goal kicking woes with a 24 yard chip shot miss that hit the left upright.

Jeff: Flashes where our punting was good??? I must have missed that because I only remember the shanks in the first half and then fortunately the Eagles did not punt in the second half. I think we have to stick with Quigley though and he will get better. Aponavicious however, lets bench him. Aponavicius is a senior so lets start getting Billy Bennett ready in case we don't bring in any better recruits next year. Bennett at least has a stronger leg so let's see him start kicking some PATs and shorter field goals to get him used to being out there, especially next week against URI.

Brian: Well, at least Quigley's second punt of 47 yards was a good kick. Central Florida return man Joe Burnett is a threat to break one every time he touches the ball and it was nice to see a deep punt that forced Burnett to call for a fair catch. The other punts, as you mentioned, were pretty terrible. I don't know what to say about Aponavicius. While he is 5 of 7 on the year for field goal attempts, the two he missed looked pretty awful, and the miss vs. Georgia Tech was extremely costly.

Jeff: The offense did go 3 and out the first three times Crane was under center. Naturally the fans booed. If you had been there, would you have been booing too?

Brian: C'mon. Do you really think that less of me Jeff. Booing any of these kids is low class and beneath Boston College fans. Let's let Ohio State look bad when they boo senior quarterback Todd Boeckman. The boos have no place at home games; these kids are just playing a game. The Boston Globe's Mark Blaudschun agrees with me, although I didn't appreciate the shot he gave to Eagles road attendance and support.

"BC fans don't support the Eagles on the road. Not supporting them at home is even worse."

Not sure what's worse - booing Crane or taking shots at the Eagles fan base.

Jeff: The fans should not be booing at any college games at anyone other than officials. I feel bad for Crane, but that doesn't mean I don't want to see him benched.

With the win, Boston College extends the nation's longest non-conference game winning streak to 19 games (including bowl games). The Eagles last non-conference loss came at Wake Forest in our last year in the Big East.

The Boston Globe reports that Jags says that Crane will continue to be the starter, however, he expects Davis to get approximately 20 snaps a game going forward. Jags also had high praise for freshmen Montel Harris and Donnie Fletcher.

Cornerback DeLeon Gause and Josh Haden should be ready to go next week.