First, a little number about our opponent on Saturday.


Umm ... not sure what to think about that. Should I be worried about Spaziani's ability to defend the triple option this weekend, or impressed with the A-back and B-back's rapping skills?


Happy Birthday Eddie Waitkus (1919-1972). This is obviously posthumous, but Eddie played college baseball at Boston College before having a 11-year career in the Major Leagues. Eddie made pro stops with the Chicago Cubs, Philadelphia Phillies and the Baltimore Orioles.

In a completely bizarre sequence of events, Waitkus was shot in the chest by a crazed fan in 1949.

Waitkus was shot in the chest by Ruth Ann Steinhagen, an obsessed fan, on June 14, 1949 at the Edgewater Beach Hotel in Chicago. Steinhagen had become infatuated with him when he was a Cub, but seeing him every day in-season apparently kept her obsession in check. Once he was traded to the Phillies and would only be in Chicago 11 games in the season, her obsession grew to dangerous proportions.

She checked into the hotel using the alias of a former high school classmate of his, and left a note at the desk asking him to come to her hotel room on an urgent matter. She then shot him with a rifle, the bullet barely missing his heart. He nearly died several times on the operating table before the bullet was successfully removed. Steinhagen never stood trial, but instead was confined to a mental institution.


Bernard Malamud took parts of Waitkus' life story along with other major league legends and wrote a book in 1952 called The Natural, which was the basis for the 1984 movie.


Happy Anniversary to the Boston College men's football team. On this date 9 years ago, you defeated Baylor 30-29 in overtime to open the 1999 season in Chestnut Hill. This was a year before Jeff or I were freshmen at BC. The game was decided on a missed extra point in overtime, much like the 2006 home opener against Clemson. Eagles running back Cedric Washington, filling in for Mike Cloud (drafted by the Chiefs), rushed for 177 yards and three scores in the victory.

The Eagles would go on to post an 8-3 regular season record for third year coach Tom O'Brien after consecutive 4-7 seasons in 1997 and 1998. The 8-3 mark was good enough to earn the Eagles a spot in the 1999 Insight.com bowl against Colorado, a game we were pasted in 62-28.


Happy Trails Patriot Bowl attendance. The popular college football blog Everyday Should Be Saturday took another shot at the poorly attended opener at Cleveland Browns Stadium. The only consolation is that Christian and I are pictured in the photo that shows a mainly empty stadium. I was staring at this picture for a good minute until I realized that we were in the picture. Me, Christian and some random dude with a Salty Dog Cafe t-shirt. Photographic evidence that at least 3 fans were there to see the patriotic halftime show and/or the Eagles blank the Golden Flashes. 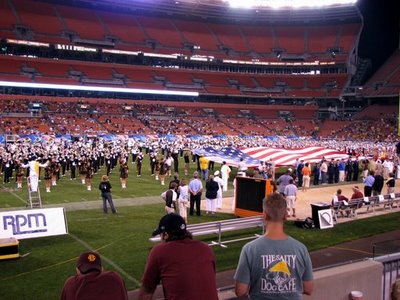 I guess it could have been a lot worse. We could have been the Florida Marlins who beat the Atlanta Braves last night in front of a crowd of 600 at Dolphin Stadium. Another nugget of information we learned from this past weekend in Cleveland while watching the ACC fall apart last weekend: when you see a '0' in the ones spot of an attendance figure, the figure is usually inflated. So you're telling me there was even less than 600 last night in Miami??


Also, Happy Trails to Georgia's number 1 ranking in football. The Dawgs were displaced by the USC Trojans for the top spot in both the Associated Press and the ESPN/USA Today Coaches' Poll. This marks a bit of a backlash against teams that begin the season against lesser, I-AA competition. Georgia defeated Georgia Southern 45-21 at home, while Southern Cal traveled across the country and destroyed Virginia 52-7 in Charlottesville.

After the disaster weekend that the ACC experienced last weekend, the ACC only has one team ranked in the Top 25 this week - Wake Forest at #20. Ouch.

While the Eagles didn't make the Top 25 this week in either poll, they did receive votes good enough for tied #29 (Florida State) in the AP, #30 in the ESPN/USA Today Coaches' poll, and tied for #31 in the week 1 blogpoll.