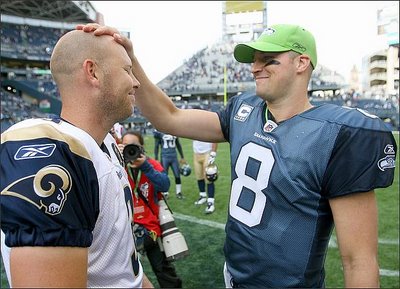 Happy 33rd Birthday Matt Hasselbeck. A three time Pro Bowl quarterback, Hasselbeck is in his 11th year in the NFL and 8th year with the Seattle Seahawks. Since joining Seattle in 2001, Hasselbeck has helped lead the Seahawks to somewhat of a football renaissance, including four straight NFC West titles, five straight playoff appearances and the franchise's only Super Bowl appearance (2005 NFC Champs).

Hasselbeck might be asking for a few more Seahawk wins for his birthday (just not against my Giants in two weeks, please). The Seahawks have started the season 1-2, including early losses to San Francisco and Buffalo. Both Matt and brother Tim were recruited out of Xaverian Brothers High School in Westwood, Massachusetts. Xaverian has also produced other standout Eagles like Derrick Knight and Dana Barros.


A not so Happy Anniversary to the Boston College football team. On this date 4 years ago, you dropped a game to then non-conference opponent Wake Forest 17-14 in Winston-Salem. Deacon quarterback Cody Randolph hit Willie Idlette on a 40 yard strike with 1:09 to play (his only catch of the game!). That touchdown catch gave Wake Forest its second straight victory over the Eagles. Paul Peterson threw for 269 yards on 21 of 38 passing, 1 touchdown, 1 interception.

In this game Boston College hurt themselves with another poor field goal kicking performance from freshman Ryan Ohliger. Ohliger missed field goals of 40, 37 and a 27-yard field goal with 3:12 to go in the fourth quarter.


Happy Trails to the Eagles men’s soccer team. The men’s team was upset by the Brown Bears 1-0 on Tuesday at the Newton Campus Soccer Complex. The Eagles dropped the match despite a 20-9 advantage in shots. The defending ACC champions drop to a disappointing 3-3-1 (1-1-0 ACC) on the season. Next up for the Eagles is a Saturday night game in Raleigh against conference opponent NC State.


Quickly ... Did anyone else catch Boston College on FOX’s new show Fringe last week? The show is OK. It’s very X-Files-ish. Anyhow, the first three episodes take place in Boston and J.J. Abrams has this cheesy way of displaying the location of each scene in big block letters. In the second episode, they go visit some professor at – where else? – Boston College. 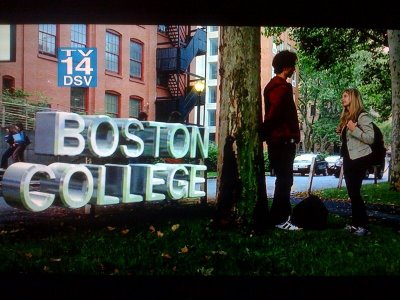 That’s not campus though, is it? Is that Upper campus?