Better Living Through Chemistry and the Big Finish

Share All sharing options for: Better Living Through Chemistry and the Big Finish

Brian: Jeff, Chris Crane says the chemistry wasn't there last weekend between our senior signal caller and our receivers. You agree with him, or is this just an excuse in your opinion?

Jeff: Chemistry does help everything for sure but Crane only has at most 12 more games of his college career so if there is no chemistry there already, it might get a little better as the season progresses, but how much better can it really get? 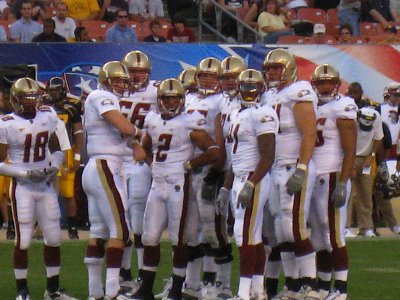 What's hiding underneath Chris Crane's play wristband? Why it's a wallet sized periodic table, of course!

Brian: Not sure by how much Crane can really improve, but it sounds like Crane has at least 2 starts to do so and impress the coaches otherwise we might be seeing a lot more out of Dominique Davis. When asked by ESPN.com's Heather Dinich in his Wednesday audio teleconference whether he would like to see what Davis can do under center, Jags appears to be remaining patient with Crane's development:

"The knee-jerk thing all the time is when is to go ahead and put that new guy in there. If it presents itself and he shows it in practice that we can spot play him, we may do that this week."


Jeff: Didn't we talk several weeks ago about how the players took a class in how to deal with the media? Maybe Chris Crane missed it. My favorite line is "It's almost like we have to get better.''

Brian: Sounds like Coach Jags didn't miss that class. Later in the teleconference, he didn't single out Crane as the sole reason for the loss on Saturday.

"No, I don't think so. It's just a matter of executing our plays and when you have that opportunity to make a play you just have to make it. A lot of times the quarterback always gets way too much credit and way too much blame. But other guys around him have to step up and make plays also. The thing about the quarterback position you have the ball in your hands every single snap and you have to make the play."


But my question would be, how long until Crane begins to lose the confidence of his wide receiving corps and the rest of the offense if his play doesn't get appreciably better?

Jeff: My honest answer is I do not know. Everyone was happy after game 1. Did Crane light it up? No. But then he sucked in game 2 and people, including myself, want to see some other guy get a few snaps against Central Florida. But if Crane comes out and moves the ball down the field for 7 in our first or second possession and we go onto a relatively easy win with Rhode Island next on the list, people are going to get some more confidence in Crane, fans and players. Winning cures all. If things do not go smoothly against UCF, even though UCF is a quality team, I do know what's going to happen.

Brian: Jeff, next week's opponent the Central Florida Knights are tired of losing and want some respect. You think they are a serious threat to knock off the Eagles next weekend?

Jeff: Since the Eagles are coming off a loss, I think our players are going to be much more fired up than they would have been had they beaten Georgia Tech and I think they'll win, but it's not a gimme like Rhode Island and Maryland. Yes, I put Maryland in the same category as the Rams.


Jeff: Now with Tom Brady out for the season, who wins more games this year, the Eagles or the Patriots?

Brian: This is an easy one. Have you seen the Patriots schedule? They may still be a playoff team even with Matt Cassell under center. They play the NFC West this year and six games in the AFC East. That's practically 10 wins right there. Plus both teams have 1 win now, the Eagles have 10 regular season games left while the Patriots have 15. Patriots win more easily.


Brian: Mike Bianchi of the Orlando Sentinel thinks the Central Florida got screwed over by a bad call from the Big East officiating crew in last Saturday's overtime loss to South Florida. His rationale - that conference officials are paid to make their conference's team look good. Your thoughts?

Jeff: People are naturally biased. But did Miami really play at Florida with an SEC officiating crew? If they did, they did get screwed. Usually in those out-of-conference matchups, the home team does not get a officiating crew from their conference.


Jeff: Tomorrow I'll be at Clemson watching the most exciting entrance in collegiate sports around noon when the Tigers touch Howard's Rock and run down the hill. You know I think Clemson will win easily against the Wolfpack, but give me a prediction.

Brian: I think this game is going to be a lot closer than you think. I expect the Tigers to pull out the win, but North Carolina State will make it interesting as Clemson starts something like 4 redshirt freshmen on the offensive line tomorrow. NC State 17, Clemson 24


Brian: Last one, TK's car was recently stolen from the ESPN Washington DC parking garage. He is demanding extra security because he claims it's a stalker. Fess up. The stalker is you, right?

Jeff: My sister did go to Cornell with TK's daughter and I would ask my sister about her but no. I have not been to Washington lately, nor would I stalk Tony Kornheiser if I were going to stalk someone.

Brian: Last week was miserable for us against the spread. I finished 2-3, which was still one better than Jeff's mark of 1-4. The lone team to bail Jeff out last week? Duke football!

As always, a disclaimer. Kids - don't try this at home.

This week I'm going with 5 teams all playing away from home, and going with 4 of 5 favorites.


Jeff: I am also throwing down the all-road warrior Pick 5 this week.


Brian: Enjoy the college football this weekend, and best of luck to all the Eagles sports teams in action. Big ACC men's soccer showdown tonight between #8 Maryland and the 9th ranked Eagles.