Party in the Backfield and Big Finish

Share All sharing options for: Party in the Backfield and Big Finish

Brian: In the notes section of this Herald article about Marcellus Bowman, it is reported that Coach Jags has moved junior college transfer Codi Boek to the running back position. I guess the second coming of Paul Peterson he is not. Sad, really. Jeff, your thoughts?

Jeff: I'm heartbroken. I had high hopes for Codi despite knowing nothing about him. This is big news though compared to where we were back at the beginning of spring practice. We were expecting a 3-man race for the starting qb spot and it is turning out to be Chris Crane's squad. See, Codi Boek hadn't practiced all last season in front of BC coaches and with BC players, he was out in California or something. Davis was on campus practicing alongside Crane. So when Crane got the nod over Davis, it wasn't just because of this spring, it was because of a year of practices where he outshined the frosh. Meanwhile Boek came in and could've beaten both out or become second string or anything. As it turns out now, Chris Crane is CLEARLY our starter and Davis is probably a distant second. Boek must be quite an athlete though if he is going to be put in other spots on the field.

Brian: This also means that the running back situation might not be as sured up as we thought it was. I like the options that Codi Boek brings in the backfield as a dual threat in Steve Logan's offense, but my fear is that we aren't that sure about Josh Haden carrying the load in the backfield.


Brian: Familiarity is a dangerous thing. In her Wednesday live ESPN chat, when asked what 3 games will determine whether Clemson is for real or not, HD rattled off Alabama, Wake Forest and Maryland. Maryland?! So traveling to Chestnut Hill in early November against a team you are 0-3 against in ACC play won't determine whether the Tigers are legit? Jeff, as a Clemson sympathizer, is HD right here, or is this an intentional snub?

Jeff: HD is completely wrong. She just went with her hometown team by saying Maryland. I'll give her Wake and Alabama. If Clemson loses to Alabama who knows what will happen to their season but then after that they need to beat Wake and Boston College. If they win both those games they are headed to Tampa..


Jeff: Three games that will determine whether the Eagles are for real or not ...

Brian: If I use the same formula as HD, and can only pick games from the first half of the season, I'm going with Georgia Tech, Virginia Tech and will reach one game over the halfway point in the season and also say at North Carolina, which many writers and pundits are high on as a dark horse .


Jeff: Last year I told everyone who would listen that the Wake Forest game would determine our fate for the season. Prior to the season everyone was looking to the FSU game when in retrospect that game meant very little seeing as we lost it but still went to Jacksonville. This year I am going to go with the @NC State game. A win here will likely put us at 5-0(2-0), ranked in the top 20 nationally and well on our way to a solid season. However, losing to NC State would probably prevent us from realistically getting back into the top 25 the rest of the season with the remaining schedule we have from that point. Not to mention make it very difficult to defend our Atlantic division crown. 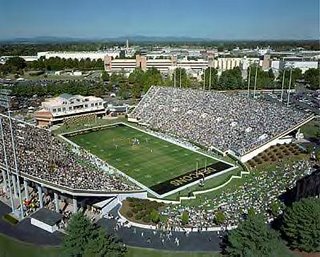 So lets say you can attend exactly 3 regular season games home or away this year, which ones are you attending?

Jeff: I would just replace Virginia Tech with NC State since they are not in our division. Readers, what 3 games would you attend this year? Clearly FSU and Notre Dame are gonna get at least a little love.