Headlines: Can Haden Carry the Load?

Share All sharing options for: Headlines: Can Haden Carry the Load? 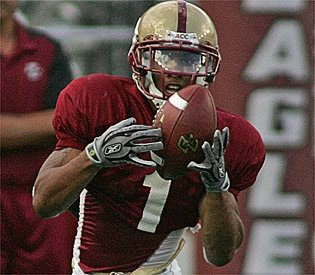 Brian: Jeff, in this Herald article on freshman running back Josh Haden, Logan is quoted as saying that Haden could see up to 20 carries / game. But at 5'8" and 190 pounds, do you think his size will be an issue?

Jeff: Reading that article just gets me more and more pumped for football season to begin. Since the ACC Media Day, numerous articles have come out quoting coaches and players on expectations for this season which has gotten my hopes up and now that I read Logan is as high on Haden as he is, I think the Eagles will absolutely be a factor in and have a chance of defending their Atlantic division crown.

Now back to the question of will his size be an issue - yes. His size is an issue since he needs to be the feature back from the first play of the season. This isn't high school ball anymore so he might get beat up a little as the season goes on. Logan is also clearly concerned because he says he has Haden on a "pitch count" in practice to help prevent a midseason breakdown. But in this article there are plenty of positives to outweigh that negative including that Haden is bench pressing 350 lbs which is not bad for a 190 pound speedster.

Brian: I don't think size will be an issue. Remember a certain Derrick Knight? He was only 5'9" and 205 in his senior season and is the Eagles all time leading rusher with 3,725 yards. So long as the Eagles get improved play from their offensive line, I have no doubt that Logan and the offensive line will have no trouble protecting our featured back for the next four years.

Jeff: If Haden gets to 205 I will have no concerns either but until then we'll see how he's doing 6 games into the season.