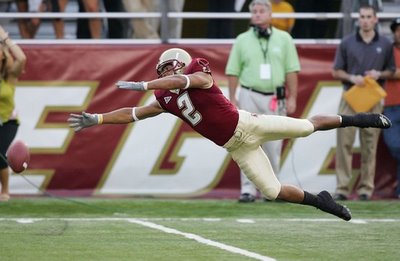 College football is back. Get happy Eagles! If you need any other reason to be happy, well then I don't have much to say to you.

A much better blog than ours, Hey Jenny Slater, compiled the responses to the preseason blogpoll roundtable. Check it out.

We are the Czech Republic. The Czech Republic is a beautiful country, or so I'm led to believe because I've never been there. People always say so. They say that a lot about Charlottesville too. Like the CR, that's just about all they say, most of the time.


We also received the "ballsiest pick of the preseason roundtable" predicting that the TCU Horned Frogs will upset Oklahoma. Also, turns out we ranked Ohio State the lowest of any of the 78 participating blogs in the blogpoll at #8. Sorry, Coach Tressel.

Lou Holtz: Yeah, but let me address the fact that they've won eight straight bowl. But let's be really honest about it. Boston College doesn't really have a great following when they go to bowls. Consequently, they usually end up in a bowl game which is a step or two lower that they should be. I'm not saying against their opponent, but instead of playing a major team maybe from the ACC, etc. they end up playing a non-BCS school. And that makes an awfully big difference. Everybody talks about how Notre Dame hasn't won a bowl game. YOU GO LOOK AT WHO THEY PLAY!

Mark May: ... at least they win their bowl games.


Couple things. First, old man Holtz momentarily either forgets that BC plays in the ACC or can't remember how bowls are set up such that teams don't play teams from their same conference.

Second, while there is a shred of truth in the fact that we have beaten up on some non-BCS conference opponents in our eight bowl wins, we have also played some BCS conference teams. Arizona State in 2000, Georgia in 2001, North Carolina in 2004 and Michigan State last year. Also, we went up to Boise and beat a good Boise State team in a virtual home game for the Broncos. Not to mention that Boise State team went on to go 13-0 the following season.

Honestly, Coach Holtz, if you are going to pick on our bowl winning streak, you could just as easily pick on Utah's 7-game bowl winning streak. Sure, they may have won a BCS bowl, but that was against Pittsburgh. And Urban Meyer isn't walking through that door.

Brian: Jeff, give the Eagles something to watch tonight.

Jeff: You gotta be watching NC State at South Carolina on ESPN and pulling hard for NC State to give the ACC a nice nationally televised victory. I would also check out Wake Forest at Baylor on FSN if you get it but unfortunately I don't think I get it here.

Brian: I'll be on the road to Cleveland early Friday morning but am going to watch the South Carolina vs. NC State tonight and Red Sox vs. Yankees during the day. It's the last time the Red Sox will visit the old Yankee Stadium. Well, what about the playoffs? I'll be the first to admit the Yankees are cooked this year.

Depending on your local coverage, you might also be able to get a glimpse of our week two ACC opponents Georgia Tech as they host Jacksonville State.