Brian: First, tell us a bit about yourself. How did you decide to attend Boston College?

John: This year I'll be a senior at BC and I'll graduate with a degree in history. Originally, I'm from New York, about twenty minutes north of New York City. My decision to attend BC was actually a pretty easy one, but had a lot of contributing factors to it. First, I went to a Jesuit high school and going to a Jesuit university seemed like a natural step to take and I'm glad that I did. I love the Jesuit style of education and my four years at BC have been great. The second huge factor was my family. Pretty much all my aunt's and uncles have attended Fordham, Fairfield, or Georgetown, so there's a long tradition of Jesuit education in my family. Plus, Boston's a great city.


Jeff: We are told you are a member of the Men's rowing team. We really don't know much of anything about Rowing. Tell us more.

John: I've been a member of the men's rowing team since my freshman year and rowed two years in high school before that. In my opinion, its just about the best sport out there. At Boston College, we generally focus on eight man boats which are eight rowers and a coxswain who steers the boat. In the fall, the races we participate in are pretty long - about three miles each - and the season culminates with the Head of the Charles here in Boston. The spring, however, is the main focus of our year. In the spring, the races are on a 2000 meter course (about a mile and a quarter long) and a good boat can come down the course in under six and a half minutes. Unlike the fall where you pace yourself for a longer race, the spring season is a dead sprint for the whole six minutes. Our spring season usually ends with the Dad Vail Championships in Philadelphia, the largest intercollegiate regatta in the world, where we usually perform pretty well. 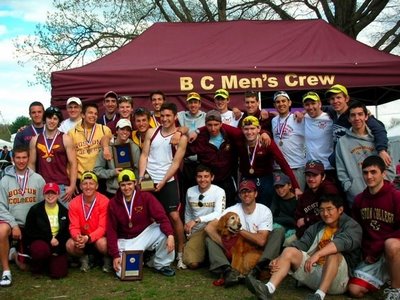 Brian: Who are some of your main competitors in rowing?

John: I'm proud to say that BC Crew is often the team to beat in New England. Up here, our main competitors are usually UNH, UMass Amherst, Holy Cross, and Trinity. In my four years, a BC crew has beaten a boat from each one of these schools. At the national level, our competitors typically are Fordham, Georgia Tech, Delaware, and Purdue. In recent years, the team has been rebuilding, so our records against these schools aren't as good s they are against the New England schools, but it seems that that may change this year with nine seniors, including myself, returning to the team. We're expecting to turn some heads this season.


Jeff: Let's talk a little about this coming season's football team. Make a prediction - Boston College Eagles 2008 record at the end of the season.

John: I've thought about this question long and hard for the last few weeks, looking at the schedule and our competition. I think best case scenario, we finish 10-2, with losses to Clemson and Virginia Tech and worst case 9-3, with an additional loss to Wake Forest. To be honest, though, both Virginia Tech will be traveling to Chestnut Hill in the colder months of October and November and will be facing packed houses in Alumni. It may be a stretch, but I wouldn't be surprised if we beat at least one of these teams and finish 11-1.


Brian: Last one, how excited are you that football season is almost here. What are some of your expectations for the team this year?

John: I realized the other day that about five days after the Olympics are over, college football season starts and I cannot wait any longer. I think overall this will be a great college football season and I'm especially interested to see if Georgia lives up to the hype (I'm a closet Tennessee fan so I wouldn't be horribly disappointed if they didn't).

I think that the Eagles will have a better season than people are expecting. I don't think that we'll see the same success that we did last season, especially all the late game heroics that made my junior year one to remember, but I expect to see some solid play on both sides of the ball. I think Crane will perform well and I'm really excited to see how Josh Haden will do as the starting running back. I think the defense will be our bread and butter though, and expect them to be one of the top defenses in the country once again (I'd like to see CJ Spiller and James Davis try to make it passed the D-Line and Brian Toal on November 8). Overall, I think we'll win the games we're supposed to win and will win tougher ones that we're not supposed to like Clemson or Virginia Tech or maybe even both.

Brian: We like your optimism John. Thanks for joining us and good luck with this year's crew season.


Have something to say? Want to be featured on a future Five Good Minutes? Email us.