Share All sharing options for: Road Trip Report: Brian Back From Cleveland 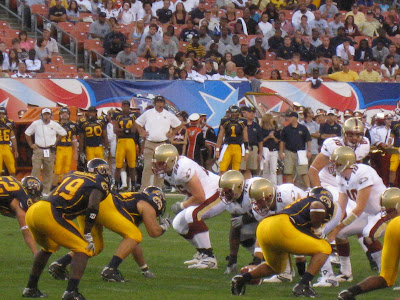 932 miles later and I'm back from Cleveland.

Jeff and I will discuss the game and the opening weekend of college football tomorrow, but I wanted to give you a bunch of incoherent and highly random thoughts on my road trip to Cleveland to see Boston College kick off its 2008 college football season.

Friend of the blog and our BC Interruption NHL bureau chief Christian, his dad Joe and I left the New York City area Friday around 6am and got to Cleveland around 1pm. We got settled at the hotel and decided to walk around to get a feel for the city.

Not that I was expecting much of it, but there was absolutely no buzz about this game on Friday. A guy was standing at the front of the hotel waiting for his car to be valeted and saw that we were wearing Boston College gear. He started up a conversation asking about why we were here, who BC was playing, etc. He was a Michigan grad so he knew all about the Wolverines season opener in the Big House, but nothing about the BC game being played a few blocks away. (I didn't have the heart to tell him I thought Utah was going to beat Michigan). As we walked around the city Friday, only the occasional Superfan or maroon t-shirt could be found. 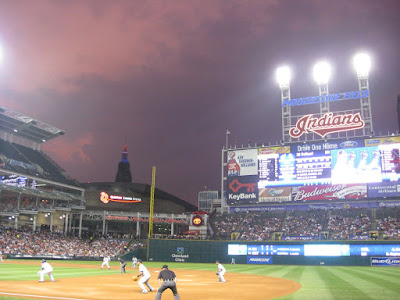 We went to Progressive Field to see the Indians vs. Mariners game on Friday night, and to cross another major league ballpark off our list. The stadium was really nice, one of the better stadiums I've been to. On par with Citizen's Bank Park in Philadelphia, Safeco in Seattle or Camden Yards in Baltimore. After an hour rain delay, the lake-effect rain quickly blew through and the game started at 8pm. The Mariners beat the Indians 3-2 behind a Raul Ibanez home run and seven strikeouts from Seattle starter Felix Hernandez. 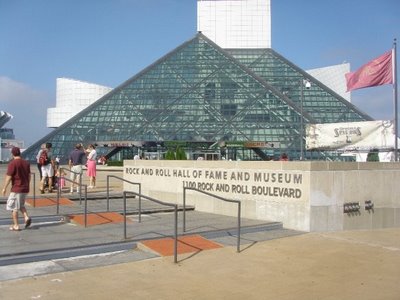 On gameday, in the morning we grabbed a quick bite to eat and visited the Rock and Roll Hall of Fame. As far as Hall of Fames go, this one is pretty cool. We were fully expecting to see the different inductees on plaques a la Cooperstown or Yankee Stadium's Monument Park. However the Hall is much more a museum dedicated to rock music than a shrine of bronzed statues. A few more BC superfan shirts and members of the whale pants crowd are spotted during the morning at the Hall of Fame. I feel a tiny bit better about the Eagles showing at this game.

Later during the day, one of my friends was texting me and telling me he was pretty nervous about this game. The biggest unknown going into the season was obviously the play of senior quarterback Chris Crane, and my buddy was sweating his performance. I wasn't very nervous about the game, but my friend's nervousness and lack of sleep the night before had me a bit concerned. However, when I was forwarded Reverend Mike's guest blogger post on Eagle in Atlanta, I was put at ease. I totally buy the fact that Boston College wins when we wear our all-white uniforms and crashes and burns when we wear any other combination of away jerseys. Proof that Reverend Mike's science is true:

Sample size may be a little too small, but I totally buy into this. When I arrived at the game and found out that BC was wearing the all-white jerseys, I was completely at ease.


Here's the thing about Cleveland. The city isn't all that big. We walked across the downtown area in about 10 minutes. However, there are some really cool big ticket items you need to see if you've never been to the city before. In order, they are:

Outside of these big ticket items, that's all there really is to see in Cleveland. Unless you consider the tour of the house from the movie A Christmas Story to also be a big ticket item. I personally can't stand that freaking movie. This may be compounded by the fact that when I go home for the Christmas holiday, certain members of my family insist on watching the movie 24 hours straight during the holiday. Guhh. 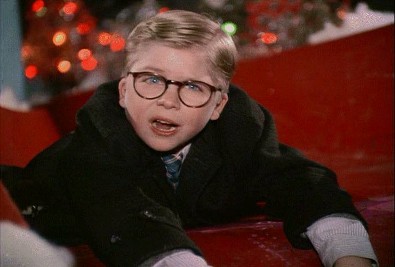 Note: Unfortunately, I did not make the A Christmas Story house tour on this trip.

After the Rock and Roll Hall of Fame, we went back to the hotel to brush up on some of the other college football games going on during the day. We watched the second half of the Virginia Tech vs. East Carolina game and watched the Hokies get Beamer balled. Admittedly, I was half rooting for the Pirates to pull off the upset, but felt bad about this fact knowing that if the Pirates won, the ACC would look awful. Still, the Hokies did kill the Eagles dream season last year so I felt justified in rooting for the Pirates if only for this one game. Full disclosure: I wasn't expecting the bottom to fall out with Clemson's loss Saturday night to Alabama in the Georgia Dome, so I thought rooting against the Hokies was mildly acceptable.

A bit about the Patriot Bowl. How did Boston College end up in this game? My understanding is that the Greater Cleveland Sports Commission set up this game to pit a MAC Ohio team (Akron, Kent State, Miami Ohio etc.) against one of the service acadamies to kickoff the college football season. Last year, Army played Akron to a crowd of 17,865. The game was set up with an average expected attendance of 30,000+ given Army's road and neutral site attendance in 2007. The Boston Herald hit the nail right on the head when they described yesterday's atmosphere as a cavernous Cleveland Browns Stadium. A mere 10,788 attended the game, with probably 55-60% cheering for local Kent State. Visiting Boston College against an average MAC team just doesn't have the same draw as one of the service academies. 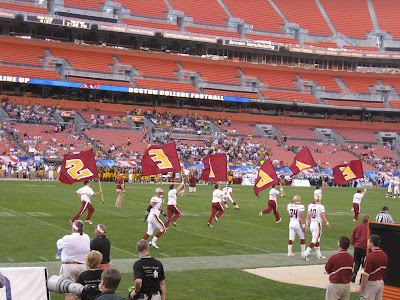 Kent State's on campus stadium seats 29,287, and my guess is a lot more people would have attended the game if it had been a home game for Kent State (even if Kent State has only gone to two bowls in their school's history, the last being in 1972). I don't expect the Eagles to ever play in this game again. For this game to be a viable neutral site college football game going forward, I would imagine the game will have to include a MAC Ohio team and one of the service academies who isn't Army.

Besides, there is only one college football team anyone cares about in the state of Ohio and they were playing earlier that day against Youngstown State.


We got to the game and our seats were in the first row. Which isn't saying much because a lot of attendees were able to sit in the front row if they wanted. We got to see up close a BC team that looked unlike anything we've seen before from the Eagles. 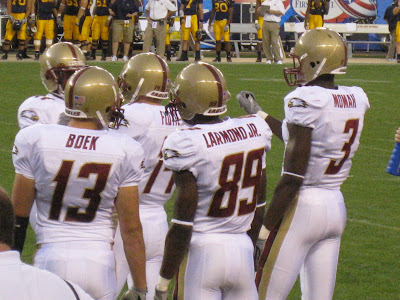 Sitting close to the action, one thing that struck me is the size of some of our players. Since Jeff and I graduated, I think the Eagles continue to improve our recruiting classes by bringing in bigger and stronger athletes. At 6'4" 240 pounds, Crane is built. It will be hard for defenses to stop him as he swings around the outside on pitches, options and quarterback sneaks. I was also surprised at how tall guys like Colin Larmond Jr. and Purvis were. Seems like we are in good hands for the next few years. 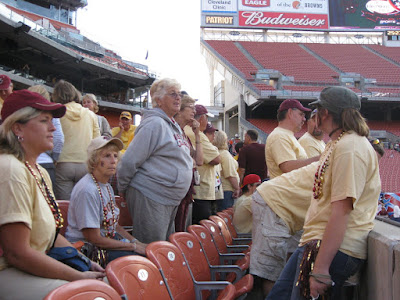 On an unrelate d note, I am totally opposed to this Gold Rush gear the Athletics Department marketed to our season ticket holders. Our fans just look straight up confused. While I understand that this new gold matches more with the accent colors on the uniforms the football, basketball and hockey teams wear, a lot of Eagles fans are still wearing the yellow-gold colored Superfan shirts. Others are wearing football jerserys or maroon shirts. There's no unity. We just look disorganized. Awful. If we wanted to switch up our fan gear in favor of this new Gold Rush gold, we should have redesigned and/or reprinted the Superfan shirts to match and held some sort of Superfan t-shirt trade-in program.

Adding to the confusion were the Kent State t-shirts that were colored Superfan gold.

I also found out two things I didn't know about everyone's most hated ESPN affiliate, ESPN U. ESPN U is 1) based out of Charlotte, NC, not Bristol and 2) now broadcast in HD. 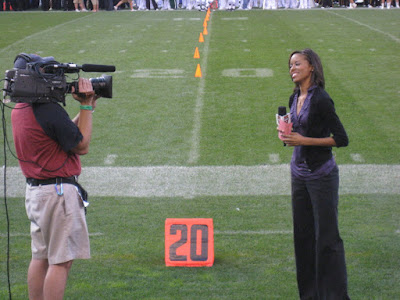 While I leaned over the side of the seats, I noticed the ESPN U sideline reporter reapplying makeup. Our conversation went something like this:

Me: Don't worry about it, you look fine.
ESPN U Sideline reporter: Yeah, but ESPN U is now broadcast in HD.
Me: ...

A minute or two later.

Soon there after, she made her way to the opposite sideline, probably because she didn't want to be bothered anymore. Conclusions I draw from this encounter:

1. She would have much rather been covering an SEC game than the Patriot Bowl between Kent State and Boston College
3. People are much more self-conscience of how they look knowing that they are being broadcast in high def.


Overall, a pretty good trip to Cleveland. Even though the city is fairly small and doesn't have a whole lot to offer, I'd imagine it was better than a weekend in Kent, Ohio.

Also making the trip worthwhile was seeing the Eagles got the job done. The defense was solid and the offense showed a lot of promise. Given the giant suck that was the rest of the ACC this weekend, the Eagles didn't commit any major mistakes and Crane was effective. No penalties, no turnovers. Add to this the defense shutting down Eugene Jarvis and I'd say mission accomplished. Few teams across the country can boast a shutout in their first game of the season ... even Chattanooga got 2 points.

More on the suck that is the ACC tomorrow.

One win down, thirteen to go.