As Simple As ABC: Differences between Clemson and BC

Share All sharing options for: As Simple As ABC: Differences between Clemson and BC

Jeff: There are plenty of differences between BC and Clemson. Some are very obvious and some ... not as obvious. Clemson has a football national championship, BC does not. Death Valley seats 80,000+, Alumni seats 45,000. Clemson seems to start off ranked high in the preseason and BC always seem to start outside the top 25. Clemson is in South Carolina where there is not a single major pro sports team and BC is in Boston where pro sports are king.

Then this past weekend, I was helping my fiance and her son move into their/our new house. It was during this that I noticed some more differences that I had not noticed before.

First, there was a trip to Home Depot to buy paint. During this trip while I was waiting for paint to be mixed up I picked up the Glidden Team Color pamphlet to see if Boston College was in there and to my shock, they were! Two years ago I did some painting in my house and had to try to find the right maroon and gold myself which has since been criticized as looking like ketchup and mustard. 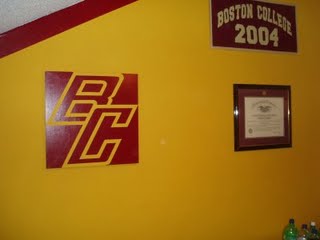 Before doing this painting, the first place I went was to Home Depot because I had seen the commercial for the team colors there. Of course, they had schools like Clemson, but no BC. I was thrilled to see BC make the cut this weekend, but of course other schools have made the cut since I last checked. Among those schools are DePaul, Providence, St. John's, East Carolina, UCF, Rice, Houston, UTEP, Tulane, Idaho, San Jose State, FAMU, University of Delaware, James Madison and Norfolk State. Now, the good people at Glidden are not some biased sports writer filling out his preseason ballot. They are simply trying to make money selling paint and apparently BC is expected to sell about the same amount as James Madison because our team colors were not added until theirs was also. It's a harsh reality but a reality nonetheless.

Second, as we were in the middle of moving, Carter, my soon to be 7 year old step son, told me several times that I need to start pulling for Clemson since I am entering their family. Now, my fiance didn't even go to Clemson, nor did Carter's father, but Clemson is their team and even at age 7, Carter knows it and is probably going to keep reminding me throughout football season until the BC-Clemson game. How many 7 year-olds are out there that are passionate about Boston College who don't even go to or watch the football or basketball games and parents are not alum? Probably not many or 0. 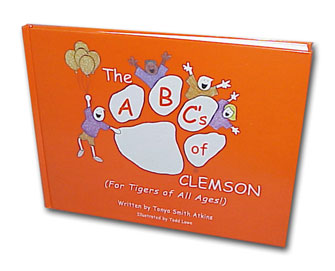 Third, after Carter had left to be with his dad for the weekend, I was unpacking Carter's books and putting them on his bookshelf in his new room. During this I came across multiple children's books about Clemson. Finally I sat down and read one called The ABC's of Clemson. This book had things in it like D is for Death Valley where the Tigers play football with a nice illustration of the stadium packed with fans. Is there a children's book called the ABC's of Boston College out there? If so, I need to get my hands on one ASAP. But I am guessing that the answer is no.

If you have been reading this blog for a while you probably notice that Brian and I debate why BC continually gets snubbed for bowl selections and why it seems BC is always underrated in the preseason. I think the events of my past weekend point out some of the realities that college sports are just much much much bigger in parts of the country other than the Northeast. Money talks and BC just doesn't sell merchandise like a lot of other schools do.