Share All sharing options for: ACC Football Media Guide and the Big Finish 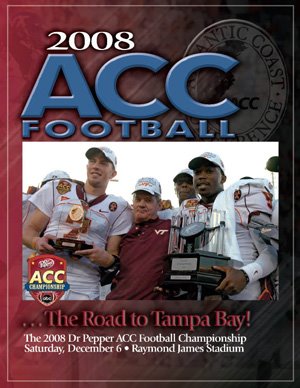 Brian: The ACC released its 2008 football media guide yesterday (the cover is painful to look at). Let the media spin begin as to why the sky isn't falling for ACC football! Thumbing through the pages, here are some interesting factoids of note in the Boston College section. Did you know ...

Boston College is 13-6 (.684) in bowl games and is the all-time winningest team in bowl history.

Brian: I was also very surprised to see how close the all-time series records are of some of Boston College's tougher 2008 opponents are:

Brian: Two ties with both Clemson and Wake?! I'm sure Clemson would have liked to have had ties the first two years we were in the league!

Jeff: Kinda similar to our bowl record, the Clemson and Notre Dame record is thanks to recent success.


Brian: Jeff, ESPN released their college soccer recruiting rankings for 2008 and Boston College finished 11th nationally. Fellow ACC member Maryland topped this year's list at #1. In addition, Wake Forest (2), North Carolina (4), Virginia (7) and Duke (10) all were ranked higher than the Eagles. So after dominating the Atlantic Coast Conference last year - including both the regular season and tournament championships - but a very disappointing first round exit to Massachusetts, what do you expect from the men's soccer team in 2008?

Jeff: It's gonna be extremely difficult to repeat in the highly competitive ACC.

Brian: I'll remain optimistic at this point and say that Boston College can repeat as ACC champions. We have two tough road matchups in Maryland and Wake Forest, but we get Duke, North Carolina and Virginia at home.


Jeff: Former BC soccer star Charlie Davies was named to the US Olympic team. He must be the only former Eagle heading to Beijing, right?

Brian: I'd imagine so. Otherwise I'm sure we would have heard about another Eagle Olympian. The games start one week from today. Best of luck Charlie in representing our country.


Brian: Role play - Coach Jagodzinski coached Brett Favre during his stint in Green Bay. What does he think of this whole soap opera?

Jeff as Coach Jags: Brett, if you wanted to keep playing, why did you retire?? But you can still be my starting QB anytime.

Brian: Has there ever been this much media attention and favoritism towards one athlete before? I just want this story to go away! How do you think it will end?

Jeff: I think Farve will be the Packers starting quarterback this year.

Brian: You bet. I'm still working out road trip plans to be in Cleveland for Labor Day weekend.