No Love from EA Sports and the Big Finish

Share All sharing options for: No Love from EA Sports and the Big Finish 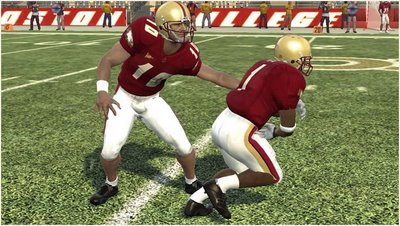 Brian: Jeff, with the fiance out of town, I caved and bought EA's NCAA Football 09 yesterday. A little part of me died inside knowing that I had to buy the XBox 360 version with Darren McFadden on the cover instead of the Matt Ryan Playstation 3 version, but I carried on. (NOTE: If anyone gets the PS3 version, color photocopy the cover and send it my way. I'll tape it onto my copy's box. No joke.)

The gameplay is fairly good and a bit of a step up from the 2008 version, and I was excited to see the mascot game put into the XBox version. Here's my one major gripe with the game though. I'm thinking "This is cool. Matt Ryan is on the cover of one of the versions of the game and we finished Top 10 last season. BC has to be decent in this game, right?"

Wrong. I thought they would at least use the rankings from the end of last season, but no ... EA in its infinite wisdom has already moved on to 2008 preseason rankings before a down of football has been played. Gah. So because BC is always underrated and rarely shows up in the Top 25 preseason poll, are we are getting ripped off here? I mean, we are only a 77, which is better than exactly 1 FBS teams we play this season (Kent State). You're kidding, right? Are the makers of EA's popular college football video game Notre Dame graduates? What gives?

Jeff: It is hard to believe that we are ranked below Georgia Tech, UNC, NC State, Notre Dame, Maryland and Central Florida. Hard to believe. I mean our defensive rating should be top 10 in the country and that should bring the total team rating up above at least some of those teams. I have no answer for you, Brian.


I mean, it's just a video game, but are we ever going to be good in this game? I realize EA has to sell video games but Florida State a 99 on defense? They are not even ranked preseason Top 25! Duke has the same overall ranking as BC. Duke! 1-11 Duke. I want my money back. EA has forced me to play every game as the Baldwins, since the mascot teams are all 99s.

Jeff: Southern Pigskin agrees with you. Year after year, everyone sleeps on Boston College football. Never discount the Eagles, right?

Brian: Like I said yesterday, I hope everyone keeps sleeping on the Eagles. Eventually, the rest of the conference and the media will warm up to taking the Eagles seriously in the ACC.


Brian: ESPN.com's Heather Dinich ranks Boston College defensive line #3 of 12 in the ACC next season, only behind the Georgia Tech and Clemson defensive lines. Are we getting short-changed, or is that cool with you?

Jeff: In BJ Raji I trust, so I am not cool with that. We should be #1. This is totally the BC bias coming out of me but I will refuse to believe that anyone's line is better than ours next year.


Jeff: Last one, earlier this week you were planning on attending the Home Run Derby but instead stayed in to watch it on TV. More impressive performance of 2008 - Rice's first half against UNC or Josh Hamilton's 28 home runs in the first round?

Brian: With all due respect to Rice, Hamilton's was the much more impressive feat. Although, unfortunately, both ended up losing the competition. I'd imagine it won't be long until you see Josh Hamilton in a NY uniform (Mets or Yanks).