Brian: We are back from the dog-off that was Fourth of July weekend.

Jeff: Since the season tickets are in my name, I received the "Gold Rush" pamphlet last week. For those of you who have not seen it, a pamphlet went out to all non-student season ticket holders with pictures of various student-athletes sporting new gold BC gear that is available for purchase for really cheap prices. Coach Jags also has a letter in there pleading that everyone wears gold to all the home games.

Brian: I overheard one of our friends talking about this promotion this past weekend but wasn’t really sure what it was all about. Jeff, your thoughts?

Jeff: First, let me say that this is a great idea. Sometimes coaches are forced to put their names next to things that might not have been their idea at all but I wouldn't be at all surprised if Jags was the driving force in this initiative. He seems to be all about having fun and creating a great atmosphere at Alumni. To give you an idea of the prices, a basic gold t-shirt with a BC logo on the left chest is only $7.50. Meanwhile you can get a full zip fleece jacket for just $18.00 and there are several other bargains. The Superfan section has looked great for years and it would be awesome if the whole stadium looked like that. Brian: Not sure how I feel about this idea. I mean, this is a great idea for basketball or hockey. The Conte crowd looked pretty awesome a few years back when we played North Carolina in basketball and ESPN’s College Gameday came to town. Problem with football is that unless a large percentage of the crowd is wearing the same color, it doesn’t look that impressive. Plus if it rains the effect is lost as everyone will put on their jackets and ponchos. It’s all a little too gimmicky for me, too similar to the Notre Dame green jerseys and the FSU blackout a few years ago. We are 22-3 at home over the past four seasons with fans wearing whatever color they want in the stands. Does this give us any more of a home field advantage or make Alumni anymore intimidating? Probably not.

Jeff: There are some other problems I have with this initiative. First is the fact that these shirts are a different shade of gold than the Superfan shirts. Well, maybe the Superfan shirts are more mustard yellow anyway, but why not use that color since it has stuck for a while now? Also, included in the sale is a basic maroon baseball cap, a maroon knit cap, and a maroon scarf - I thought this was a GOLD rush!?

Brian: I always thought it would be cool if the Superfan section was Superfan yellow and the rest of the stadium was clad in maroon. However, with this Gold Rush campaign it sounds like the crowd will just look like it doesn’t know exactly what our school colors. 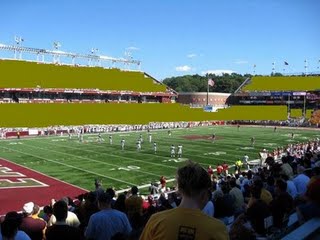 Simulated Alumni Stadium Gold Rush: you be the judge