Happy time, Eagles! Brian is on the road in Boston for the 4th. Leave your BC bookstore orders in the comments section below. 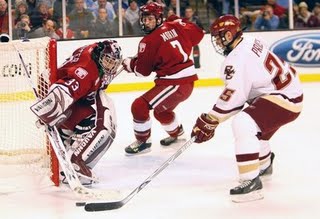 Happy Birthday wishes to Eagles young and old. Happy Birthday Matt Price. The Eagles ice hockey sophomore forward, Price tallied 3 goals and 8 assists in 44 games this past season. Also, Happy Birthday to Bob Carrington. Carrington is a retired NBA player who played guard-forward on the Heights. He was selected as the 11th pick of the 1976 NBA Draft's second round by the Atlanta Hawks. Carrington only played 2 years in the NBA – playing for the Atlanta Hawks, New Jersey Nets and Indiana Pacers in 1977-1978, and for the San Diego Clippers in 1979-1980.

Happy Trails to Mayor Menino’s approval of Boston College’s 2000 Commonwealth Ave. acquisition and the institutional master plan. The mayor roundly denounced the plan and calls on Boston College to "listen to the neighbors." The acquisition of 2000 Comm Ave, however, was a move to house 560 additional undergrads on university property. The move positions BC to be the first Boston university to be able to house all undergrads on campus. So Menino is opposed to us buying 2000 Comm Ave and opposed to BC building dorms on the new Brighton campus. What's a school to do?

Happy Anniversary to ex-BC netminder Cory Schneider. On this day one year ago you decided to forgo your senior season with the Eagles, signing a professional contract with the Vancouver Canucks organization. At the time, it seemed like a monumental blow to the chances of Boston College returning to their third straight Frozen Four. Hindsight, I guess, is 20/20. John Muse filled in nicely as a true freshman as BC finally got over the hump and took home the school’s third national championship. The move seems to have worked out for both Schneider and the Eagles. BC got their championship, while Schneider won the starting job for Vancouver’s AHL affiliate Manitoba Moose. Last season, Schneider went 21-12-2 with a 2.28 GAA and 0.916 save percentage in 36 games. Best of luck to Cory next season.