Approximately 30 days left until kickoff in Cleveland, so there are plenty of reasons to get happy.


Light on Boston College birthdays today, so we wish a Happy early Birthday to BC netminder John Muse (August 1). 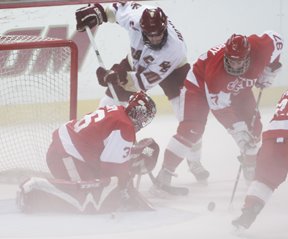 Happy Trails to Boston College adding air conditioning to Conte Forum for another 2 years?! In his live chat session, DeFilippo noted that the fog-like conditions that have led to 3 games being shortened is a problem, but that the school will not install air conditioning until the summer of 2010. My back of the envelope math tells me that’s two more seasons where fog could be an issue for the men’s and women’s ice hockey teams. Pretty embarrassing. Boston College opens the season October 10 vs. Wisconsin. Hopefully fans can see the banner being raised through the fog.

Has anyone else caught BC’s Luke Russert filling in as Stat Boy on Pardon the Interruption the last two days? Nice work Luke!