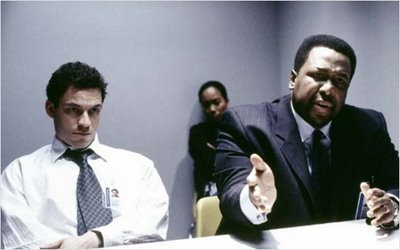 Today we play a little good cop / bad cop on some of the more interesting storylines of the offseason. Let's get our first suspect:

Brian as Good Cop: I know we have had a good run the past few years, but in reality, for most of these 24 seasons, we haven't been very good. To be honest, recent grads have been very spoiled when it comes to BC basketball. We have only averaged 17 wins / season over that time span, and have been wildly inconsistent. A 9-19 in 1994-1995 following by a 19-11 season the following year under Jim O'Brien. 6-21 in Al Skinner's second year followed by a 27-5 record two years later. The criteria awards points for only NBA draft picks in the top 10, and while we have put out some quality NBA talent over the past few years, no one has been drafted Top 10. And if the NCAA Tournament selection committee didn't think it was so amusing to put BC up against under seeded opponents and old Big East rivals, we probably would have gotten a few more points in the NCAA tournaments. Plus the ranking system awards Conference titles, of which we only have exactly 2 (both in the Big East). Meanwhile, schools like Butler, Chattanooga and College of Charleston can rack up the Conference title wins in the who-cares mid major conferences of the country. ESPN probably should have awarded some points for Top 25 finishes, which would have gotten BC a little higher, but I am OK with this ranking. We are a football and ice hockey school, not a powerhouse basketball program.

Jeff as Bad Cop: Between 2000 and 2007, BC was not top 50, not top 30, not top 25, but a top 10 basketball program in the nation over that span. Multiple Big East regular season and tournament titles and then one of the top teams in what is without a doubt the premier basketball conference in the land – the ACC. So I don't care how far back you go before that, BC does not fall out of the top 50 at least. It's BS that there are mid-majors ranked above the Eagles.

Brian as Bad Cop: I will play the bad cop. This schedule stinks. I know we can't control how many home games we get against Boston University (we are on the road for 2, only get 1 at home), but for the one home game we DO get with the Terriers, don't put it on the same day as the ACC Championship in Tampa. I mean, I know the media doesn't think much of our chances to repeat as Atlantic Division champs, but there's a shot, right? Why schedule even the possibility of such a conflict for Eagles fans? What's also missing from this schedule is the marquee out of conference away game or opening tournament away from Conte Forum. In years past, we have traveled to Notre Dame, Michigan, North Dakota and Wisconsin in the beginning of the season. York usually uses those games to prepare the Eagles for the Hockey East and National tournament. I also don't like the idea of playing two exhibition games in January, which opens up the possibility of injury. We all see how much the team struggled for a good portion of the year due to injuries and team dismissals. I realize that in years past we have played in tournaments and invitations over the winter break, but at least those games count towards your tournament resume. These don't.

Finally, BC deciding to raise the championship banner when Wisconsin comes to town? Weak. I understand the need to get the banner up there when the season begins, but it would be so much cooler if we got to raise the banner in front of Notre Dame, or even New Hampshire or Boston U.

Jeff also as Bad Cop: It is impossible to play good cop on this one. This schedule does suck. Great point on the BU game and we did raise the banner during Notre Dame weekend back in 2001 so why not do it again? Especially since we beat Notre Dame in the final!


Suspect #3: Jags changing his mind about using First and Toal

Jeff as Good Cop: Jags should've never had to change his mind about this. He should've been planning on using First and Toal all along. Haden is going to lose weight as the season goes on from carrying the load at RB and he is not very big to begin with so that doesn't exactly fit the mold of a goal line back. Meanwhile Smith will hopefully be there to split some of the backfield duties but Jags better not be risking injury by putting him in during goal line situations. Love it or hate it, First and Toal is the way it should and will be.

Brian as Bad Cop: What’s wrong with Dan Mulrooney? Between Mulrooney, Haden and Smith, we have plenty of options on the goal line. Let the skill players play their position. Giving the ball to Toal in goal line situations says to our team members who are actually running backs that we don’t have the confidence in them to get the job done. Also, First and Toal smacks of Tom O’Brien desperation and gimmickry. I find it hard to believe Steve Logan won’t get creative close to the goal line and be resigned to using the battering ram that is Brian Toal. You can throw the element of surprise out the window as soon as Toal steps onto the field and joins the offensive huddle.


Suspect #4: Haden to have the most receptions of any Eagle RB, ever

Jeff as Bad Cop: Slow down there, fast car. Haden hasn't even caught one ball yet, let alone set any records of any kind. Jags, you don't have a first round draft pick at QB anymore, why don't you hand the ball off to Haden a few times first? Josh can get his feet wet and Chris can stop shaking, then maybe, come the third or fourth game, you can start drawing up plays between "rookie" QB and true freshman out of the backfield.

Brian as Good Cop: This quote is coming from good authority in former Boston College coach Jack Bicknell Sr. So long as Steve Logan stays for Josh Haden’s four years, I can definitely see Haden breaking the Eagles running back record for receptions. Haden is small and fast and Logan will scheme the offense to his strengths. I see Haden being dynamic out of the backfield as a receiving threat as Logan tries to extend the field vertically.

Jeff as Bad Cop: This article is a joke. It is still too early to say that expansion was a good or bad thing. Unfortunately, there were a lot of rumors involving expansion and who knows, maybe some recruits actually went away from ACC schools to another conference because they didn't know what was going to happen. And the stars of last year, for example, Matt Ryan, were red shirt Sophomores the first year the ACC had 12 teams. Similar to when you hire a new coach, you need to give the league an entire cycle of recruits before you evaluate its performance.

Brian as Good Cop: Boston College and Virginia Tech have kept ACC football afloat the past 3 years. Consider the alternatives. What if Virginia Tech wasn’t invited to the ACC in favor of Syracuse (as per the original plan of Miami, Boston College and Syracuse)? The ACC would have instantly become the 6th best BCS conference over the past 3 years and the college football world would have been talking about revoking the ACC’s automatic BCS bowl birth instead of the Big East’s auto birth. The idea behind expansion was that Florida State and Miami would be the perennial national title threats. Three years later and both of those programs are in serious rebuilding mode, and the only teams that have finished 1st or 2nd in their respective divisions the past three years are … Boston College and Virginia Tech. The only knock on Virginia Tech is that they are a miserable 1-3 in bowl games as a member of the ACC. This doesn’t help the perception of ACC football when you can’t win your bowl games.