Food Chain: Most Intimidating Away Stadiums

Share All sharing options for: Food Chain: Most Intimidating Away Stadiums

Brian: We have just about passed the halfway mark between Memorial Day and Labor Day and the football coverage has slowly started to pick up. If you couldn't tell, the dog days of summer are tough times for us sports bloggers. We are forced to come up with cute little lists, polls and preseason predictions. One such list was that of EA's 25 toughest stadiums in college football which corresponded with yesterday's launch of EA's NCAA Football 09 (ahem, Matt Ryan on the cover of the PS3 version).

Largely, Heather Dinich's ACC blog on ESPN.com has had some great material, but this list of ACC's most intimidating stadiums, in response to EA's Top 25 toughest stadiums, was a little lacking and left us wanting more. This initial list made some ripples on the internets, and elicited this humorous response from the NC State blog State Fan Nation. Dinich must have gotten so much flame mail that she took it upon herself to rewrite her blog post, reranking the toughest ACC venues (BC moved from #8 to #9).

We decided to take this idea in a different direction. Today we consider which away stadiums that we've seen the Eagles play in are the most intimidating places to play in college football. Key word here is intimidating, people. Not best atmosphere, best tailgating, or most attractive co-eds. Off limits - neutral site games like the Diamond Walnut Bowl, Champs Sports Bowl or the ACC Championship. We consider the following 8 stadiums we have visited over the years in arriving at a top 5.

We consider the following 8 stadiums and ask you, our readers, to weigh in on the most intimidating stadium you've ever seen the Eagles play in.

Brian: Setting aside the fact that Syracuse football has become a shell of the program it once was, the Carrier Dome was rocking during our senior fall. Boston College had just announced that they were leaving the Big East for the ACC and Syracuse let us hear about it. It certainly didn't help that we got kicked in the teeth in a 39-14 beat down. The dome is a very sterile environment but the dome roof amplifies the sound fairly well. Plus the Carrier Dome sold beer (not sure if they still do), so the students were more than rowdy during the game.

Jeff: Baby blue is so not manly that it almost has the Iowa pink locker room effect which makes you forget that you are at a football game and you just want to scan the student section for co-eds. It makes for a very non-VT like home field advantage.

Brian: I was unable to make the undergraduate rite of passage and make the road trip to South Bend while attending BC, so I picked up and made the road trip fresh out of undergrad two years later. While I don't find Touchdown Jesus that intimidating, the 80,000+ here can get pretty loud. The wooden-bench seats and the bowl shaped stadium help amplify the crowd noise. 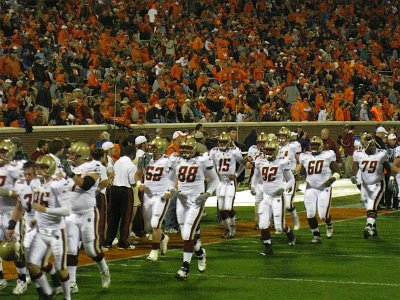 Jeff: For those of you that have yet to make this trip, you got a taste of it when Clemson fans came in large numbers to Alumni two seasons ago and cheered often and loud, wore all orange, and took over all of the Cleveland Circle bars. When you go to Memorial Stadium, just multiply the number of people wearing orange by 10 and the volume as well. Be careful if you go to a day game in September though, just ask Brian about the dehydration he suffered from in 2005 after drinking too many Bud Lights and not enough Gatorade. And oh by the way, the team running down the hill which is the middle of the student section is truly the most exciting non-game moment in college football.

Brian: This stadium has an odd structure in that one side of the stadium has a triple-deck stand while the other side has a low bowl where most of the students are seated. A lot of the crowd noise is lost because of this structure. I couldn't honestly tell how intimidating this stadium can get because Maryland seats visiting fans in the upper right corner of the trip-deck stand.

Jeff: I was simply awe struck by the size of this monster stadium. In 2003 when BC last played there BC basically dominated the game so the true noise level potential of the stadium was not felt. However, we were given a few glimpes of the possibilities and I would love to go back in the future. A white out in Beaver Stadium would be a sight to see.

Brian: Psych. This might as well have been a neutral site game. 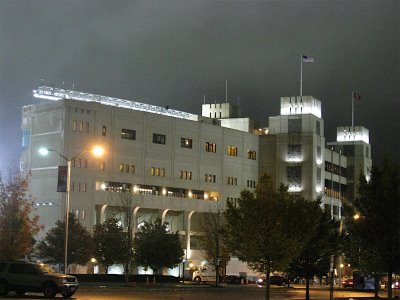 Jeff: THE BEST STUDENT SECTION IN THE ACC. And when you have the best student section for day games, you can only imagine the night games. It will be a long time before I miss a BC game at Lane Stadium.

Brian: I don't think there is a more intimidating venue than Lane Stadium on a Thursday night. Last year, the rain and general dreary conditions blended in perfectly with a sea of Hokie maroon and orange. And I would argue that the Virginia Tech entrance to Metallica's Enter Sandman with 65,000+ delirious screaming students and fans rivals Clemson's "Running Down the Hill" as the best non-football event/tradition.

5. Carrier Dome, Syracuse - it's a shame Syracuse football has regressed over the last few years, but I'm excited to see the rivalry renewed again in a few seasons. The Carrier Dome can rock.
4. Notre Dame Stadium, Notre Dame - gotta give those Irish some props
3. Beaver Stadium, Penn State - has potential, but 21-0 BC after one quarter took the crowd out of the game pretty quickly
2. Memorial Stadium, Clemson - the best 25 seconds in college football, a sea of orange and C-L-E-M-S-O....N, this place gets loud
1. Lane Stadium, Virginia Tech - Enter Sandman and 65,000+ tightly packed, screaming Hokies make Lane one of the toughest stadiums in college football

Honorable mention: BC Interruption has yet to make it to Florida State's Doak Campbell Stadium. We're assuming that once we do, that will instantly crack the top 5. And we'll see how Carter-Finley stacks up to this list in a few months.

5. Kenan Stadium, UNC - I need to attend more away games so this gets knocked off the list. So many BC alum and students make the trip to ND that ND becomes less intimidating.
4. Carrier Dome, Syracuse - The Dome makes such a huge difference in the noise level.
1. Memorial Stadium, Clemson - The atmosphere is AWESOME but the intimidation level only gets a tie for 1st.
1. Lane Stadium, Virginia Tech - I'll say it again... The best student section in the ACC and keep in mind their student section is at least 3x BC's.
1. Beaver Stadium, Penn State - 100,000+ is intimidation. I remember reading that our players were very nervous because of the size before the 2003 game.