Share All sharing options for: Headlines: NHL Entry Draft and Other Hockey News 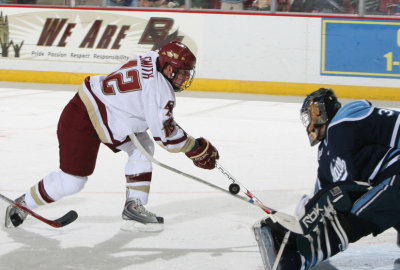 Brian: We start with a college hockey story in June, Jeff's favorite topic. The NHL Entry draft was this past weekend in Ottawa and saw 1 Boston College Eagle and 2 Eagle recruits get drafted by pro teams. Not a bad weekend for these Eagles. What was surprising from this past weekend's draft was the absence of players from US colleges. Only 4 players were taken in the first round, a year after the NCAAs had 11 drafted in the first round. The second round picked up a little where 9 NCAA players were picked in rounds 2-7. Do you think this will be a recurring theme in future NHL drafts where less and less college hockey players will be drafted into the NHL in favor of junior league and European players, or is this simply a down year for talented collegiate hockey players?

Jeff: First, can I get a benchmark average. Is 3 Eagles being drafted a good year for us?

Brian: Well last year only Benn Ferriero was drafted in round 7 (196th overall) to the Phoenix Coyotes. In 2001, when we last won the National title, probably our most talented class in the last 10 years, we had 4 Eagles drafted - Chuck Kobasew to Calgary in round 1 (14th overall), Matti Kaltiainen drafted by the Bruins and Ben Eaves by the Penguins in round 4, and Andrew Alberts (6th round, 179th overall) to the Bruins.

Jeff: Ok sounds like a comparable draft class to years prior for the Eagles. But as for that trend to European players, NEWS FLASH... hockey is DYING in the United States. Popularity of the sport at the professional level has a direct correlation to involvement at the junior hockey level which develops future NHL stars.

Brian: Not sure if hockey is dying but I do think the recurring theme is that the NHL teams are drafting kids right out of high school, the under 18 National team, and the junior leagues. Kids are also probably more prone to jumping from college to the pros before their four years are up now more than ever, a trend we are also seeing more and more of in college basketball.


Brian: The Boston College hockey team will also visit the White House on Tuesday and meet the president to commemorate this year's National Championship. Jeff, what's the closest you've ever come to meeting the President of the United States?

Jeff: I've been to Washington, DC. That would be the closest I've been. In other words, not close at all, and that is perfectly fine with me. What about you?

Brian: I came within a tiebreaking vote of being elected the National president of a certain service organization while in college. If elected, one of the perks was delivering a year-end report to the President in March. So fairly close, but I'm also fine with not having met the President.