Brian: Over at ESPN.com it's never too early to discuss college football and bowl predictions (we applaud this mentality). Today we break down the ridiculously early bowl projections of Mark Schlabach. Here are the predictions from an ACC perspective:
Golfing come December? Tom O'Brien and the 'Pack, Virginia, Georgia Tech and Duke.

What, if anything, can we glean from these early projections, keeping in mind Schlabach gazed into his crystal ball and correctly slotted Boston College in the Champs Sports Bowl last year? (Note: Ivan Maisel's predictions for BC a year ago ... not so much. Maisel had BC staying home in December last year. Oops. Let it be know Maisel will not be posting his mileage on the warrior board today.)

Jeff: I think Mark Schlabach is right on the money here or at least close as far as predicting where BC will play. Let's say BC goes 8-4 (4-4) which I think is a conservative estimate. 8-4 puts BC in the conversation for every bowl from the Champs Sports Bowl down to the Humanitarian Bowl. Orlando is going to take FSU or Miami over us regardless of record because of proximity and ability to sell tickets. Meanwhile, the Meineke Car Care Bowl is going to take a team from North Carolina for the same reasons. That leaves BC in the conversation for the bowl games in Nashville, San Francisco, and Boise. Going to Nashville would be nice but even though Miami does not travel well either, Miami is still "the U" and I wouldn't be surprised if BC drops to San Francisco.

Brian: Remember Jeff that in order for those bowls to take Florida State or Miami over us, they'll have to be within a game of us in the ACC standings. I am sort of impartial to these bowl projections at the moment. The bowl selection process has left me cold. At this point, anything but Boise would be nice. So, assuming Schlabach is right, will you make the trip out to San Francisco again (like we did in 2003)? And what Pac 10 teams would you love to see fall to this bowl with BC? 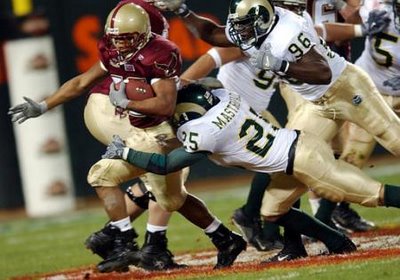 Jeff: The last time that BC played in San Francisco they played Colorado State and we made the trek out there. If BC plays a Pac-10 team of course I'd be there. My order of preference of Pac-10 teams to play would be UCLA, Oregon, USC (should be #1 but we know we're playing them in a few years), California, Arizona State, Oregon State, Stanford, Washington, Washington State and Arizona.

Brian: I like your list of Pac 10 teams. If the Eagles do fall to the San Francisco bowl part of me just wants to see a cupcake Pac 10 team so we can extend our bowl winning streak to 9 games and help out the national perception of ACC football.