Share All sharing options for: Happy Time: Anevski, Bell, and the CWS

Happy Birthday Boston College football OG Tom Anevski. #67 spent four years on the Heights from 2004-2007 mainly as a backup offensive lineman (first for Josh Beekman and then for Cliff Ramsey). Anevski saw his most action during his junior year, where he played in all 13 games. A Cincinnati, Ohio native, Anevski was invited to Cincinnati Bengals minicamp on May 2 of this year.

Happy Anniversary Troy Bell. On this day 5 years ago, you were drafted in the first round, 16th overall to the Boston Celtics in the 2003 NBA Draft. Bell unfortunately didn’t get to play for the home Boston crowd, however, as he was traded on draft day to the Memphis Grizzlies along with Dahntay Jones for Kendrick Perkins and Marcus Banks. Troy Bell played in a total of 6 games for the Grizzlies in 2003-2004. He was briefly picked up by the New Orleans/Oklahoma City Hornets the following season but never saw any playing time. Bell was last spotted playing for the Angelico Biella team of the Italian Serie A league for the 2007-2008 season. 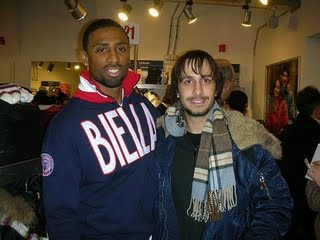 Happy Trails to yet another College World Series. The CWS concluded last night with the Cinderella Fresno State Bulldogs knocking off the Georgia Bulldogs 6-1. Why this is particularly noteworthy for Boston College and ACC fans, you ask? The ACC failed yet again to bring home a National championship in baseball. The ACC CWS title drought now stands at 53 years and counting (Wake Forest won the title for the conference last in 1955). The failure to take home a title for the conference is compounded by the fact that the ACC received six invites to the field of 64 this year. Not to mention 4 of the 6 teams as #1 seeds in the tournament – Miami, Florida State, UNC and NC State. Ouch.