We welcome back to the blog Bill Maloney (BC '98), the Eagle in Atlanta, for five more good minutes. Read part 1 of our interview with Bill.


Jeff: You've been an Eagles fan a little longer than us. What is the best BC sporting event you have ever attended?

ATL_Eagle: Another tough question. There are many that could make the cut, but I have to go with the Clemson game from last season.

I was on the air with the ZBC guys that day told them how at ease I was. The reason I wasn’t doing my normal gameday pacing was because I thought we’d lose. I had given up hope of the ACC Championship and was just going to enjoy the game. When halftime rolled around and we were hanging around despite not playing well, I started to get my hopes up. You know how it ended. Being in a hostile environment and seeing BC win the game to send us to that elusive next level was a great experience and will probably be my ultimate game until we win an ACC championship or a New Year’s Day Bowl. 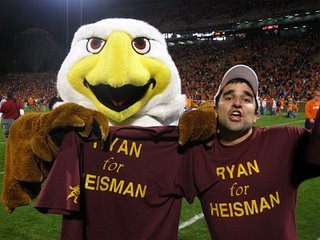 Yep, some of us had a REALLY good time at the Clemson game.

Brian: The Clemson game was a great game. Eagles fans have been treated to some instant classics over the past few years. But it wasn't always like this. During your time on the Heights you witnessed some mediocre to downright ugly football seasons. Thinking back to your time as an undergrad, did you ever think the Eagles would enjoy the success that they have had on the gridiron in the 2000s?

ATL_Eagle: Bear with me for a moment as I take you down memory lane and provide a few boring details on my life. I applied to BC in the fall of 1993. I got my acceptance around the time of the Notre Dame game and that spring I also got to see my new school beat No. 1 North Carolina in basketball. I was set. Little did I know that would be one of the peaks in BC sports. While I was at BC I witnessed the full meltdown of the football program via Henning's mismanagement and the gambling scandal, the three worst years of the Jerry York era as he rebuilt the hockey team and the destruction of the basketball program due to Jim O'Brien's pissing match with the admissions office. Yet amidst the mess there were moments of hope. Henning won a bowl game and actually brought in some decent talent. Jim O’Brien – who I couldn’t stand as a coach – made two tournaments. York got us into the Frozen Four by my senior year. I never doubted that BC could be back in the mix (ever to excel and all that jazz). College sports don’t lend themselves to parity like the pros, but there have been enough cases in my lifetime as a fan (Northwestern and Kansas State football, seeing a program like Gonzaga become a perennial power in basketball) to feel confident that BC can always compete. If we can rebuild after the stuff that went on in the ‘90s we can overcome anything in the future.


Brian: Switching to basketball, who's to blame for last season's uninspired performance? Skinner, GDF, or the team for mailing in the second half of the season?

ATL_Eagle: In my season grades I put most of the blame on Skinner. There were a few issues that came together for a big disappointment. He didn't have another talented piece in the Senior class to bridge between the Dudley and Rice eras. He also didn't have a talented Soph. That was the major issue.

I also think he could have and should have made some adjustments during the ACC losing skid. Would it have made a difference? I don't know. We were very young...

Finally, I think Skinner needs to make a major change in his defensive coaching. We've been a poor defensive team for far too long.

I think Skinner is a very good coach and I think we'll improve. But I also feel we are still a year away from being a tourney team again.


Jeff: Last one, who finishes the season with a better conference win percentage next year - men's hoops or football?

ATL_Eagle: I am not sure yet but at this point I think it will be football. I think we’ll go 4-4 or better in the ACC this year. So that means hoops would have to get to at least .500 in ACC play. Can they? Sure, but I am not putting money on it.

Brian: I'm not holding my breath on basketball either and agree football will go 4-4 or better. Thanks for joining us Bill.


The Eagle in Atlanta blogs about all things Boston College athletics. His blog, atleagle.com is very popular with BC students and alum and has been going strong since December 2004.