Today we welcome to the blog possibly our youngest reader and Eagles fan, Sean. Sean keeps us old guys in check with a young, fresh perspective on the state of BC athletics.

Jeff: Sean, thanks for joining us today. First, tell us a little bit about yourself.

Sean: I became a Boston College fan in 2006 when my brother became a student there. Since then, I've been a loyal fan and have watched, followed, or listened to whatever BC game I could. I am also a die-hard Philly sports fan who hopes to see the day the Phillies, Flyers, Eagles or Sixers take home a championship.

Brian: Growing up in South Jersey a New York sports fan, I feel your pain. Philadelphia has been hurting for a championship for years.

Brian: Since you are relatively new to following BC maybe you have a different perspective than us. What do you expect out of our football and basketball team on a yearly basis? .500 seasons? Conference championships? Top ten nationally?

Sean: In sports other than hockey, we must have low expectations. In terms of the basketball team, Al Skinner has simply not established the recruiting base we need to compete with ACC powers such as Duke and North Carolina. We must hope than Al can continue to pull "diamonds out of the rough," players major powers overlooked like Dudley, Rice, Bell, Smith and Williams. We can’t expect to compete with Duke and UNC on a yearly basis. We can use the fact that most of our players stay all four years to our advantage, trying to build team chemistry and make an occasional run in the tournament (2001, 2006).

Football is similar but we have a broader and better recruiting base and we have good coaches who can take mediocre recruits like Ryan, Callender, Silva and Dunbar and turn them into players that can compete with major conference and even national powers such as Virginia Tech and Notre Dame. Overall, we can hope for good seasons and the occasional highly nationally ranked run, but we must remember we are not a major recruiting power who can automatically recycle Top-10 recruits.

Jeff: Other than the Virginia Tech and Clemson games last year, what are your other favorite games you've watched as a BC fan?

Sean: The best games I've ever watched other than those are the ice hockey National Championship game versus Notre Dame, another win in football over Notre Dame, and the home basketball game against North Carolina where Rice dropped 46. I was amazed about what he did in that first half even though we lost.

Brian: What do you think BC should do differently, if anything, to promote higher attendance for games?

Sean: We need better attendance for all our sports. What students need to realize that there are alumni and huge fans like me who are long drives away from Conte and would do anything to get to a basketball game but can't. And there are students who live two minutes from Conte but can't muster up the strength to go to the games! They need to realize that they must go on behalf of Superfans spread out all over the country. So you don't like basketball, hockey or football. Still go! It's fun to go, meet new people, hang out with friends and just have a good time. Take pride in your school and show spirit!

Jeff: Were you disappointed when Tom O'Brien jumped ship and took the NC State job?

Sean: In the beginning, yes, because he may have been the definition of quality (not quantity) and "average", but he was an established coach who seemed to squeeze 8 or 9 wins out of every BC team. However, I don't think Matt Ryan would have developed as much as he did under Tom O'Brien. Matt Ryan needed an established NFL Coach like Jags to help him mature as a future NFL QB. Jagodzinski and Ryan were the perfect match, because Jags encouraged Ryan to use his great football IQ, and Jags gave Ryan the freedom to call his own plays, which Ryan had the intelligence to do. Overall, I feel Coach Jags is the better guy for the BC Job. Lets just see how good a recruiter Jagodzinski is before we make a final judgment.

Brian: Who will win more games over the next ten years: Boston College or NC State?

Sean: BC will because Tom O’Brien needs to take an NC State program that is down and he needs to take them from the top. He also needs to establish a stronger recruiting base down South than he did while he was at BC. On the other hand, Coach Jags inherited BC when they had a Top 3 NFL Draft QB, and he got a team that was poised to have its best season in 67 years. BC was at the top when Jags came in, so I think BC will win more games over the span of 10 years than North Carolina State. 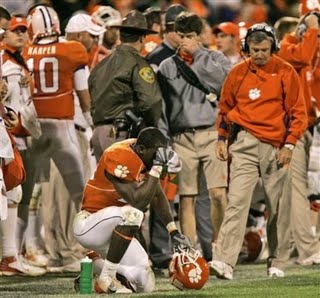 Jeff: Looking to next season, make a prediction: will Clemson finally get over the hump and beat BC this year?

Sean: I feel we match up well with Clemson. Our strength will be run defense. Their strength will be the run game. I think BC Clemson will be a close, but with a whipped-up Alumni, a smothering run defense, and a Clemson team that just can't finish the job against us, I think BC pulls out a late victory on a Sid-Vicius field goal and the Eagles beat Clemson for the fourth straight time.

Brian: Last one, reviews are certainly mixed as to what will happen to Boston College football in 2008. Your thoughts on the 2008 Eagles performance?

Sean: When I think about what the BC football record is going to be next year, I'm stuck between 8-4 and 10-2. 10-2 is a little bit of a stretch but because we have somewhat of a weak schedule, I think there's an outside shot. Ultimately, I think BC football will be 9-3 this year with losses to Wake Forest, Maryland, and North Carolina.

Brian: We can only hope you are right about the 9-3 record in 2008. Thanks for joining us Sean.