Thoughts on ACC Football and the Big Finish

Share All sharing options for: Thoughts on ACC Football and the Big Finish 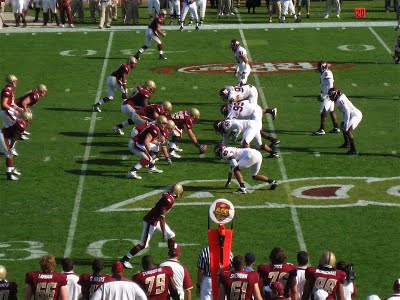 Brian: Because it's never to soon to discuss college football. Jeff, The News & Observer's ACC NOW blog predicts another rough season for the ACC. Is the conference headed in the wrong direction for football? And what teams do you look to to change the national perception of ACC football?

Jeff: I hate to say it but I think the reputation of the ACC next year rests on Tommy Bowden and Clemson's shoulders. Clemson is going to get a lot of press preseason with the returning trio of Harper, Spiller and Davis. Add to that another top 5 recruiting class and expectations for Clemson are finally high again on a national level. (Clemson fans think they have a shot at a national championship every year.) If Clemson can put together a 10-2 or 11-1 regular season the ACC will have a team in the top 5 or 10 nationally all year. And the reputation of the league will really depend on whether or not the BCS bowl representative can get a win. And very simply Clemson has the best chance of doing that because of their talent level and Virginia Tech couldn't get it done last year so no reason to think they can this year. If the ACC can't get a BCS win this year, they need one real soon.

Brian: Gah. Typical homer pick from Jeff. What about Boston College? This blog post cites Virginia Tech's 42-11 record since joining the conference and its ability to beat up on the lowly Coastal division. BC has quietly gone 30-9 (16-8) over our first three years in the league. Plus we have to go through the best team in the league every year (Virginia Tech) and miss out on beating down on Duke and North Carolina every year. If BC can put together another ~9-4 season this year, we have to be looked at as one of the premiere teams in the league, no?

Brian: Well, you could have gone the other way and said a resurgence from Miami or Florida State would best help the perception of ACC football and you didn't. I agree that this is the year for Clemson to lose the conference (again), and I'm sure Tommy Bowden will figure out a way to screw it up. And I think the window is closing for Clemson. Looking beyond this year, the only thing that will help change the perception of ACC football is a) ACC teams winning bowl games and b) an about face from both Miami and Florida State. As I have argued before, the ACC doesn't help themselves by not putting the best teams in the best bowls (see: a BC win in the Champs Sports Bowl, a Clemson and Virginia loss in their bowls). And even if Boston College were to go 10-3 or 11-2 the next three years straight, there would still be naysayers about the Eagles and about the conference. The ACC needs Florida State and Miami to be dominant again.

Jeff: Clemson is the conference's best chance THIS year.

Brian: ACC brass and coaches rejected the proposal for a nine-game conference schedule. The current arrangement runs through the 2010-2011 seasons. You surprised?

Jeff: Not at all. It will happen eventually though.


Jeff: 2008 pre-season NIT lineup rumored to be BC, Cornell, St. John's and Loyola (Md.) in the BC site. BC makes it through the opening round and will be playing in the semifinals at the Garden, right?

Brian: Yes, given that lineup I would expect the Eagles to be playing at MSG with me in attendance. If the Eagles can get to NYC, it would be full circle for Tyrese Rice as I saw him at MSG as a freshman against Michigan State in the Jimmy V Classic. He was pretty raw and inexperienced and threw up some ugly 3 point attempts in that game.

Brian: That's because it's May and not November for Tommy's Tigers.