Is Gerbe The Real Deal? and the Big Finish

Share All sharing options for: Is Gerbe The Real Deal? and the Big Finish 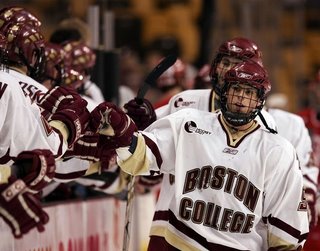 Jeff: I was out on the golf course yesterday with a former Miami (OH) and a former Denver hockey coach and they both agreed that Nathan Gerbe was the real deal and he would succeed in the NHL. I have no knowledge of hockey and should concede to their expert opinion but I am still not quite sold on why Gerbe left early and how successful he'll be in the NHL. Are you?

Brian: I completely understand why Gerbe left. He accomplished it all. National Championship, Hockey East Championship, Beanpot. I understand wanting to go out on top and taking your game to the next level of competition. And I don't think Eagles fans could have asked any more of the junior forward. I, too, am no hockey scout but I look at what Gerbe accomplished, especially late in the season, and I can't help but think that Gerbe is more talented and did more with less than Brian Gionta did in 2001. The 2001 Eagles team was loaded with talent and it seems like Gerbe (not withstanding some stellar goaltending from John Muse) put this team on his back. Apparently there is a chance that he could play for the Sabres as early as next year which is a pretty big deal. We'll also see how Gerbe performs against NHL competition this summer for Team USA.

Jeff: I would disagree that Gerbe didn't have some help on this team. I mean Muse alone was a lot of help. And maybe their road through the tournament was a little easier than the 2001 team had it. It's tough to compare so we'll never know for sure. I do wish him the best but am disappointed he didn't stick around for one more year.

Brian: Jeff, Joe Paterno is in my camp in favor of a playoff system for college football. He also mentions that he's only going to be the coach into his 90s! What's more shocking? That Joe Pa goes against the Big Ten or that he publicly stated he'll be coach until he's 96.

Jeff: Joe Pa is not retiring and he's been around long enough that he is bigger than the Big Ten so neither are shocking.


Jeff: The AJC's Mr. College Football has circled November 1 as one of 5 games that will determine the ACC crown next year. Will you be attending?

Brian: If it's a day game (fingers crossed). I am running the NYC marathon the next day, and if its a night game on the Heights, I'm screwed!

Jeff: Brian, stop trying to win everyone over by pointing out what a great deed you did. Believe it or not, I would've done the same thing.

Brian: Just saying. The funny thing is we were just talking about having never caught a ball before it happened. If you've never caught a foul ball though, go attend a game in Miami or Pittsburgh.

Everyone have a great Memorial Day weekend.